The release of flash PMI surveys in the coming week will provide important steers for the economic performance of major economies midway through the fourth quarter. The tri-annual Business Outlook Survey will meanwhile offer a more sentiment-based view of global business conditions.

Official data highlights include durable goods and housing data for the US, plus an updated estimate of German GDP. In Asia, key releases include Japan's inflation and trade numbers, as well as Taiwan's export orders and Thailand's GDP data. The minutes of RBA's November meeting will meanwhile be scoured for clues of the next Australian interest rate move. 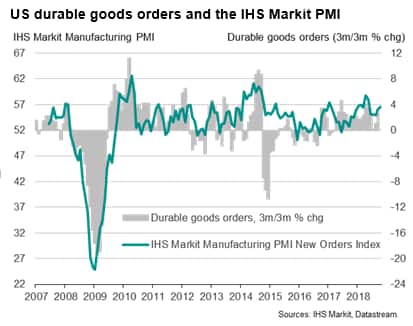 The week starts with publication of IHS Markit's Global Business Outlook Survey and ends with November's flash PMIs, collectively providing a valuable insight into current and future economic trends around the globe.

Conducted three times per year and based on data collected from 12,000 companies worldwide, the Global Outlook Survey is the largest of its kind, asking PMI survey respondents to report on their plans for the year ahead, including production, capex, hiring and pricing plans. As such, the survey forms a natural opinion-based complement to the monthly fact-based PMI surveys.

The Outlook Survey comes at an interesting time: October's PMIs showed that the worldwide expansion is running at its slowest for two years as trade worries and political uncertainty intensified. Signs of slower growth in key emerging markets, notably China, have been accompanied by especially disappointing PMI numbers in the Eurozone and UK. 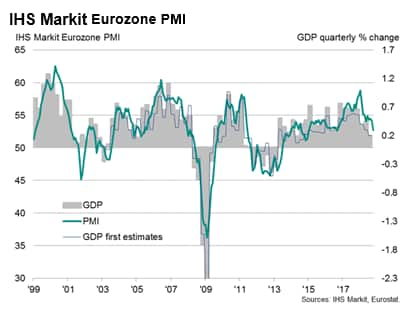 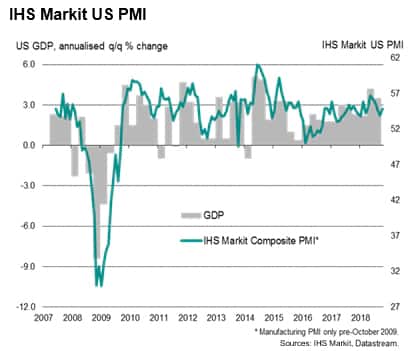 The Eurozone flash PMI will be especially eagerly awaited, especially from a policy perspective, as the ECB has yet to formally acknowledge that risks have become skewed to the downside. A trade-led slowdown pushed the euro area PMI to two-year low at start of fourth quarter.

The flash PMIs will also help clarify the US economic picture, as recent months have seen distortions due to weather. Robust October PMIs indicated a solid star to the fourth quarter, commensurate with GDP growth of approximately 2.5%. But the expansion in part reflected a weather-related rebound, meaning November's surveys will be gleaned for better clues as to underlying growth momentum. Meanwhile US price pressures continued to run at the highest for a decade.

Flash PMI results for Australia will also be updated. Fears have risen for a soft fourth quarter after October's PMIs showed the weakest expansion in the CBA survey's two-and-a-half year history.

In Japan, the market consensus is for 1.0% annual growth in core inflation, still well below the Bank of Japan's 2.0% goal. Latest Nikkei PMI surveys continued to show selling prices rising at an historically strong rate, but still not sufficiently as high as to indicate that consumer inflation is reaching the target any time soon. With inflation remaining subdued, more measures from the BOJ may be necessary to maintain the current ultra-accommodative monetary settings.

Analysts will eagerly await Japan's October trade figures, particularly exports, for insights into the impact of trade wars. The PMI Index of New Export Orders, which exhibits a near 75% correlation when applied with a two-month lead, pointed to a near flat growth in official exports for October. 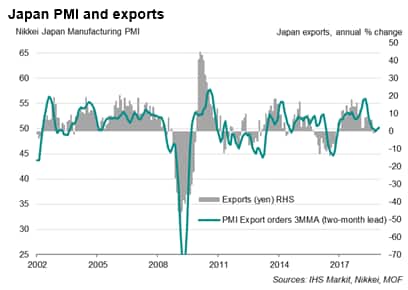 Download the article for a full diary of key economic releases

If you would like to receive this report on a regular basis, please email economics@ihsmarkit.com to be placed on the distribution list.