Sub-Saharan Africa saw economic activity stall during the third quarter of 2021, as a wave of the COVID-19 Delta variant led to heightened lockdown measures and a slowdown in demand. The region also faced disruption to supply chains that not only curbed production but also led to further marked rises in costs and output charges. However, with tighter lockdown rules appearing successful in reducing the spread of the virus, the loosening of measures led to a modest recovery in demand towards the end of the quarter, helping business confidence improve to the highest for 19 months in September.

PMI survey data covers seven countries across Sub-Saharan Africa that account for approximately 60% of GDP in the region. A GDP-weighted average of these series has been calculated to provide an overview of the economic trends up to the third quarter of 2021.

On average in the third quarter of 2021, the IHS Markit Sub-Saharan Africa PMI Output Index posted 50.0, indicating that business activity levels were unchanged overall. This compared with a reading of 53.0 in the second quarter, that was concurrent with an estimated annual growth of 10.1%.

The slowdown signalled in the third quarter was largely due to a renewed contraction in output during July; the first seen in exactly a year. Since then, output has slowly recovered, with the monthly index rising to a four-month high of 51.3 in September.

Large parts of the region suffered from a marked rise in COVID-19 case numbers during the third quarter of the year, which led several countries to impose tighter lockdown measures to curb its spread. As a result, new business levels rose only modestly over the quarter, with the weakest rise recorded in July.

Businesses in Sub-Saharan Africa also noted some difficulties with processing new orders due to raw material shortages. Among the items reported in short supply were metal components such as steel and aluminium, timber, packaging and electrical items, all of which have seen record global supply shortages during 2021. 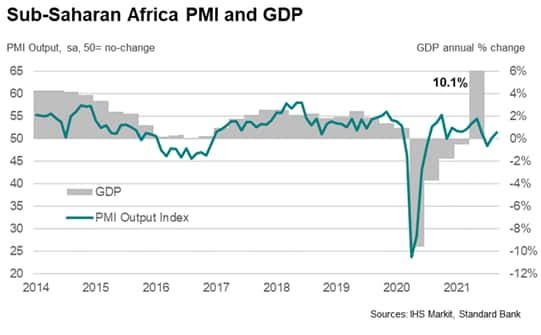 Only two of the seven monitored countries in the Sub-Saharan region saw an expansion in output over the third quarter, down from four in the second quarter. Nigeria drove most of the upturn as demand for goods and services remained strong and all broad sectors registered growth. Kenya meanwhile saw a slight rise in activity as loosening curfew and lockdown measures led to a recovery in demand, although rising living expenses offset part of this positive impact.

At the other end of the scale, Uganda recorded the steepest downturn of the monitored nations in the third quarter. The Ugandan government imposed a 42-day lockdown that led to sharp declines in business activity during July and August. Similarly, a wave of COVID-19 cases led the South African government to tighten lockdown measures in July, while businesses in some provinces were also affected by civil unrest. This culminated in the worst quarterly performance since the third quarter of 2020.

Zambia recorded a further decrease in output over the third quarter, albeit one that was modest overall. More positively, there were back-to-back expansions in new orders for the first time since mid-2018, offering hope that activity will begin to expand soon.

Mozambique and Ghana both registered fractional drops in output that contrasted with modest expansions in the previous quarter. Notably, Mozambique saw a tightening of lockdown rules that constrained overall activity. 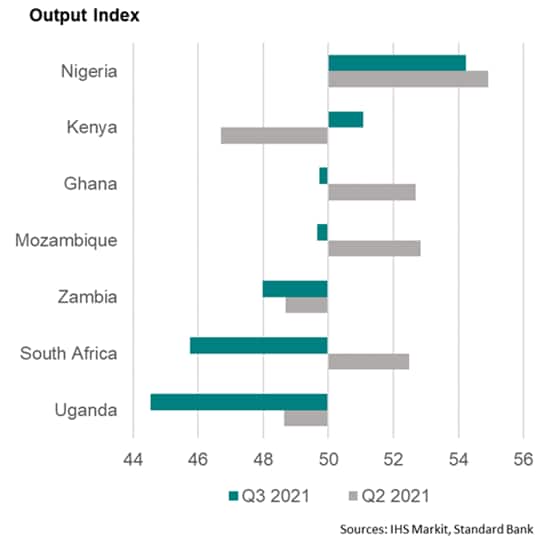 Whilst output was unchanged in Sub-Saharan Africa during the third quarter, there was a modest uptick in new orders, which bodes well for the fourth quarter. This helped firms to continue adding to their employment numbers, meaning that staffing levels have now risen in each of the past six months, after falling in 13 of the prior 14 months. 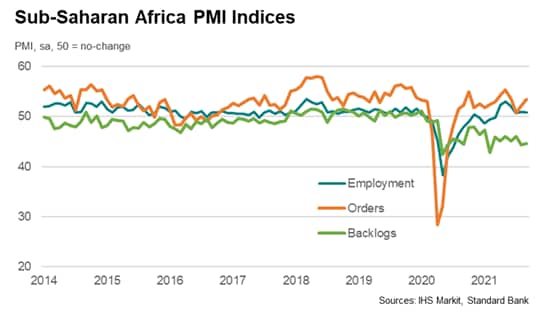 Moreover, five of the seven countries recorded an upturn in job numbers during the third quarter. Correlating with the trend for output, Nigeria saw the fastest increase in employment. Mozambique, Kenya, Zambia and Ghana also recorded overall expansions.

The two countries that saw the greatest disruption from lockdown measures in Q3, Uganda and South Africa, also saw a reduction in staffing capacity. That said, job cuts in the latter nation were only fractional. 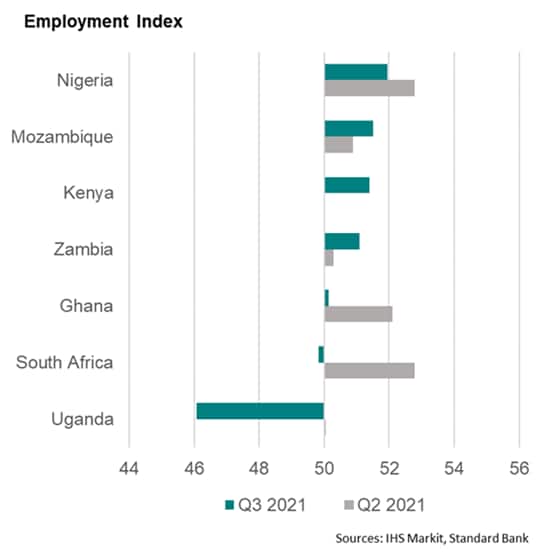 As seen around the world, Sub-Saharan Africa faced strong inflationary pressures in the third quarter of the year. The rate of input price inflation eased from the second quarter but remained one of the highest since this series began in 2014. Central to the markup in prices were supply side challenges, as businesses continued to face a lack of input availability that translated into higher raw material costs. Rising fuel and transport prices were also often mentioned by panellists.

Sub-Saharan businesses passed these costs onto their customers during Q3. Notably, average prices charged rose at a quicker pace than that of input costs, and by the widest margin seen in the series history. Nigeria recorded the sharpest increase in output charges, while Uganda was the only country to see an outright decline over the third quarter. 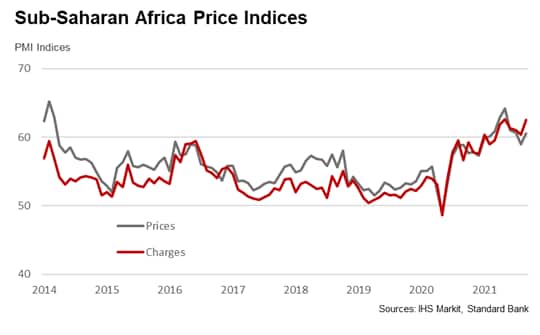 Most of the Sub-Saharan region saw COVID-19 cases fall in September, supporting a roll-back of restrictive measures. As well as helping activity to recover, confidence regarding future output also strengthened in the latest survey period. In fact, business optimism rose to the highest since February 2020, before the first wave of COVID cases, though it remained slightly below the average level seen before the pandemic. 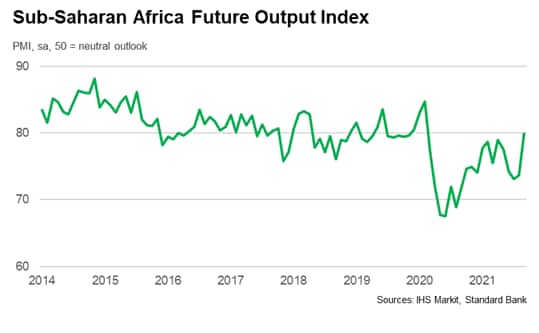