Eurozone business activity growth slowed in March as the economic impact of Russia's invasion of Ukraine offset a boost to demand from the further reopening of the economy from COVID-19 restrictions.

Firms costs and average prices charged for goods and services rose at unprecedented rates as commodity prices surged higher and supply chain delays hit the highest since last November. Falling exports meanwhile led a renewed cooling of demand and business confidence sank to the lowest for nearly one and a half years as companies grew increasingly concerned about the outlook.

Thus, although the survey's indicators of current output beat consensus expectations, the details of the PMI sub-indices reveal a considerably darker economic outlook compared to that seen in February, tilting the risks firmly towards slower growth and higher inflation in the months ahead. 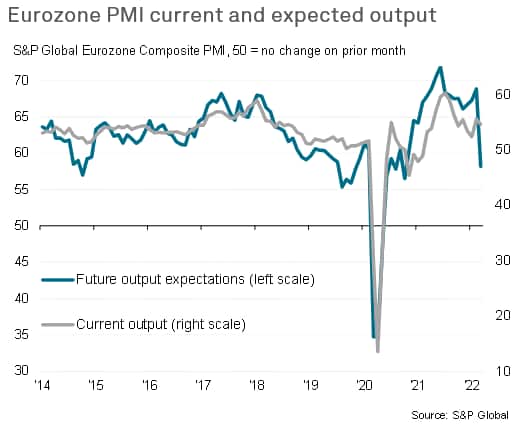 The headline S&P Global Eurozone Composite PMI® fell from 55.5 in February to 54.5 in March, according to preliminary 'flash' estimate*. The reduction indicates some loss of economic growth momentum from February's five month high but still signals the second-strongest expansion since November. The rate of expansion also remained above the survey's pre-pandemic long-run average and broadly indicative of GDP rising at a quarterly rate of just over 0.5%. 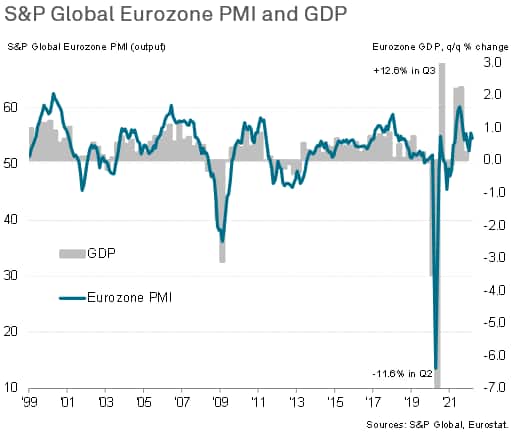 While firms - notably in the service sector - continued to benefit from resurgent demand linked to the further reopening of the economy from COVID-19 containment measures, companies also reported that the Ukraine war and accompanying sanctions had led to weakened demand, rising uncertainty, higher costs and renewed supply chain issues.

Manufacturing output growth waned most sharply, dropping to the lowest since last October as new orders placed with eurozone factories rose at the slowest pace since the recovery from the first pandemic lockdowns began in July 2020. New export orders for goods fell for the first time in 21 months.

Business activity and new orders in the service sector also rose at reduced rates compared to February's rebound, led by a renewed drop in service sector exports, though the overall expansions remained well above the long-run averages thanks principally to the easing of pandemic restrictions. March saw virus containment measures ease across the eurozone to the lowest since the pandemic began. 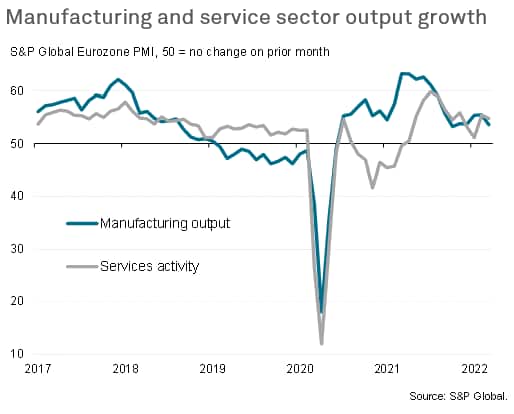 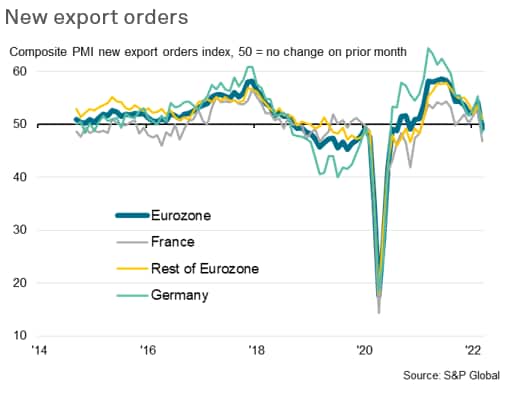 A major impact of the war was evident on prices, with the invasion of Ukraine widely linked to a further rise in companies' costs, exacerbating existing supply and demand imbalances and causing a surge in energy prices. Average input prices across both manufacturing and services rose at a rate far in excess of any previous increase recorded since comparable data were first available in 1998. The eurozone PMI input cost index reading of 81.6 compared to 74.8 in February and a prior peak of 76.0 seen back in November. A record increase for service sector input costs was accompanied by the steepest rise in manufacturing input costs since the near-record increases seen late last year.

The record increase in raw material and energy input costs, combined with further upward pressure on wages, drove an unprecedented rise in average prices charged for goods and services in March, with rates of inflation reaching new highs in both manufacturing and services. 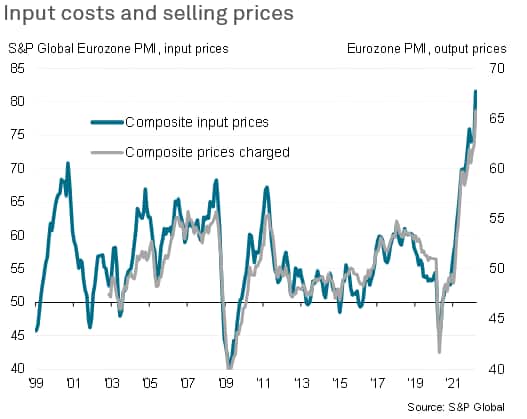 The Ukraine war and sanctions on Russia were also widely reported to have led to a worsening of supply chain delays, aggravating pandemic-related supply disruptions, including new delays from China amid fresh lockdowns. Having shown signs of moderating in February, average supplier delivery times lengthened in March to the greatest extent since last November. 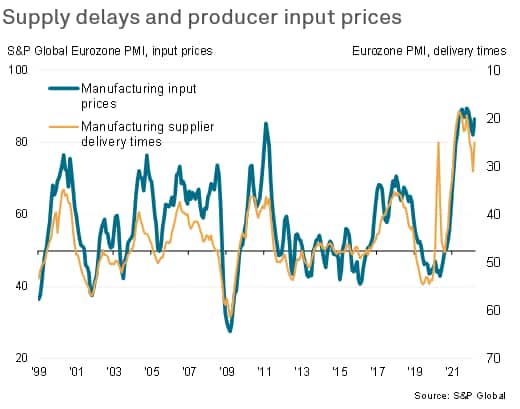 An additional impact of the invasion was evident on business sentiment, as tracked by the PMI's future output expectations index, which fell in March to its lowest since October 2020. Expectations of output in the coming year fell to the lowest since November 2020 in the service sector, and down to the lowest since May 2020 in manufacturing. Backlogs of work, another indicator of future business activity, meanwhile rose at the slowest rate for a year.

The survey data therefore underscore how the Russia-Ukraine war is having an immediate and material impact on the Eurozone economy, and highlights the risk of the eurozone falling into decline in the second quarter.

Had it not been for the easing of COVID-19 containment measures to the lowest since the start of the pandemic, business activity would have weakened far more sharply in March. This short-term boost from the rebound will likely fade in coming months. Meanwhile, the war has aggravated existing pandemic-related price pressures and supply chain constraints, leading to record inflation rates for firms' cost sand selling prices, which will inevitably feed through to higher consumer prices in the months ahead. 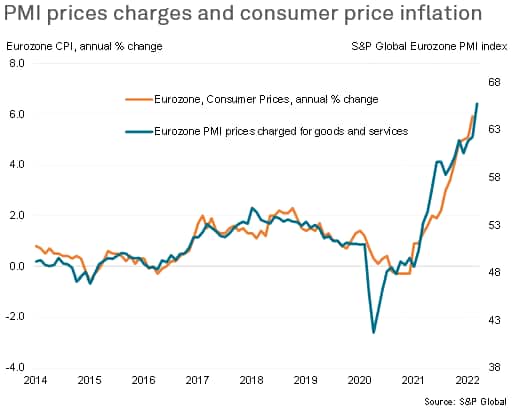 Businesses are themselves bracing for weaker economic growth, with expectations of future output collapsing in March as firms grow increasingly concerned about the Impact of the war on an economy that is still struggling to find its feet from the pandemic. 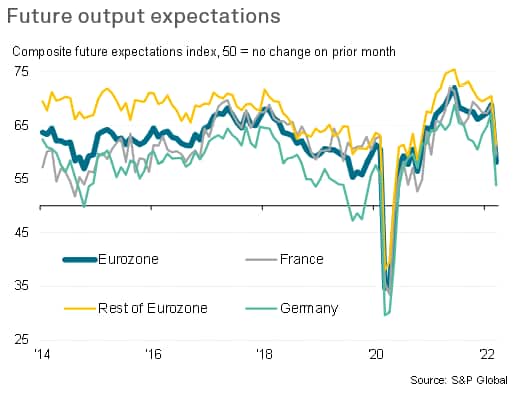 While the headline indicators on current output from the PMI survey may have beaten expectations, the detail reveals a significantly darker economic outlook compared to February, signalling slower growth and higher inflation in the months ahead.