The release of disappointing flash Eurozone PMI data on the same day that the European Central Bank's Governing Council acknowledged that downside risks now prevail has focused minds on the health of the euro area economy. The new debate centres on how entrenched the recent slowdown is, and in this respect the survey data suggest slim hopes of a swift rebound.

The flash IHS Markit Composite PMI for the euro area fell to 50.7 in January, its lowest since July 2013. At this level, historical comparisons indicate that GDP is growing at a quarterly rate of just 0.1%. Most disappointing was the PMI for France, which has succumbed to a four-year low and indicative of GDP contracting by 0.1%. While Germany fared better, the PMI is merely in line with a modest 0.2% growth. Worryingly, Germany's manufacturing sector slipped into decline for the first time since 2014, in turn reflecting the largest drop in exports for six years. The rest of the region is meanwhile collectively seeing the weakest rate of expansion for over five years.

The survey's output and price gauges have both now fallen into territory more associated with the ECB loosening than tightening policy (see charts). Based on historical comparisons, the output index needs to drop below 51 to be consistent with the Governing Council typically voting for more stimulus, while the price pressures gauge (a mix of input prices and suppliers' delivery times) needs to breach the 50 line. With these indicators at 50.7 and 54.2 respectively, the output index is already in stimulus territory. The price pressures index, down from 67.3 a year ago, appears to have considerable downward momentum, albeit not yet in the stimulus 'action' zone, just suggesting a bias toward stimulus. 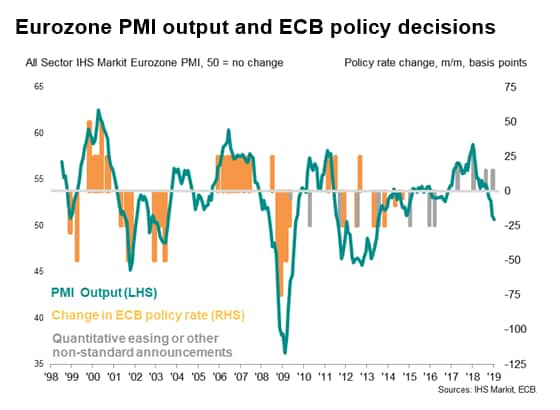 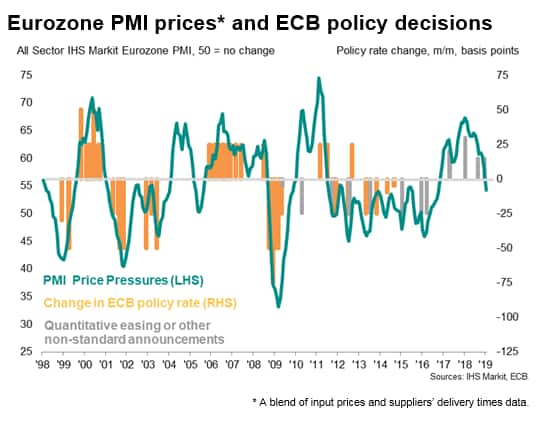 The ECB has responded to the recent flow of weak data. First, ECB head Mario Draghi acknowledged that the balance of risks to growth moved to the downside in a speech on 15th January. "It's a slowdown, which is not heading towards a recession, but it could be longer than expected". Second, at the 24th January Governing Council meeting, the ECB head warned that risks had "moved to the downside", shifting away from the previously held belief that risks were "broadly balanced". Policymakers were split, however, on the extent to which downward headwinds would persist in coming months. 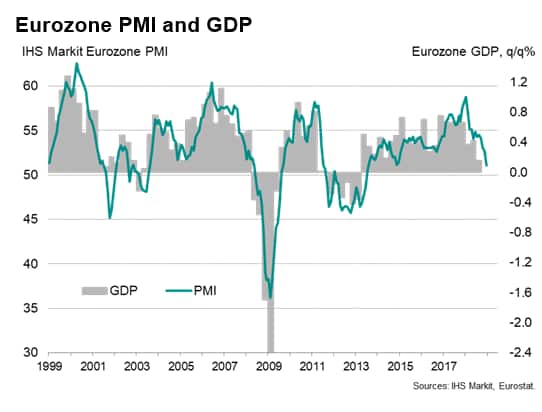 The detail from PMI surveys brings scant hope of any significant long-lasting turnaround. While at least some of the current weakness is due to short-term factors, notably the yellow vest protests; supply issues due to low water levels in the Rhine and new auto sector emissions regulations, though the anecdotal survey responses also indicate that a deeper malaise has set in at the start of the year. Companies are concerned about a wider economic slowdown gathering momentum, with rising political and economic uncertainty increasingly affecting risk appetite and demand.

Both the eurozone manufacturing and service sectors output indices are close to stagnation, highlighting the broad-based nature of the current slowdown. In fact, a comparison with official data suggests that manufacturing output is now in decline. 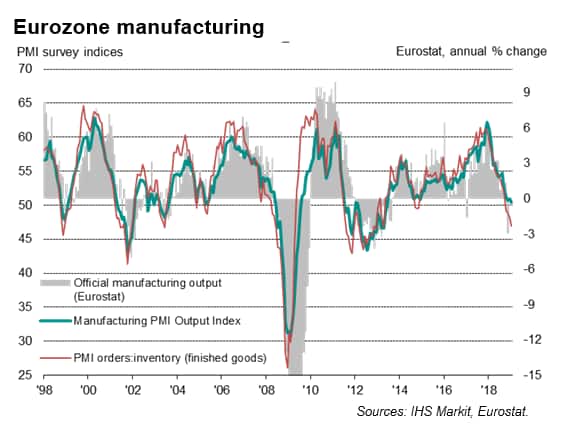 Looking back to the detailed EU sector PMI data from December, this broad-based weakness was highlighted by only three of the 25 industries covered by the PMI enjoying output growth above the 2018 average. Nine industries had in fact slipped into decline or stagnant by the end of the year whereas back in July, all 26 were expanding. 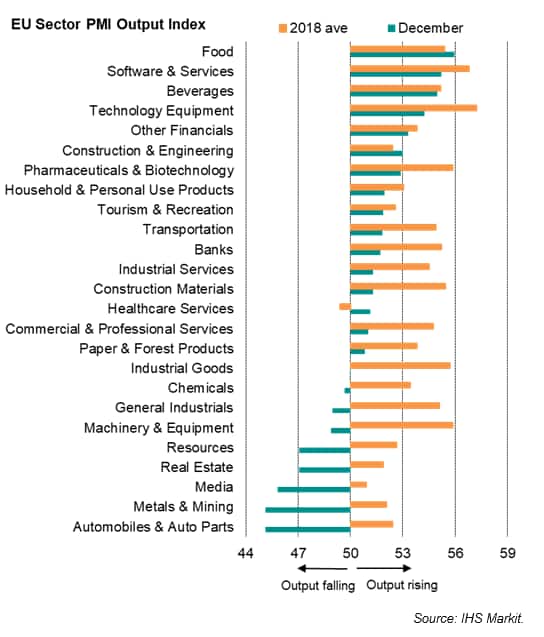 Forward-looking indicators are also flashing red. Inflows of new business fell in January for the first time since November 2014, dropping at the steepest rate since mid-2013. Future expectations are also near four-year lows, albeit picking up slightly on December. The subdued degree of business confidence pushed jobs growth to its lowest since September 2016.

Output is also growing faster than order books in both manufacturing and service sectors, suggesting companies will likely to focus on reducing capacity in coming months. Similarly, in manufacturing, the new orders-to-finished goods inventory ratio has fallen to its lowest since early-2013 as warehouses have begun to fill with unsold stock.

While some rebound from temporary factors may therefore be on the cards for coming months, the underlying health of business sentiment appears to have deteriorated, the weakness has become more broad-based and forward-looking indicators have turned negative, all of which suggests that any bounce may lack conviction.