February saw a welcome stabilisation of manufacturing production in mainland China, suggesting the health restrictions imposed to control the Omicron variant have caused far less economic disruptions to supply chains than prior COVID-19 waves. Price pressures also remained muted, providing leeway for policymakers to add more stimulus to address the overall weakness of the economy and a continued drop in employment.

Manufacturing production in China stabilised in February, according to PMI survey data produced for Caixin by IHS Markit, in a welcome sign of the economic impact of the Omicron wave ebbing. 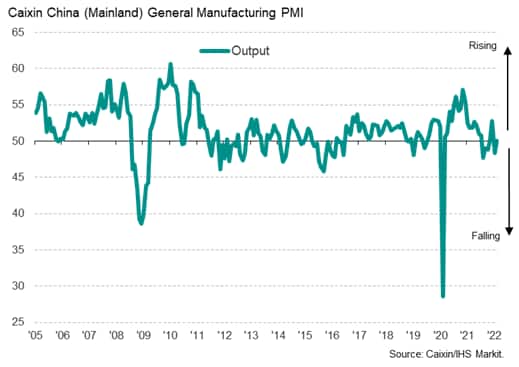 The survey data pointed to a marginal increase in production after output had fallen into decline at the start of the year due to health restrictions having been ramped up in prior months in the face of the Omicron and Delta waves. Having risen last November to the tightest since March 2020, China's pandemic-related restrictions were eased slightly in February, helping prevent a further decline in factory output.

New orders rose, climbing at the fastest rate since last June, hinting at a more robust increase in production in March. However, new export orders continued to fall sharply, albeit less so than in January (which had seen the biggest drop in overseas demand for 20 months), suggesting the manufacturing sector remains heavily reliant on domestic demand as exports continue to act as a drag. 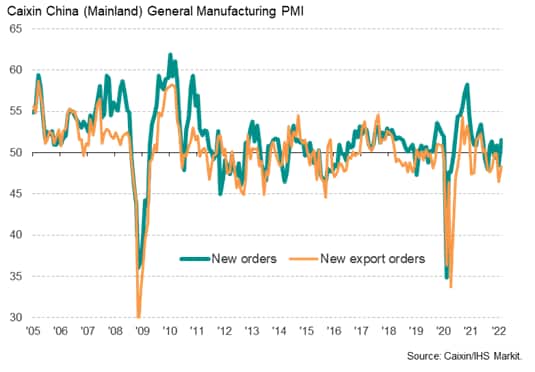 A further lengthening of supply chains was reported as a result of the ongoing pandemic, though the incidence of delays fell compared to January and delays remained far less prevalent than seen in the US, Japan and Europe in recent months. These fewer supply constraints, combined with government interventions in commodity markets, helped keep input price inflation lower than in the US and Europe, in turn feeding through to relatively muted selling price inflation. 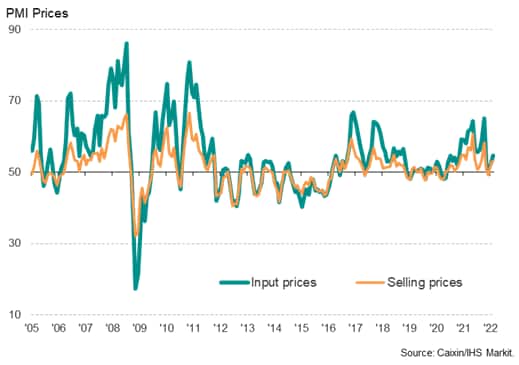 The renewed growth of new orders reported in February helped stabilise manufacturers' backlogs of orders - the amount of work in hand available to sustain production in coming months - which had fallen sharply in January. However, the modest rise in backlogs of work seen in February did little to deter companies from downsizing. Manufacturers reduced their workforce headcounts again at one of the sharpest rates seen during the pandemic, albeit slightly less so than in January (which had been the largest fall recorded since April 2020). The latest PMI survey data provide further reassuring news on inflation in China after consumer prices rose just 0.9% on an annual basis in January, down from 1.5% in December. However, the subdued output and export orders gauges support IHS Markit's recent lowering of China's real GDP growth forecast to 5.3% for 2022 and 5.2% for 2023, down respectively from 5.4% and 5.3% forecasts made in January.

Policy in China is meanwhile expected to be loosened further over the next few months to support economic growth and, perhaps more importantly, stem the decline in employment.

From a broader perspective, the steadying of production in China during February, and the avoidance of a drop in production due to the Omicron wave, will be welcome news for policymakers in other countries, boding well for global supply chains emanating out of mainland China. The prospect of further stimulus should likewise help allay worries of a further production or demand deterioration.