Global manufacturing output growth accelerated in March to one of the fastest rates seen over the past decade. The further improvement occurred despite near-record shortages of inputs, the lack of which was a principal factor behind the largest accumulation of backlogs of uncompleted orders since 2010.

These rising backlogs point to strong production growth through to the second quarter, assuming the supply situation improves. Delays from the Suez Canal blockage could add to these delays, however, resulting in a further short-term constraint on production.

More encouragingly, a brightening outlook has encouraged firms to boost capacity by adding to payroll numbers at the fastest rate for over two years.

The consequence of higher demand and constrained supply has been rising prices. March saw the largest increase in prices charged for manufactured goods recorded since data were first available over ten years ago. 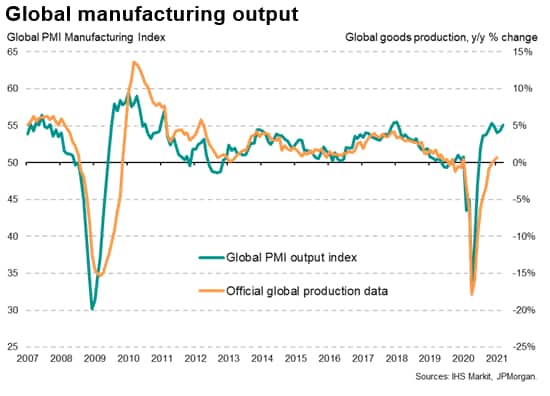 The JPMorgan Global Manufacturing PMI, compiled by IHS Markit from its proprietary business surveys, showed worldwide factory output growing for a ninth successive month in March. Moreover, the rate of growth accelerated to a pace just shy of last November's recent peak, hitting the second-highest since the start of 2018. The latest monthly expansion has only been exceeded three times since February 2011.

The upturn was led by a record surge in eurozone manufacturing production (fueled in turn by a record upswing in Germany), accompanied by strong growth in the US and a notable rebound from near-stalled production in the UK. In Asia, Japanese producers reported the sharpest gain for 27 months, while China's output growth slowed to the weakest since last April. Nonetheless, further robust upturns in Taiwan, South Korea, Indonesia and Vietnam all helped sustain output growth in the rest of Asia at one of the fastest rates seen over the past decade (data for India are released 5th April). 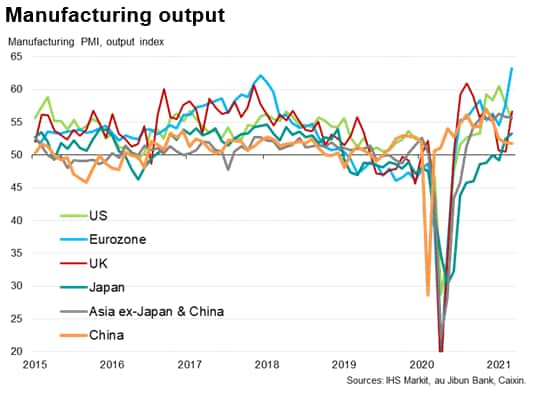 The manufacturing upswing in part reflected rising global trade flows. Global exports rose at a rate not seen since January 2018 (just prior to the dampening impact of US-China trade war developments).

The eurozone's impressive record expansion was in particular driven by surging exports, which in the PMI data it should be noted includes intra-eurozone exports among its members. Eurozone exporters reported the largest monthly increase in export orders since the survey data were first available in 1997.

US export growth moderated but remained among the sharpest since the global financial crisis, and China recorded the first rise in exports since December last year, though the latter reported only modest growth due to shipments again being constrained by logistics issues, notably shortages of containers.

Japan meanwhile recorded the first back-to-back monthly gains in exports for over two years, and elsewhere in Asia exports rose at the fastest rate since July 2014. 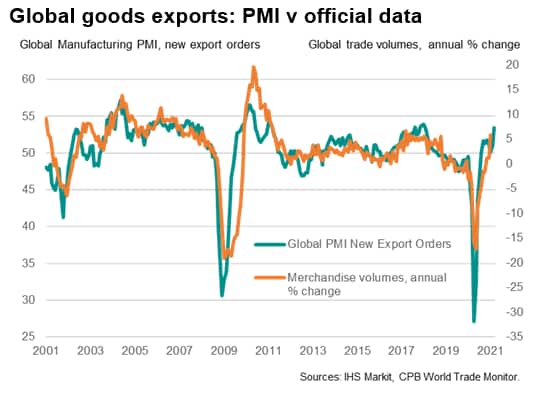 The rise in production during the month was all the more impressive given near-record supply chain delays in March. Average suppliers' delivery times lengthened to an extent only exceeded once in more than two decades of survey history, with only the supply shock during the height of the pandemic in April of last year witnessing more widespread delays.

Supply constraints were attributed to demand exceeding supply for a wide variety of inputs, with shipping and logistics issues contributing to longer lead times.

Supply delays were most pronounced in Europe, led by Germany, the Netherlands and Austria, as well as in the US and Taiwan, as demand for inputs soared across these economies alongside booming production demands. Brazil and the UK also saw above-average supply problems, albeit in the latter's case often linked to Brexit related non-tariff barriers. 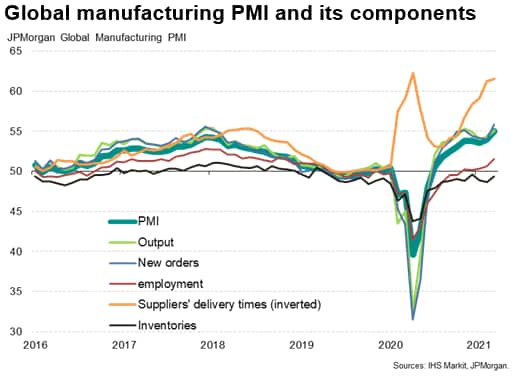 The constraints arising from supply shortages meant overall global production growth lagged behind that of new orders. Such a shortfall in production is unusual, especially to the degree seen in March. With the exception of the supply shock from China's factory shutdowns last year, a production shortfall relative to new orders growth of the magnitude seen in March has generally been followed by stronger production growth, therefore boding well for output to rise at a steeper rate in the second quarter. This was particularly evident in the US, where new orders growth accelerated while output growth has slowed markedly since the start of the year. 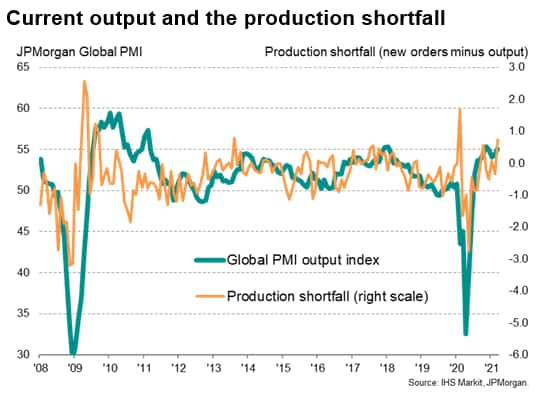 Similarly, such a pent-up demand fueled upturn in the second quarter was also signalled by the largest increase in backlogs of work recorded since May 2010. Business expectations also continued to run at one of the highest levels seen over the past seven years, albeit down slightly on February, amid hopes of the vaccine roll-out driving further sales growth in coming months.

In this context it was therefore not surprising to see the worldwide surveys indicate the fastest growth of manufacturing payrolls for 28 months. 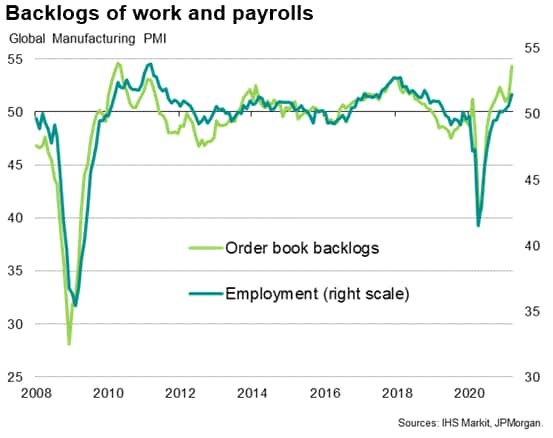 A consequence of the recent surge in demand and supply shortages was a further rise in price pressures during March. Average prices paid globally for inputs rose at a sharply increased rate, registering the second-largest monthly gain since September 2017 (behind December 2020).

With firms often seeking to pass these higher costs on to customers, average selling prices for goods leaving the factory gate were hiked to an extent not seen since comparable data were first available in 2009. 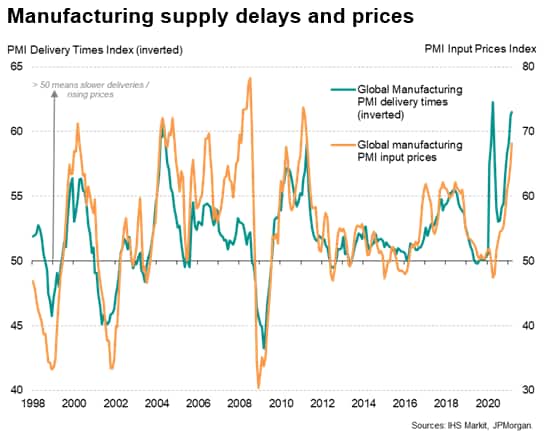 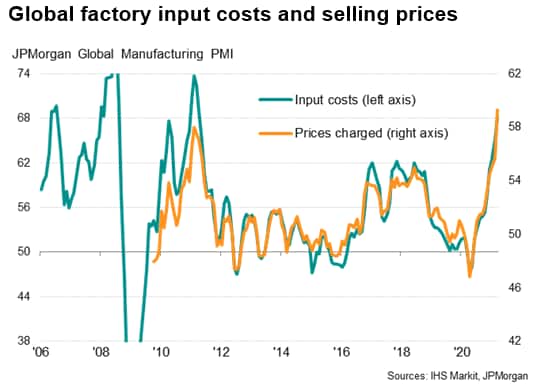 📆 FOMC, ECB, BoE meetings, and December flash #PMIs in focus this week ahead. Preview the week with us:… https://t.co/8aC06UqjH5