The Australian private sector economy fell back into decline during August, according to latest flash PMI data, with business activity contracting following two months of solid growth. The downturn in overall activity coincided with renewed coronavirus-related restrictions in parts of the country that disrupted business operations and weighed on demand, particularly in the service sector.

The survey also indicated a rise in spare capacity as sales and production requirements dropped, dampening the job market further. All these trends hint at a challenging recovery ahead, especially if social distancing measures are extended or imposed in more parts of Australia. Prices meanwhile indicated rising inflationary pressures, in part fuelled by supply chain disruptions due to the new restrictions.

The Commonwealth Bank Australia Flash PMI, compiled by IHS Markit and covering both the manufacturing and service sectors, fell nine points from 57.8 in July to 48.8 in August. By registering below the no-change 50.0 level, the latest reading indicated a modest decline in private sector output. This reduction followed two months of solid growth.

The return of lockdown measures in Victoria following a surge in new infection cases coincided with business activity falling back into decline. The state of Victoria holds the second-largest share of the Australian economy, accounting for nearly a quarter of GDP.

Renewed restrictions to control the spread of the coronavirus dealt an immediate blow to the service sector, while manufacturing was noticeably less affected. The survey showed a divergence in economic trends between the two monitored sectors, with services activity and sales falling after two months of expansion. By contrast, manufacturing output and sales continued to rise, albeit at slower rates.

External demand continued to weaken amid ongoing border restrictions and subdued global demand. New export orders fell further in August, with the rate of decline the quickest since the height of the COVID-19 downturn in April and May. Reduced foreign demand was seen across both sectors.

Job shedding persisted in the middle of the third quarter as lower sales contributed to a build-up of spare capacity. Employment shrank for the seventh month running during August, with the rate of contraction the sharpest for three months. Business closures, redundancies and the non-replacement of leavers were highlighted by respondents as reasons for the fall in employment. In addition, some firms mentioned that renewed curbs on business operations in Victoria had also led to job cuts. Official data showed the unemployment rate rising to 7.5% in July, the highest in 22 years. 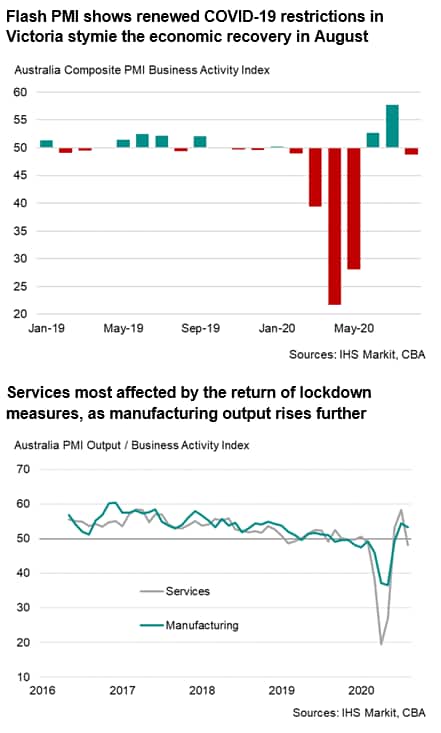 Australian goods producers were in better shape than their service sector counterparts during August, with production continuing to rise. However, the survey brought signs that sustaining the recovery in the months ahead could be challenging. Inflows of new orders rose at a noticeably slower pace at manufacturers, and one that was insufficient to maintain a further rise in the level of work-in-hand (but not yet completed). After rising in July, backlogs of work fell solidly in August, hinting that production volumes in the coming months may slow or even decline in the absence of a robust pick-up in demand.

The lockdown in Victoria also had an impact on supply chains. Delivery times lengthened further in August, with the rate of increase severe and surpassed only by the record rates seen in April and May. Greater demand for inputs, freight limitations and border restrictions (or closures in some cases) disrupted the ability of suppliers to meet their obligations, according to anecdotal evidence.

Input costs rose across both monitored sectors, with manufacturing firms reporting a sharper increase. Higher freight costs, greater prices for fuel and materials such as copper, as well as supplier price hikes were factors driving inflation. In order to help cover some of their costs, firms raised their selling prices, albeit only marginally. Some companies actually reduced prices amid rising competition. 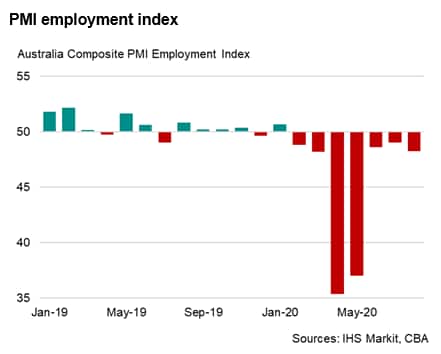 The economic recovery will be determined by infection numbers and associated containment measures. Despite the renewed drop in private sector output, companies remained positive about future output, with confidence stemming from expectations of a further recovery from the COVID-19 downturn. However, there remained concerns around the longer-term impact of the pandemic on economic activity as well as supply chain disruptions and the reduction in government funding support.

The ongoing decline in employment also remains a major concern. With firms still struggling to boost sales and control costs, the rise in spare capacity will lead them to reduce staff numbers further. While the extension of the government's job retention programme (JobKeeper) to March next year could help slow the rate of job losses, any extended (or broadening) virus related restrictions in the economy, alongside border controls, will dampen the job market further and weigh heavily on consumption, thereby undermining the recovery.