The Capesize average earning (C5TC) fell significantly to USD15,715/day on 2nd November, down almost 55% from USD34,896/day almost a month ago. Also, Panamax average earning (P5TC) declined to USD11,473/day from USD12,549/day over the same period, according to the Baltic Exchange. 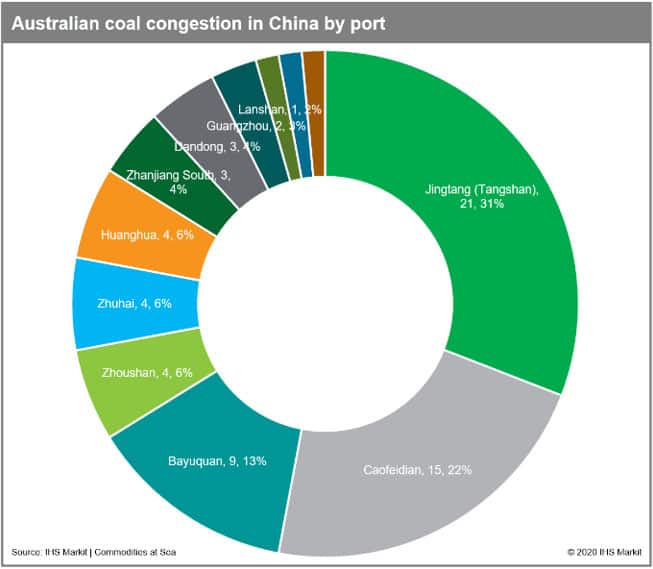 There are several factors for this dramatic fall in dry bulk freight rates, including large ballasters moving towards the Atlantic basin and a lack of prompt chartering demand out of the US Gulf. In our view, the negative sentiments played major roles with the news that China has verbally restricted state-owned steelmakers from importing Australian coal.

As of 2nd November, around 8.7 million tonnes (dwt) of Australian coal is sitting off the coast of China, including 6.3 million tonnes (72%) of metallurgical coal and 2.4 million tons (28%) of thermal coal. Since China imports mostly coking coal from Australia, much of the congestion with high demurrage payment is happening at northern ports nearby major steel mills, including 21 vessels at Tangshan and 16 vessels at Caofeidian. The IHS Markit Coal, Metals, and Mining team understands that it is unlikely controls will be eased up for the remainder of the year although earlier in October some additional quotas were provided to end users in the north of the country to secure winter fuel supplies. Therefore, China will try to replace Australian coking coal demand with Mongolian coal in the short-term. Consequently, total seaborne demand will reduce despite a recent recovery of coal imports from Indonesia in the fourth quarter. However, the winter season would reduce Mongolian inland-supply, mostly carried by truck and increase seaborne demand with a possible new quota in Q1 2021.

IHS Markit forecast total Chinese coal imports in 2020 will be 5-10 million tons lower than 2019 because of strict coal import control and delays in custom clearance; 2021 import volume will be similar to the 2020 level, assuming that the annual import quota will remain unchanged at around 300 million tons next year.