In the Reserve Bank of Australia's February meeting, governor Philip Lowe struck more dovish tone, suggested the likelihood of the next policy move being easing or tightening had become "evenly balanced". The change in policy stance is seen as opening the door for a potential rate cut later in the year if the economic situation deteriorates. 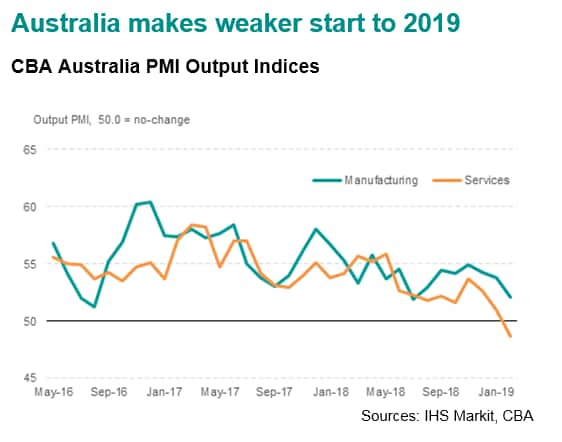 The February PMI surveys for manufacturing and services indicated a downturn in Australia's private sector, with the latter observing an outright decline in output for the first time since data collection started in May 2016. Growth was sustained in the goods-producing economy, but eased for a third successive month to the weakest since last July. Unless March can present a marked turnaround in momentum in Australia, the first quarter average is set to signal near-stagnation of business activity.

There are some transitory factors at play here, such as drought- and flood-related impacts, but demand pressures have also been weakening. Australia is no exception to the global manufacturing and trade slowdown which has resonated through the Asia-Pacific region, causing Australia's export growth to ease. Anecdotal evidence from survey participants also suggests that recent regulatory changes in the financial sector from the Banking Royal Commission have weighed on demand for services. 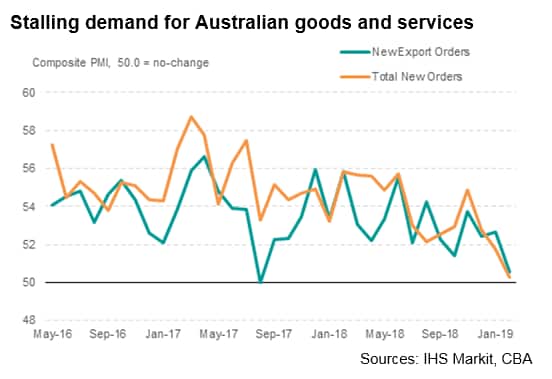 Since 2014, regulators have been clamping down on risky credit practises by imposing restrictions on commercial bank lending activity through a combination of tightening up of serviceability criteria, higher lending standards and by introducing an investor lending growth benchmark. The restrictions reflect growing concerns about elevated levels of household debt and its impact on repayment ability.

On the one hand, IHS Markit assesses that the new banking sector regulations are positive for the financial sector. It is likely that regulators will also seek further macroprudential regulations in the banking sector, which could include lowering the maximum loan-to-value ratio on household mortgages. If implemented, banks will have to uphold tighter lending conditions and target higher-quality borrowers, which would limit further credit-risk accumulation in bank's household loan portfolios. Credit growth in this segment has already slowed, to 4% year-on-year in the fourth quarter of 2018 versus 8% in the fourth quarter of 2016. 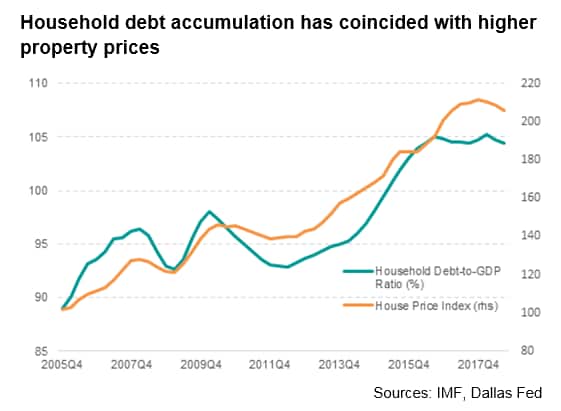 On the other hand, this tightening of lending standards, in tandem with any new regulations that may be introduced in the near term, are likely to adversely impact property values. IHS Markit expects to see a modest increase in non-performing loans as a result.

Furthermore, the accumulation of household debt has coincided with rising house prices, a positive wealth effect which has encouraged more borrowing (and thus more spending). Falling property prices therefore risk denting household sentiment, and could act as a drag on demand.

Nevertheless, the labour market is in robust shape. Unemployment has been steadily falling since 2014 and the latest PMI data continued to signal broad-based hiring across both manufacturing and service sectors despite the drop in activity. Further jobs growth should help to lift nominal wages, with a boost in real-terms coming from continued stable inflation. 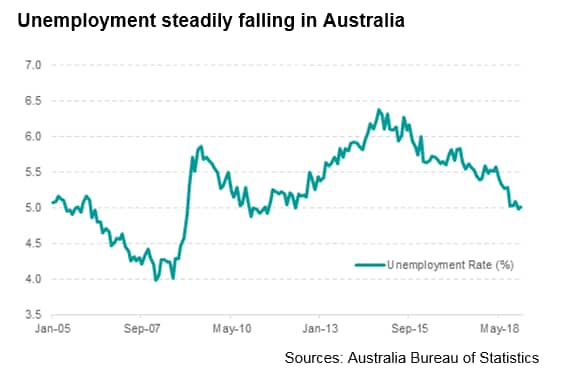 Overall, latest PMI data highlight the negative impact of slowing domestic and external demand on Australia's current growth path. While transitory weather-related disruptions could have overstated the drag, the downward trajectory exhibited in recent months reinforces the RBA's shift to a more neutral policy stance. Latest survey data also indicated the drag that the Royal Commission has initially had on service sector business. IHS Markit's assessment of the regulatory changes is that, although these should help curb credit risk accumulation and support financial stability, they are likely to adversely affect house prices.