A strong headline PMI reading masked just how tough business conditions are for manufacturers at the moment. Although demand remains strong, as witnessed by a further solid improvement in new order inflows, supply chains continue to deteriorate at a worrying rate. Shortages of inputs have restricted production growth so far in the fourth quarter to the weakest seen over the past year and a half.

At first glance, manufacturers in the eurozone had a bumper month in November. The IHS Markit Eurozone Manufacturing PMI increased from 58.3 in October to 58.4, marking the first rise in the headline index since June. The latest reading was not only far above the 50.0 no change level, but also almost seven points higher than the survey's per-pandemic long-run average of 51.7

However, the details behind the headline PMI tell a far more worrying picture.

A record rise in inventories meanwhile reflected increased efforts by manufacturers to build safety stocks, in turn driven by fears of ongoing shortages of inputs in coming months.

The interplay of these PMI survey measures of output, new orders, suppliers' delivery times and inventories are illustrated in chart 1 below. Note that all of these variables, plus employment, are components used in the calculation of the headline PMI. 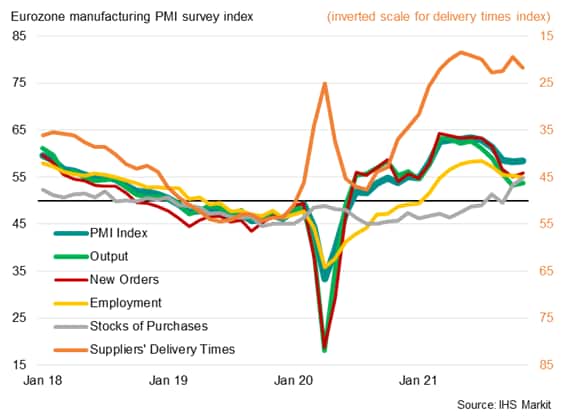 The lengthening of supplier lead-times - normally considered a positive development associated with improving demand in the manufacturing economy (but at present reflecting the pandemic supply shock) - can clearly be seen to have boosted the headline PMI well above the output index, the latter trailing new orders growth in recent months.

As chart 2 showed more clearly, this 'overstatement' of manufacturing production growth by the headline PMI relative to the survey's actual output index since the summer months is evident not just for the eurozone, but is especially visible for France and Germany.

In France, for example, production stalled in November having fallen in October, contrasting with headline PMI readings well above the 50.0 no-change level.

In Germany, production growth likewise has more or less stalled so far in the fourth quarter, contrasting with the stronger (albeit moderating) headline PMI.

Read more about how to interpret the headline PMI and its component sub-indices.

It is the constriction of output relative to new orders which also helps to explain why price pressures are currently so strong. With demand once again outstripping supply, the November PMI survey saw a continuing sellers' market, pushing prices charged for manufactured goods higher and at a rate surpassing anything previously recorded in almost two decades. Higher factory gate prices also suggest consumer inflation has further to rise.

As long as output continues to lag new orders, prices will have a tendency to rise. Only by watching the PMI sub-indices will these inflationary signals be observed.