April saw the National Assembly in Vietnam agree a new five-year socio-economic development plan covering the years 2016-2020. As part of this plan a number of economic targets have been set. This note looks at the targets and attempts to judge how likely the country is to achieve them. But first, we take a look at the latest PMI data on the performance of the manufacturing sector to gauge the current economic situation.

Latest Nikkei PMI data, produced by Markit, signalled accelerated growth of manufacturing output and new orders in April, with each rising at the fastest rate in nine months. It therefore appears that the soft patch in the sector around the turn of 2016 has come to an end. Higher workloads encouraged firms to increase employment following a decrease in March. Firms also raised their purchasing activity at a sharper pace. 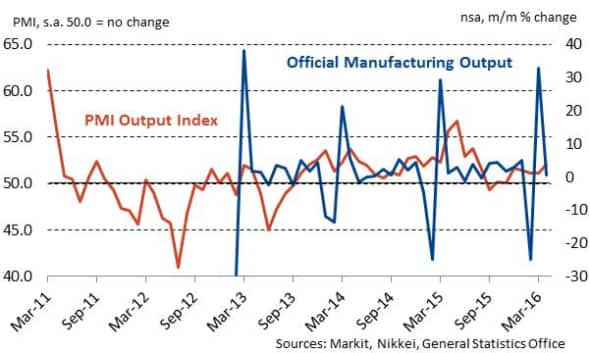 Another index from the PMI survey which saw its pace of change quicken was input prices. Costs rose for the second month running in April, and to the greatest extent for 20 months. Respondents mentioned higher prices for raw materials including steel. Higher costs were often passed on to customers, meaning output prices rose for the first time since September 2014. If these trends continue, we could be seeing an end to the recent lack of inflation in the Vietnamese manufacturing sector and wider economy. The annual rate of change in the consumer price index (CPI) has only recently broken the 1% mark having been subdued for much of the past year-and-a-half. 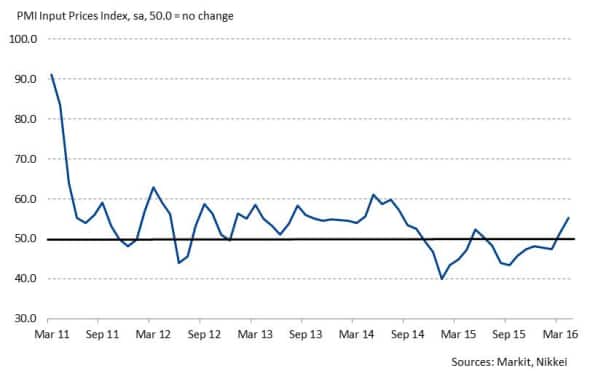 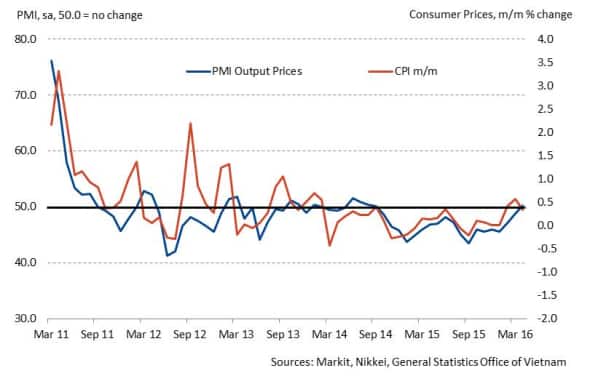 Nine economic indicators have been assigned targets for 2020 by the National Assembly, covering topics from GDP growth to urbanisation (table of details available in Appendix 1). We will discuss them below and set out how likely they are to be achieved.

This would represent an acceleration of growth from the previous five-year period (5.9% average), but given that the global economic environment was challenging in 2012 and 2013 such stronger growth could be achievable if supported by an improved global environment, as was the case in 2015 when a 6.7% expansion was recorded. This positive outlook is of course reliant on global conditions remaining stable or improving, any global downturn over the next five years would clearly knock the target off course. Another reason for optimism is that the Trans-Pacific Partnership (TPP) trade agreement should be brought into force within the five-year period, and is expected to be a real benefit for the Vietnamese economy.

The chances of meeting this target are a little more challenging than the first. GDP per capita in Vietnam in 2015 was $2,109, with an average growth rate over the past five years of 9.7%. If this growth rate were repeated over the next five years it would take GDP capita to $3,350 in 2020, within the target range. However, growth has slowed considerably in recent years (to 2.8% in 2015) and the fact that the target is set in US dollars makes it vulnerable to a strengthening dollar. The Vietnamese dong fell 5.1% against the dollar during 2015, thereby hitting the rate of growth in GDP per capita in dollar terms (an example of this effect is shown in Appendix 2).

This target looks some way off at present, with the combined sectors accounting for 68% of GDP in 2015 (28% Industry, 40% Services). Furthermore, the trend does not show a rapid increase in the share of the economy accounted for by these sectors.

Contribution of Industry and Services to GDP 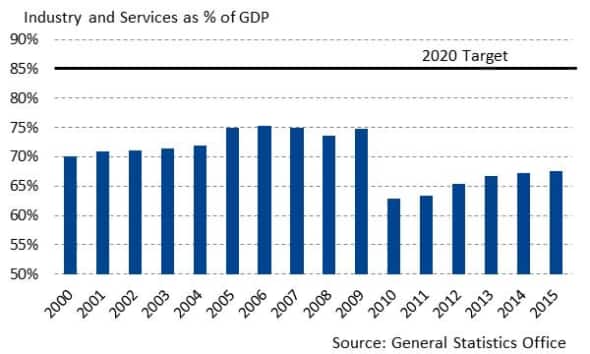 This target should be achievable given that it was met in 2015 (32.6%) and the average over the past five years is also within the target range. There is also the opportunity for the state to directly influence the figure given that around one-third of social investment capital emanates from sources related to the public sector (see Appendix 3).

Success in achieving this target will depend to some extent on global economic conditions and the effect they have on the Vietnamese economy. Should conditions be relatively benign the target looks reachable. The target has only been breached four times in the past 15 years, but these include 2013 and 2014 (the latest available data) and so some improvement will be needed to reduce the deficit by the end of the decade. 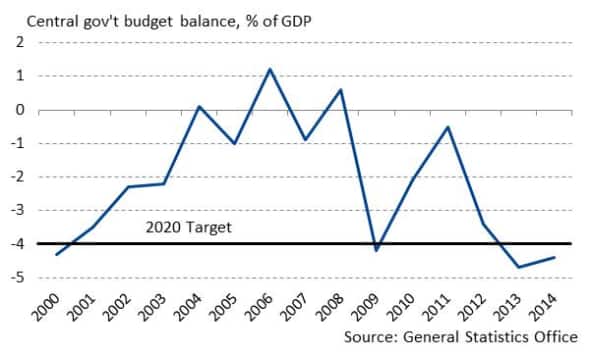 While the data on energy usage can be volatile, the recent trend is in favour of the target being met. In the three years to 2013 (the latest year for which data are available) consumption fell at a faster pace than required by the target. However, before that usage was rising, thereby adding an element of doubt to the optimistic prediction.

Based on recent trends this target looks like it will be tricky to meet. Currently, the urban population makes up 33% of the total (2014 data), and if the proportion continues to rise at current rates it will only be at 37.3% by 2020, short of the lower band required by the target.

Targets 8 and 9: Total Factor Productivity contributing 30% to 35% of growth, with labour productivity increasing 5% per year on average

Limited data availability regarding these targets makes them difficult to evaluate. Labour productivity grew above target (6.4%) in 2015, but below (4.3%) in 2014.

Overall, most of the named targets look to be achievable, particularly if global economic conditions are stable and the TPP comes into effect as planned. The biggest challenges look to be around the proportion of GDP accounted for by industry and services and the rate of urbanisation. Meanwhile, PMI data will provide a useful monthly signal as to how the economy is faring over the five-year period.