ETF investors return after fleeing ahead of Brexit

Prior to the UK referendum, ETF investors were withdrawing funds exposed to Europe with net consecutive outflows totalling almost $5bn. However since Brexit, German exposed funds' strong daily inflows have led a reversal.

The return to Europe

ETF investors have been returning to European exposed ETFs amid the turmoil brought about by the Brexit vote. These inflows seem to have begun to turn the tide after sixteen weeks of consecutive outflows were recorded from funds exposed to European equities. 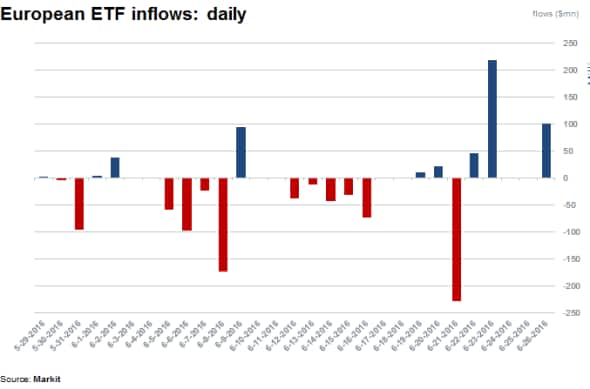 While not material relative to the more than $130bn in AUM across the largest 50 largest products, since June 23rd 2016 strong daily inflows totalling $365m have resulted in the first positive weekly inflows recorded since the middle of February 2016. 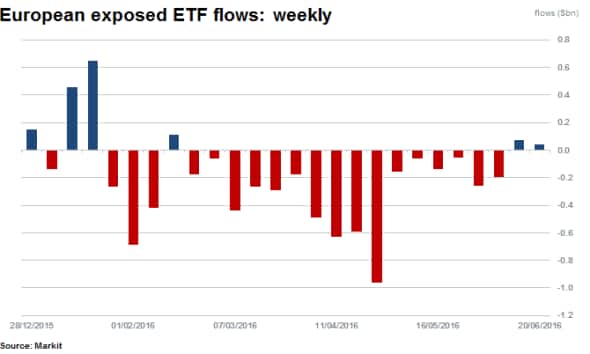 The largest weekly inflow into European equity exposed ETFs of $284m has been captured by the iShares MSCI EMU ETF which has just under $10bn in AUM (down over a third since the start of the year). The US listed ETF tracks large and mid-sized companies in Europe that use the euro as their official currency. Six out of the top holdings of the ETF are German, followed by two French firms. The ETF seeing the second highest inflow in the past week, totalling $153m, is the iShares MSCI Germany ETF. 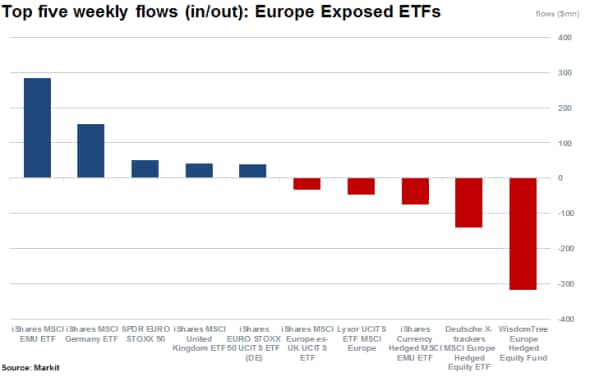 In terms of outflows, the strongest this past week has been seen out of the Wisdom Tree Europe Hedged Equity Fund, totalling $317m. The fund provides US or dollar based investors with hedged euro exposure to European equities, and has seen consecutive weekly outflows continue through 2016.

Total consecutive weekly outflows for the ETF since December 2015 have crossed $7bn, with AUM of the ETF falling by half over the same time to $10.5bn under management currently. The ETF is one of largest managed by issuer Wisdom Tree, which has seen its total ETF AUM decline by $9.8bn in 2016, with the total at $37bn currently. 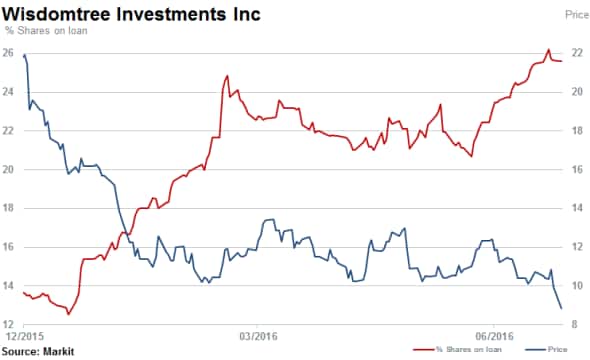 This decline in AUM and accordingly ETF earnings base has attracted short sellers. Shares in the asset manager have tumbled more by than half in the past six months. Short interest in the company is currently hovering near all-time highs with more than a quarter of shares outstanding on loan.

According to S&P Global Market Intelligence, while freight rates are expected to return to the pre-pandemic level i… https://t.co/qggHLGm3vb

Did you know this year's #WorldCup is using a new 'connected' ball? Or that there are dozens of cameras tracking pl… https://t.co/HY4X3nXz1Z