The US economy is showing further robust economic growth in the fourth quarter, with the pace of expansion picking up in November.

The faster pace of growth and healthy hiring trend were accompanied by the sharpest rise in average selling prices seen for four months, providing a triple-boost to the chances of the Fed hiking interest rates at its next meeting.

However, further price rises are by no means assured, as raw material and fuel costs fell, and the weak global environment combined with the strong dollar led to a further export-led weakening of manufacturing growth.

The lack of inflationary pressures and weak exports add to the sense that the interest rate trajectory remains shallow.

Here are five key messages from the November US PMI surveys: 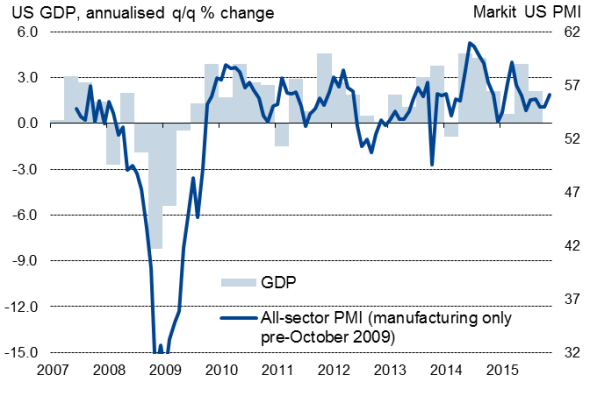 The Markit Flash U.S. Composite PMI Output Index registered 56.1 in November, up from 55.0 in the previous month and the highest reading since April.

The upturn in the November brings the composite index up to a level indicative of 2.3% annualised GDP growth in November, up from 1.8% in October.

The surveys therefore suggest the economy is on course to grow by just over 2% again in the fourth quarter, providing additional reassurance on the strength of the economy after yesterday's upward GDP revision.

Note that the recent revision to annualised GDP growth from 1.5% to 2.1% has brought the official third quarter growth rate into line with that signalled by the Markit PMI. This revision strengthens the correlation between the PMI and GDP to 83% (though a higher correlation of 86% is observed if residual seasonality is removed form the official data). 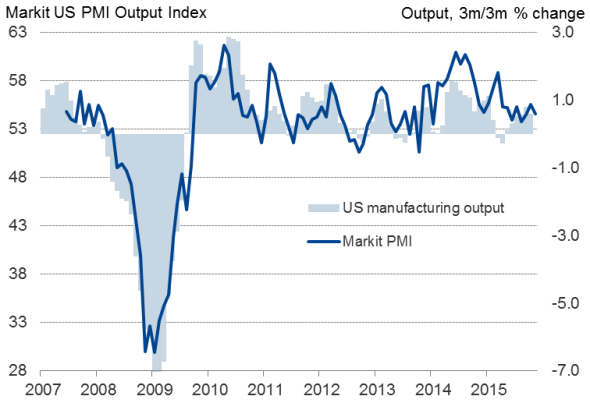 The Markit PMI's Manufacturing Output Index has a 92% correlation with the three-month trend in official factory production, and points to growth of at least 2.0% (annualised) in the fourth quarter so far. However, it's clear that factory activity growth has slowed since earlier in the year, linked in part to a struggling export sector. The latest survey showed manufacturing output growing at a slower rate in November and exports falling slightly, though domestic demand remained robust.

The slowdown in manufacturing growth in November was more than offset by an upturn in the service sector, where activity rose at the fastest rate since April. The PMI's correlation with official service sector growth is weaker than that for manufacturing (54%), but this can be explained by differences in coverage (the PMI only covers the private sector, and excludes retail, for example). Despite this, the survey gives a good advance indication of growth rates and turning points. November's survey results also showed business confidence and inflows of new business picking up again in the service sector. 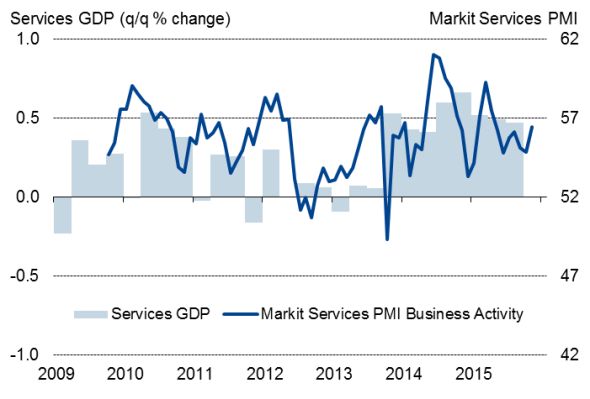 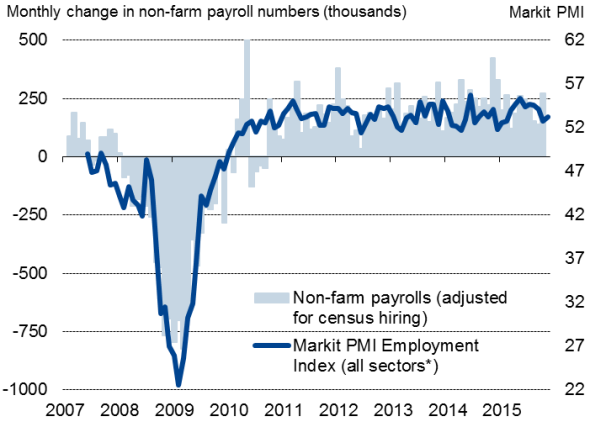 Hiring remained healthy in November, according to the weighted average of the two PMI surveys' Employment Indices. This composite index has a 95% correlation with official non-farm payrolls and signals a 178,000 increase in November. The hiring trend has nonetheless weakened compared to that seen earlier in the year. The survey signalled an average non-farm payroll rise of 205,000 in the first ten months of the year (almost identical to the 206,000 seen in the official data, albeit with variation seen from month-to-month). 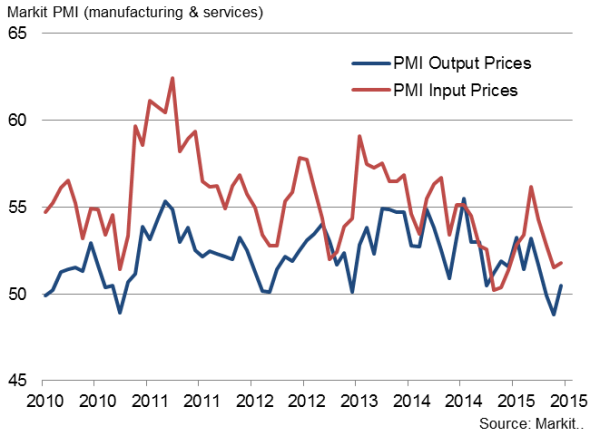 Average prices charged for goods and services rose at the fastest rate for four months during November, albeit still only modestly. The upturn in price pressures marks a turnaround from the fall in prices seen in September, but further weakness in coming months cannot be ruled out. The manufacturing sector saw input costs - a useful indicator of underlying inflationary pressures - fall for a third month running, linked in many cases to the renewed drop in oil prices. 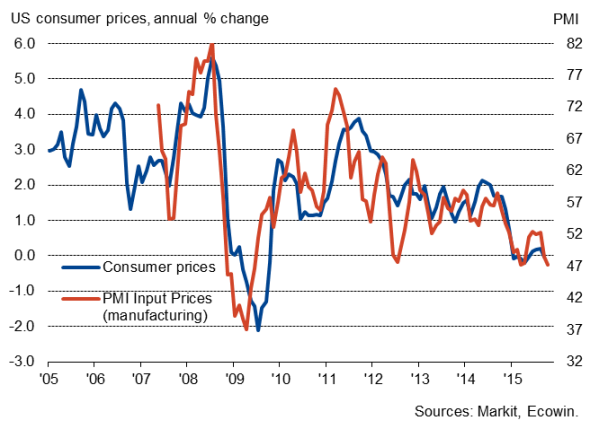