Global volatility has caught up with the Japanese credit market as credit risk priced into the country's corporate bonds now stands at a three year high.

Last week saw the credit market shun risk across the board, which saw CDS spreads surge across all three major credit regions. The global risk re-pricing means that European, North American and Japanese CDS spreads are now trading at multi year highs, with most of the widening having taken place since the start of the year. The latter of the three regions had previously proved to be recently immune to the worst of the global rise in credit risk, a trend that looks to have ended last week when the Markit iTraxx Japan saw its spread jump by 15%, twice the jump seen in the corresponding European or North American indices over the same period of time. Japan's surging credit risk continued in earnest on Monday, defying a wider global risk rally which saw credit spreads tighten from last week's highs. The iTraxx Japan traded 1% higher on the news that the country's GDP shrank by a worse than expected 1.4% annualised. These numbers further undermined faith in policymakers' ability to address the worst of the country's economic woes given that the Japanese economy only grew by 0.4% in 2015. While the current iTraxx Japan spread is still lower than at the start of "Abenomics," the fact that the index has more than doubled since the post crisis lows indicates that the market is growing increasingly impatient with the country's anaemic growth and is in turn demanding more compensation in order to insure the country's corporate bonds against default.

Banks saw the worst of the widening as Nomura, Mizuho and Bank of Tokyo-Mitsubishi all saw their 5 year spreads jump by more than 46% last week, mirroring a trend seen by fellow banks across the world. 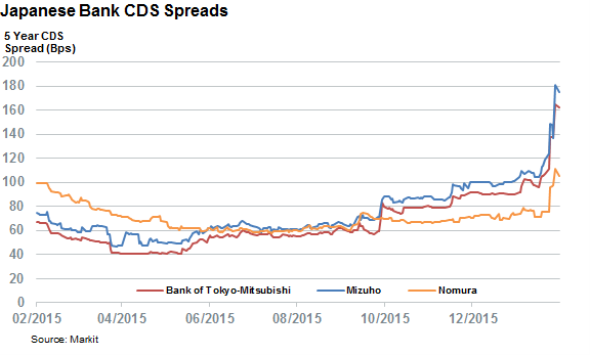 While the banking CDS spreads did revert somewhat on Monday, the current level of credit risk is still the highest it's been since the new CDS conventions were enacted in 2014.

The firms on the higher end of the credit risk scale also saw a further deterioration in credit risk as Softbank and Toshiba both registered all-time new highs in spreads. The second of the two now sees itself at the top of the country's CDS leader board with a spread of 643bps, over 15 times that demanded by the market only one year ago. 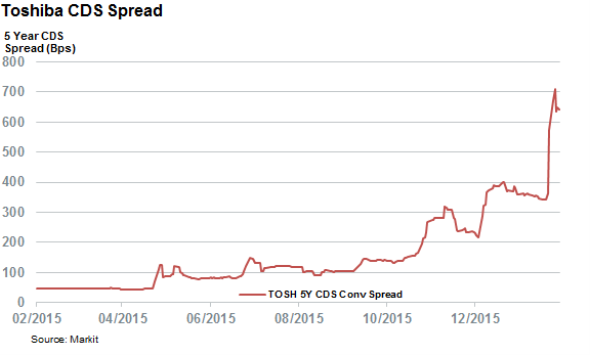