The Vietnamese economy is one of the fastest growing in the world at present. Strong economic growth in 2017 was driven by a humming manufacturing sector, backing up the findings of the Nikkei PMI, which last year posted its highest annual average since the survey began in 2011.

Official data from the General Statistics Office (GSO) of Vietnam signalled a 6.8% increase in GDP during 2017. This was just above the government’s target of 6.7% and means Vietnam will have been one of the fastest growing economies in the world in 2017.

Central to the impressive growth of the economy in 2017 was a sharp increase in manufacturing output. Manufacturing production rose 14.4% over the year. 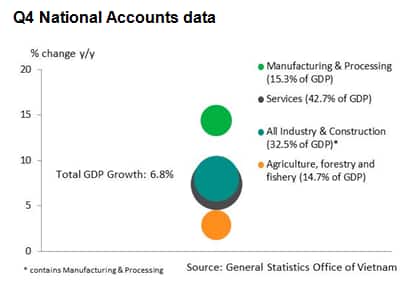 The positive performance of the manufacturing sector backs up the findings of the Nikkei Vietnam Manufacturing PMI survey, compiled by IHS Markit. This showed business conditions improving on a monthly basis throughout 2017, with the average reading for the year the highest in the survey’s history. 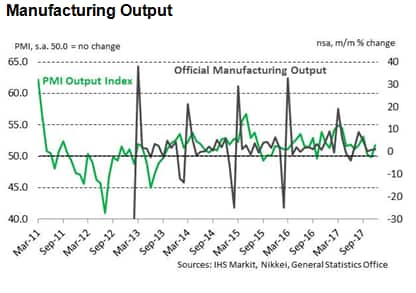 Manufacturing growth was boosted by firms’ ability to secure new export orders. PMI data pointed to marked increases in new business from abroad through much of 2017, with a record expansion seen in April. Meanwhile, official data pointed to a 21% increase in exports during 2017.

The strong export performance was likely a reflection of improving conditions in the global economy, which put in its best annual performance since 2014.

Rising exports are welcome considering the disappointing news at the start of the year, when the US pulled out of the Trans-Pacific Partnership (TPP) trade deal. The US has traditionally been Vietnam’s largest export market, ahead of the EU and China.

Vietnamese manufacturers have seen success in exporting a variety of products, though it is encouraging to see particular success in higher-value goods. Of note, the fastest growth among the key export items was seen in electronics & computers, up some 37% in 2017. These items now account for 12% of Vietnamese exports, second only to textiles. The second-fastest growing key export sector was machinery tools, an indication of Vietnam benefitting from the recent global upturn in capital expenditure and, again, a higher-value product than goods such as textiles. 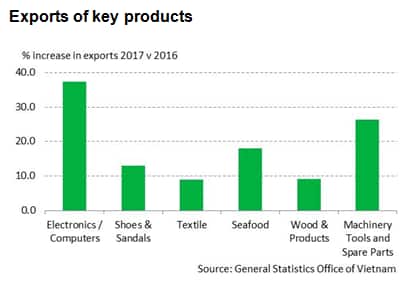 The Vietnamese economy enters 2018 on a strong footing. The next PMI release (on February 1st) will give an indication of how the manufacturing sector has performed in January.