Survey data for May show Japan's private sector economy enjoying the strongest expansion in over three years, fuelling expectations that economic growth will gain momentum in the second quarter.

The Nikkei Japan Composite PMI Output Index rose from 52.6 in April to 53.4 in May, marking the eighth successive month of expansion and the best performance since January 2014. Notably, the latest reading pushed the second quarter average to 53.0, up from the first quarter's mean of 52.5, and remained consistent with robust GDP growth.

Solid expansions in new work and employment were reported as firms became increasingly optimistic towards economic prospects. The PMI survey showed business confidence about the year ahead to have struck a four-year high in May, buoyed in part by Olympics-related preparations.

The upturn was again led by stronger manufacturing activity, but has become more broad-based as the service sector played an increasingly important role. The broadening-out of growth points to a more sustainable and firmer growth footing for the economy.

The service sector has expanded in tandem with manufacturing, suggesting that the recent run of strong factory activity has partially spurred greater business volumes for services providers. Higher volumes of new work in turn saw the service sector reporting the highest rate of increase in business activity since August 2015 during May. 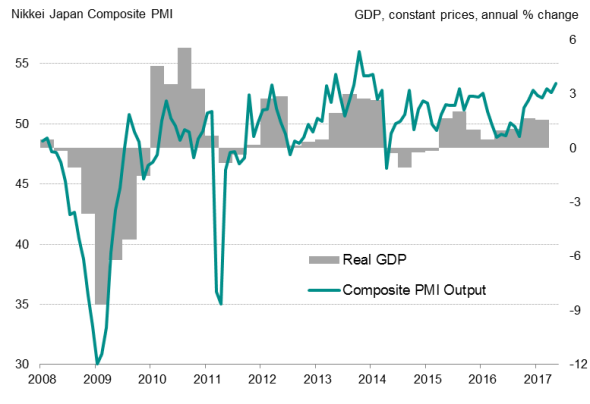 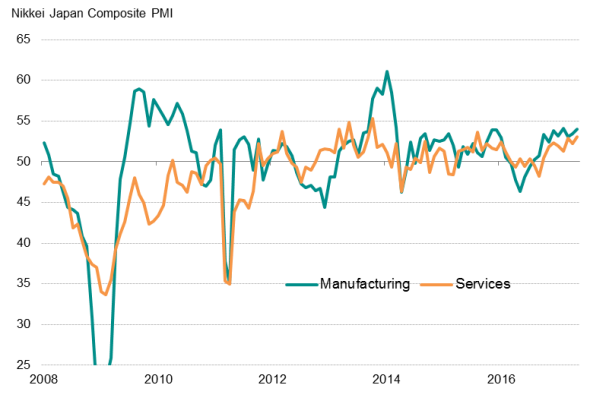 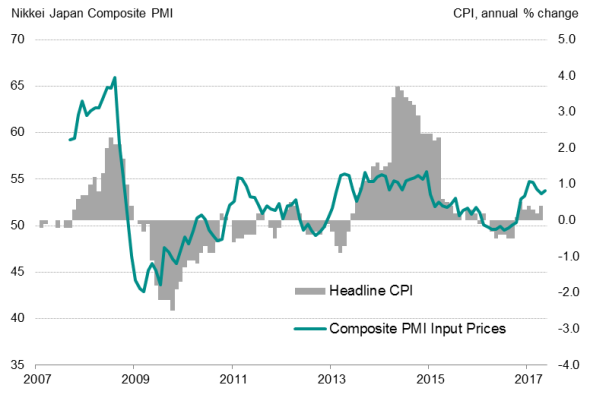 Growth in the manufacturing sector meanwhile strengthened further. The rate of factory output growth remained well above the historical average and was the second strongest so far this year. Within manufacturing, solid growth at investment goods producers pointed to improving capital expenditure, as has been the case over the past eight months.

Overall backlogs meanwhile increased at the joint-highest rate in over three years, which led to firms hiring more staff. Employment growth was at the highest in just over a decade (on par with November 2007).

Solid economic growth and rising prices have fueled speculation that the Bank of Japan (BOJ) could soon signal its intention to start trimming its stimulus. However, such talk still looks premature. BOJ governor Haruhiko Kuroda said recently that now is not the time to announce an exit strategy to its stimulus programme.

While the central bank has acknowledged recent improvements in the Japanese economy, it stressed that inflationary pressures remain subdued. Easing cost pressures, as signalled by recent PMI surveys, could therefore add to the argument that the BOJ should be in no hurry to start tapering its asset purchasing programme.