Eurozone business activity came close to stabilising in December, according to preliminary PMI data. Stronger manufacturing output growth, led by Germany, was accompanied by a marked slowing in the rate of decline of service sector activity. Encouragingly, future output expectations jumped to a 32-month high, as prospects brightened amid recent news on vaccine developments.

A better than expected end to the year

The survey data suggest that the eurozone economy is faring better than expected in December. The IHS Markit flash composite PMI came in at 49.8, ahead of consensus expectations of 45.8, as polled by Reuters. As such, the data hint at the economy close to stabilising after having been plunged back into a severe decline in November amid renewed coronavirus disease 2019 (COVID-19) lockdown measures. 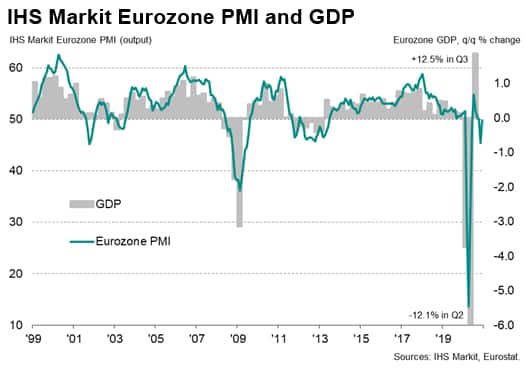 The fourth quarter downturn consequently looks far less steep than the hit from the pandemic seen earlier in the year. Although down from 52.4 in the third quarter, the fourth quarter average of 48.4 is far higher than the mean of 31.3 seen in the second quarter.

The picture is nevertheless very mixed by sector. Although manufacturing output growth accelerated in December, having slowed in November, the service sector saw output contract for a fourth successive month, albeit with the rate of decline easing markedly to the slowest since September as fewer companies reported output to have been hit by lockdown restrictions compared to November.

In fact it was this sharp easing in the service sector which was the main driver behind the PMI coming in higher than anticipated: analysts were merely expecting the services PMI to rise from 41.7 to 41.9, but the flash reading came in at 47.3. However, note that at 55.5 the headline manufacturing PMI also beat expectations (53.0). 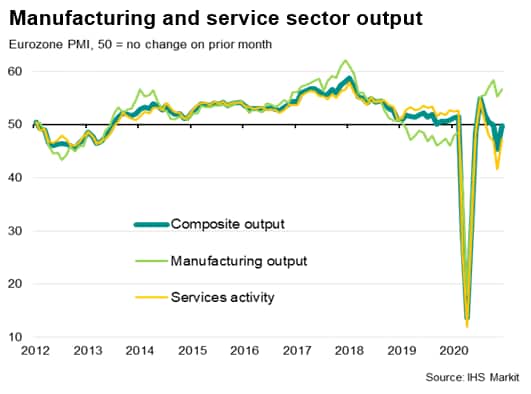 A key differential between the performance of manufacturing and services has been in terms of exports. While exports of goods rose at the second-fastest rate in 34 months, falling just short of October's recent high, service sector exports once again fell sharply, the rate of decline moderating only slightly on November due to ongoing strict travel and tourism restrictions. 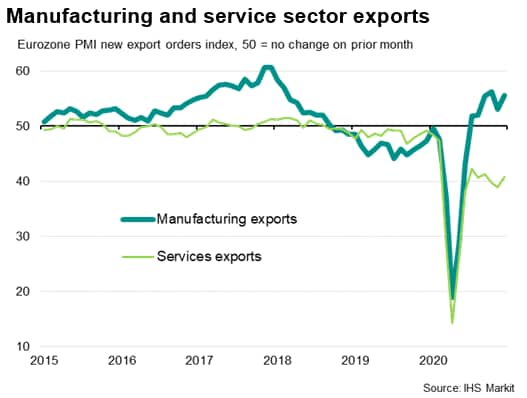 Germany, with goods exports playing an important role in the economy, has consequently continued to outperform the eurozone average. 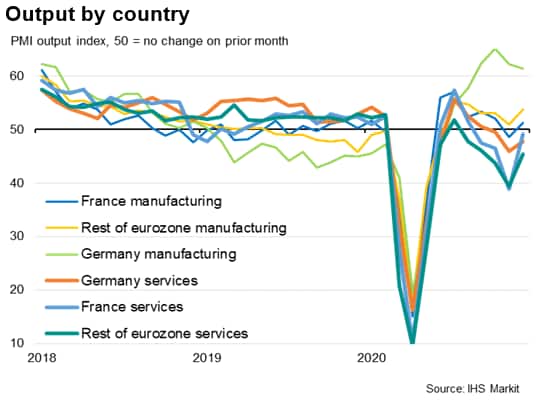 Germany reported an expansion of output for the sixth successive month, its flash composite PMI rising from 51.7 to 52.5 in December. Manufacturing output growth cooled for a second month running but remained among the highest seen in the survey's history, accompanied by a moderation in the service sector's downturn.

Output meanwhile continued to fall in France for a fourth successive month, though the flash composite PMI jumped from 40.6 to 49.6 to indicate a sharp easing in the rate of contraction to the slowest seen over this period of decline. Manufacturing output returned to modest growth and service sector activity came close to steadying.

A more substantial contraction of activity was reported in the rest of the eurozone, though even here the rate of decline waned to the weakest since September as improved manufacturing output growth helped counter a moderating drop in services output. The flash composite output index rose from 42.8 to 47.5.

In addition to the fourth quarter coming in ahead of consensus expectations, companies have also become increasingly optimistic about the year ahead, with vaccine roll-outs expected to help restore businesses to more normal trading conditions as 2021 progresses.

Business expectations about output in the coming 12 months rose to the highest since April 2018. Sentiment about future prospects hit a 27-month high in the service sector and a 34-month high in manufacturing. 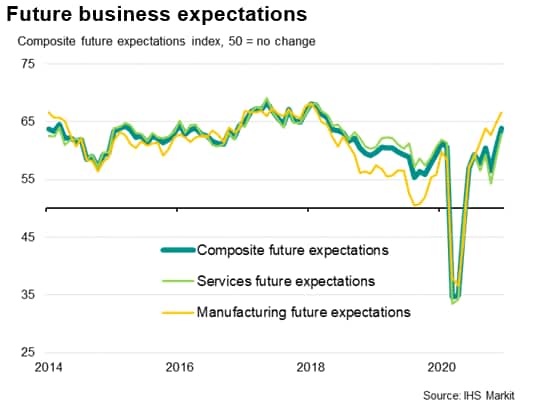 However, while vaccines mean there's light at the end of the tunnel, the near-term still looks very challenging for many consumer-facing companies. Although manufacturing is reporting strong growth, fuelled by rising exports and a booming performance from Germany in particular, the service sector remains in decline amid ongoing social distancing restrictions. Many of these containment measures look likely to remain in place for some time to come, constraining the economy as we head into the new year. After contracting 7.4% in 2020, IHS Markit's forecasting team is anticipating GDP to rise by just 3.7% in 2021.