Asia fares well for corporate sustainability management, but now must pick up the pace. The 2019 SAM Corporate Sustainability Assessment (CSA) results show that corporate sustainability performance across Asia is holding up well and compares favorably to many peers around the world. Yet to further enhance Asia’s sustainability profile, some companies must give greater emphasis to ESG issues, such as executive compensation, gender diversity, and environment-related concerns around water, fuel, raw materials and low carbon emissions.

The Asia Progress Report 2019 is an analysis of selected highlights from the SAM CSA in which 372 Asian companies actively participated, rising from 327 in 2018. These companies are from: China, Hong Kong, India, Japan Republic of Korea (South Korea), Malaysia, the Philippines, Singapore, Taiwan, and Thailand. Additionally, this year the first Indonesian company actively participated.

Asian companies are committed to sustainability and are performing well globally

The rising participation rate in Asia overall, is a strong start to the analysis, indicating that more companies are proactively choosing to engage in the management of sustainability and to be benchmarked alongside their peers.

Average scores show consistency in the sustainability performance of Asian countries. The region of Asia-Pacific (also including Australia, Macao, New Zealand, and the UAE), scoring an average of 57 again outperformed Latin America (52) and North America (51). Also, for the second year, the countries achieving the highest average scores for corporate sustainability performance were Thailand (73), Taiwan (79), and South Korea (66). Out of all the countries in focus for this report, average corporate Total Sustainability Scores rose or remained stable for seven. 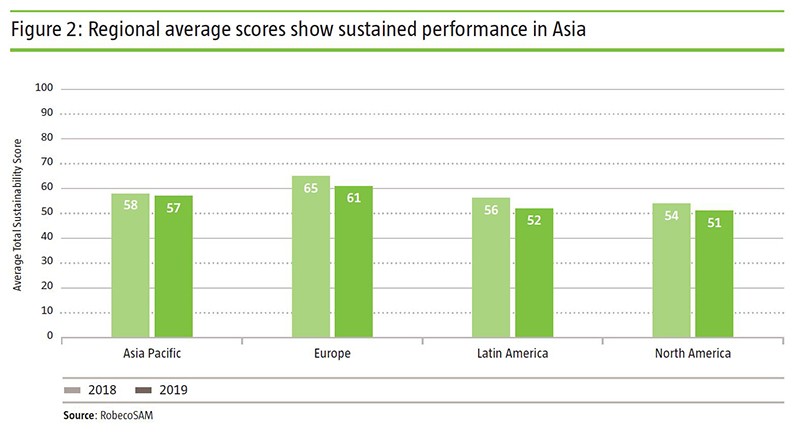 Looking at the range of scores in each country, actively participating companies are shown to have the highest scores across each country of Asia, with the top score of 92 from a Thai company. The source of the lowest scores across Asia are companies which have been assessed solely on their publicly available information.

The DJSI series uses CSA company scores for the annual index rebalancing. The DJSI World Index this year has 318 companies, of which 33 are Japanese, 10% of the entire index membership and a similar number to last year. For other Asian countries’ DJSI World membership is also stable. Those countries which are not represented at all on this index are companies from countries with low CSA participation rates and/or companies from countries that also show weak overall corporate sustainability performance: China, Indonesia, Malaysia, and the Philippines. Companies eligible and achieving a place in the DJSI Asia Pacific are from Hong Kong, Japan, Singapore, and South Korea. For the DJSI Emerging Markets Asian membership remained stable, coming from China, India, Malaysia, Taiwan, Thailand, and the Philippines.

From analysis of the CSA’s Economic, Environmental, and Social Dimensions, Asia’s performance is good overall. Although no significant improvement, there have been no major backward steps. Corporate Governance is the Economic Dimension criterion where Asia’s corporates are weakest, scoring lower than for the four other general criteria. This is due to their poorer Corporate Governance performance, particularly on the topics of Executive Compensation and boardroom Gender Diversity. Conversely, Codes of Business Conduct, is where Asian corporates score better than in all other criteria. 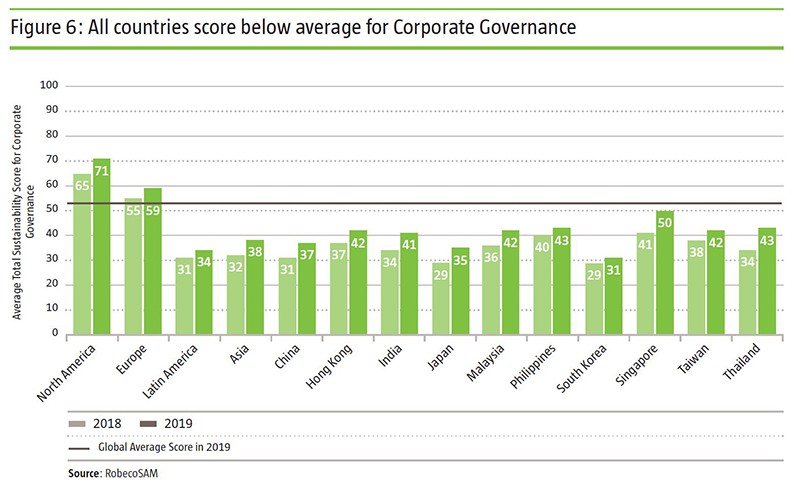 Compared to these economic challenges, across the Environmental Dimension, Asian firms manage sustainability well, scoring above the global average for all three criteria. Notably Environmental Reporting is the only one of these where companies outperform other firms around the world, through comprehensive reporting across all business operations using KPIs and attaining external assurance. It is in the industry-specific criteria such as Water Operations, Fuel Efficiency, and Raw Material Sourcing where Asia is below the global average.

Management of social sustainability issues is particularly strong in Asia, where corporates scored above the global average for all six of the general criteria. Of these six, the highest score is for Corporate Citizenship & Philanthropy. Additionally, for industry-specific social sustainability topics, corporates in Asia are outperforming globally. Labor Practice Indicators stands out for the advances made across all but two countries, with an above average performance for all three aspects: Gender Diversity (below executive level), Equal Remuneration, and Freedom of Association.

Asia is ready to pick up the pace