SAM’s 2019 Status Report for Europe highlights key strengths and specific areas of improvement that European companies need to work on to attract inflows from sustainability-oriented investors.

A relatively wide distribution of Average Scores by country in criteria such as gender equality in the workforce and incentives for management of climate issues shows that companies in European countries with weaker results can still learn a lot from their peers in neighboring countries.

European companies outperform the global average in terms of their sustainability performance, SAM’s Europe Status Report 2019 reveals – a finding that seems to endorse Europe’s international reputation as a forerunner of sustainability thinking. But while the report shows that European companies have an overall solid understanding of how to address corporate sustainability, it also points to significant room for improvement overall as well as in specific areas.

Europe outperforms overall, but fails to make much progress

European companies’ higher average scores in the 2019 CSA compared to their peers in Asia, Latin America, and North America seem to confirm Europe’s reputation as a global leader in sustainability thinking, corporate strategy, and business practices. However, the companies’ average scores of 60, 67 and 58 (out of 100) for the Economic, Environmental and Social Dimensions, respectively, point to considerable further room for improvement across most companies.

Among the 10 countries featured in the report, Spain stands out with particularly strong absolute corporate performance in all three Dimensions, while Russia is the clear laggard which may be attributed to the fact that the number of first-time participants in the CSA that was significant in 2019. All other country Average Scores are in a relatively tight, roughly 10-point range. This seems to indicate a similar level of commitment to sustainability management and transparency across these countries. In addition, the CSA results point to a European-wide prioritization of environmental issues over other sustainability issues as companies in all countries except Russia achieved higher Average Scores in the Environmental Dimension than in the Economic and Social Dimensions.

Performance across the Economic, Environmental and Social Dimensions

In the CSA’s Economic Dimension, Europe lags behind the global average on several Corporate Governance topics. In particular, board structure and the transparent definition of management ownership requirements as well as their actual implementation remain areas of weakness for many European firms, especially compared to their North American peers. Conversely, Europe stands out on diversity policy, gender diversity, and executive compensation. 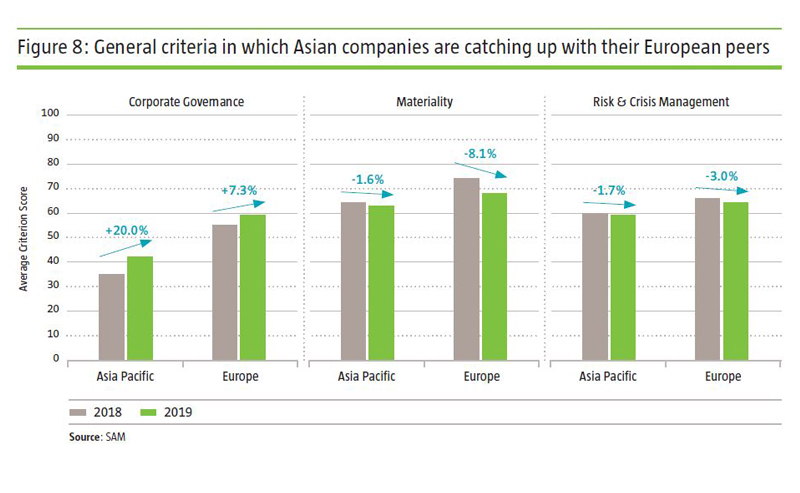 In the Environmental Dimension, Europe scores above the global average in the Climate Strategy, Environmental Reporting, and Operational Eco-Efficiency criteria. However, SAM’s analysis points to significant room for improvement in relation to the adoption of management incentives for the management of climate change issues. 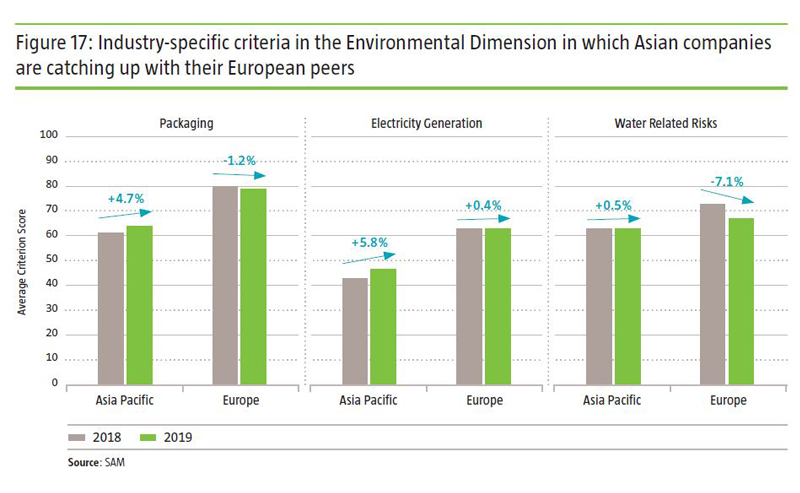 In line with the CSA results for all other global regions, European companies that actively participated in the CSA achieved better Scores for their management of sustainability issues than companies assessed only based on publicly available information. This probably reflects a greater commitment to sustainability and to improving through benchmarking on the part of active participating companies.

In this context, the fact that CSA participation increased in all but one of the 10 countries covered in the report indicates that more companies are taking a progressive, holistic approach to sustainability management and use the CSA process to assist them in this effort. As a credible external assessment of where a company stands in terms of its sustainability efforts and performance, the CSA not only helps companies to identify gaps and close them, but also raises the bar each year. As such, it should contribute to continuous improvements in the European corporate sustainability landscape over time.