In the second quarter of 2022, United States and India were the two largest markets recording 60% of the total contracts. While liberalized electricity markets are dominated by virtual PPAs, regulated markets enter direct PPAs, together making 65% of the contracts in Q2 2022.

Amazon is the largest corporate consumer of renewable electricity with about 1.5 GW of new contracts recorded during second quarter of 2022. In May 2022, Amazon Web Services (AWS) signed two PPAs for its California operations in the United States to procure 300 MW solar PV and 150 MW hybrid with storage capacity from AES Corporation. As of 2021, Amazon has achieved 85% share of its procurement through renewables and is on its way to achieve 100% renewable procurement target globally by 2025.

The second largest offtaker of renewable PPAs during Q2 2022 is India-based materials company JSW Steel which announced to procure hybrid renewables including 225 MW solar PV and 733 MW onshore wind for its Vijaynagara, Karnataka facility. A 25-year direct PPA is signed with JSW Energy (renewable IPP) under a group captive mode. JSW Group has a target to reduce its carbon footprint by 50% with 20 GW renewable energy installed capacity by 2030 and achieve carbon neutrality by 2050. As of FY2022, JSW Energy has a 230 MW renewable installed capacity and a pipeline of 2.2 GW.

The third largest clean energy offtaker in Q2 2022 is services company Meta. In April 2022, Meta and TransAlta signed a long term PPA for 100% of the onshore wind capacity from its pipeline project Horizon Hill expected to come online in 2023. Meta reportedly meets 100% of its global electricity demand from renewable sources since 2020. 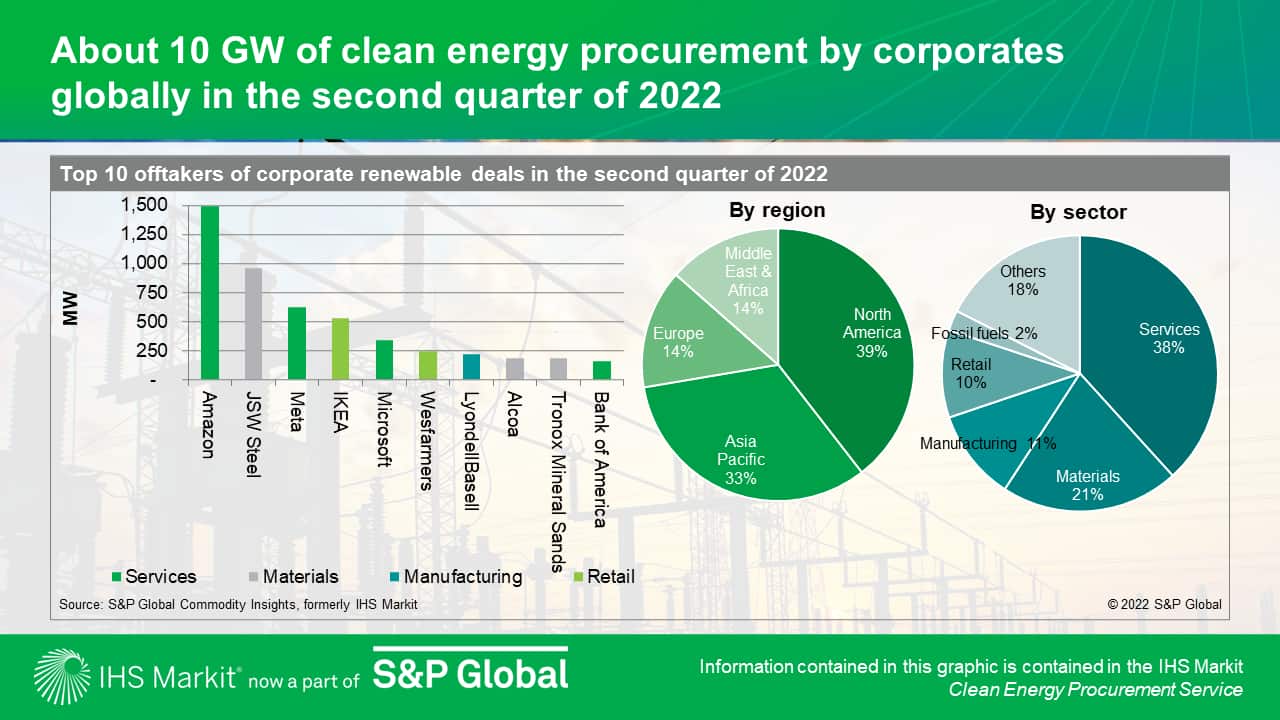 More and more companies are announcing 100% renewable procurement targets with two-thirds of targets announced in 2022 are from companies headquartered in Asia Pacific with about half of them in manufacturing sector.