May 2022 — ESG fund rule proposals in the U.S., Singapore’s taxonomy

Regulation is shaping the sustainability agenda and changing the way companies do business in different jurisdictions, but keeping pace with constant regulatory updates has become a mammoth task for businesses and investors. In this recurring series, S&P Global Sustainable1 presents key regulatory developments and disclosure standards from around the world.

In this month’s update, we look at proposals from the U.S. Securities and Exchange Commission to regulate the use of ESG terms in investment fund names and add new climate disclosures for ESG funds, Singapore’s “traffic light” taxonomy and clarifications on how investment firms need to apply EU sustainable disclosure rules.

The U.S. Securities and Exchange Commission on May 25 released two proposals: one extending the “Fund Names” rule to include ESG terminology, which will mean that funds with ESG language in their names must invest 80% of their assets in holdings that align with that language; and another requiring disclosures for ESG funds. Firms selling ESG funds would be required to report the information in "structured data language” to allow for comparability across funds. Some funds would also need to disclose what ESG impacts they seek to achieve and what key metrics they use to assess progress. Firms claiming to consider environmental factors in their investment strategies would be required to disclose the carbon footprint of their portfolios. A consultation on the proposals is open for 60 days after their publication in the Federal Register.

A Los Angeles court on May 13 declared a state law requiring publicly listed corporations in California to have a minimum number of women on their boards unconstitutional, just a month after a similar judgement striking down a law that required companies to have at least one board director “from an underrepresented community.” The judge ruled that the law constituted sexual discrimination and therefore violated the equal protection clause of the California Constitution. The defendants had failed to prove that the gender diversity law was “necessary” for boosting the Californian economy and improving opportunities for women in the workplace, the ruling said.

The European Supervisory Authorities, which include the European Securities and Markets Authority, the European Banking Authority and the European Insurance and Occupational Pensions Authority, published on May 6 two requests from the European Commission to propose amendments to the regulatory technical standards under the Sustainable Finance Disclosure Regulation, or SFDR. The SFDR has been phased in in since March 10, 2021, and requires asset managers, pension funds and insurers to disclose how they consider ESG risks in their investment decisions. The first request is to create disclosure requirements for natural gas and nuclear energy investments following the proposed inclusion of gas and nuclear in the EU taxonomy, a classification system of sustainable activities. The second request asks the supervisory authorities to review SFDR standards adopted in April, including extending the list of indicators for principle adverse impacts, or the negative impacts of investment decisions on sustainability criteria and include greenhouse gas emissions and board diversity. The authorities have until Sept. 30 to submit the amendments on the first request and 12 months for the second.

Investment firms managing funds that promote environmental considerations must declare that the fund has zero alignment with the EU taxonomy if they are unable to collect the necessary environmental objective data, the European Commission said on May 25. In answers clarifying the application of the Sustainable Finance Disclosure Regulation, the Commission also said investment firms must only disclose a fund’s taxonomy-alignment when reliable data is available or the company could risk infringing on EU regulations. The Commission also provided answers to questions on good governance requirements and fund disclosure on the principal adverse impacts. 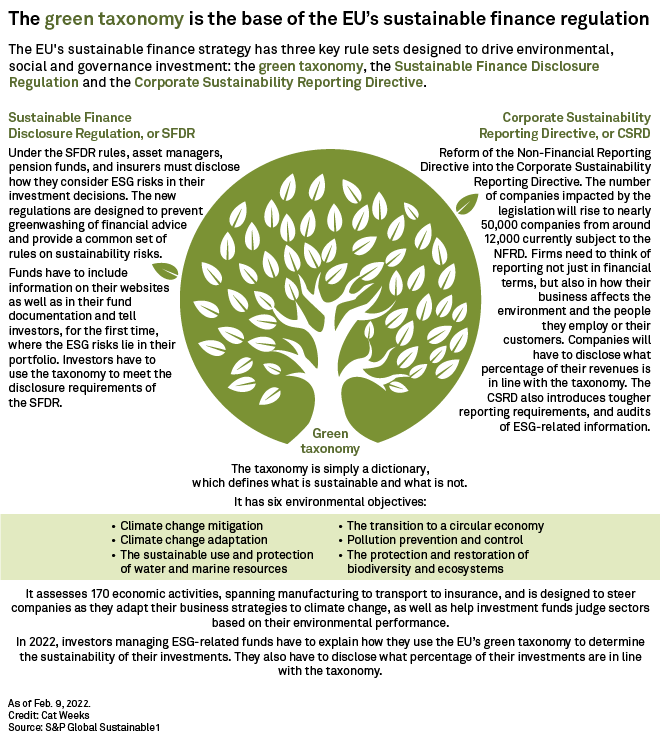 Members of the European Parliament’s Economic and Monetary Affairs Committee on May 17 adopted their negotiating position on the European Commission’s proposal to create an EU Green Bond Standard. The committee is seeking tougher rules than the initial proposal, including requiring that issuers have verified transition plans, allowing investors to take legal action should a green bond depreciate due to an issuer’s noncompliance with the standards, and requiring issuers to state on the first page of a bond’s factsheet if proceeds will be allocated to nuclear or gas-related projects. The committee has now started negotiations with EU member states and the Commission to find common ground on the file. 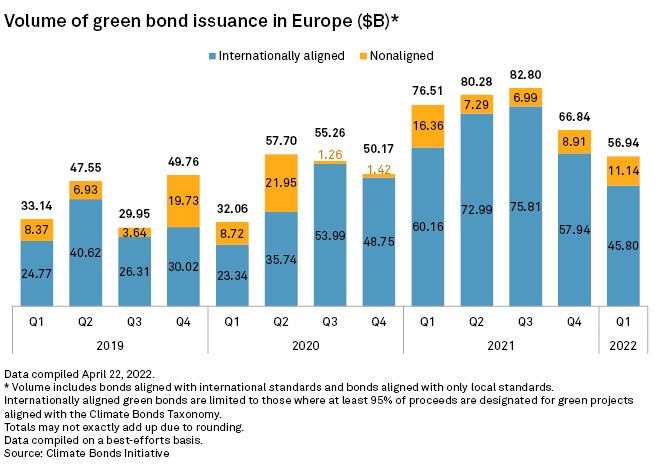 The European Commission on May 18 presented a plan aimed at drastically reducing the EU’s dependence on Russian oil and gas and ramping up production of renewables. The Commission proposed increasing the EU’s 2030 target for renewables to 45% from 40% and set out a strategy to double solar capacity by 2025. The plan targets €210 billion of investments by 2027 in renewables and hydrogen infrastructure, energy efficiency and liquified natural gas imports. It also aims to make it simpler to obtain permits for major renewable projects. The Commission is also proposing to raise the EU’s energy-savings target for 2030 to 13% from 9%. 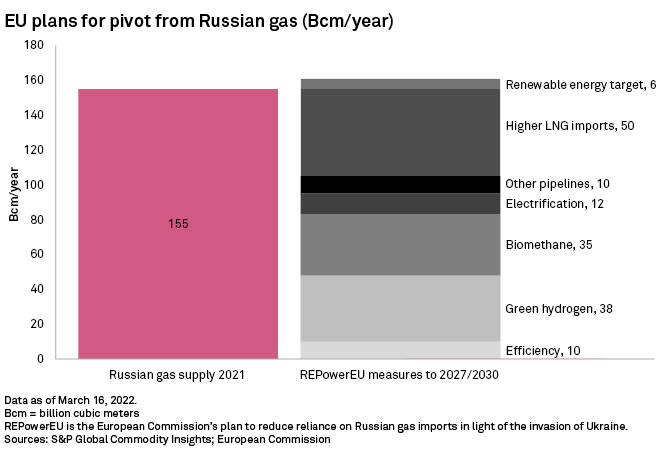 The European Securities and Markets Authority, or ESMA, on May 31 published a regulatory briefing outlining common guidelines for EU national supervisors when overseeing ESG-related investment funds. ESMA said the guidance would ensure convergence in the supervision of sustainable investment funds and combat greenwashing. In the briefing, ESMA states that fund names should not be “misleading” and investment firms should show material evidence when they use terms such as “green,” “ethical,” “social” or “any other ESG-related terms.” ESMA said it may update the briefing after new technical standards under the Sustainable Finance Disclosures Regulation come into force at the beginning of 2023. In February, ESMA published its new sustainable finance roadmap, in which it said it was planning to make tackling greenwashing one of its key priorities over the next three years.

U.K. financial regulators in May set out the country’s regulatory plans for the next 24 months, including a series of measures dedicated to ESG investing. The Financial Conduct Authority plans to publish a feedback statement in late June on the role of ESG in capital markets, including green, social and sustainable debt instruments and ESG data and rating providers. At the end of July, it aims to publish a consultation paper on new disclosure rules called the Sustainability Disclosure Requirements. Alongside the Prudential Regulation Authority, which oversees financial institutions, it will publish an additional consultation on diversity in financial services in the third quarter. The U.K. is also planning to finalize technical screening criteria for climate change adaptation and mitigation in its taxonomy by end-2022.

The U.K. said on May 10 that Parliament plans to introduce a bill on modern slavery, which will strengthen requirements for companies with £36 million or more in revenues to publish a report demonstrating what steps they have taken to prevent modern slavery in their operations and supply chains. The bill will also mandate what needs to be included in companies’ modern slavery reports and require corporations to publish their statements on a government-run registry. The requirements will be extended to public bodies. Penalties for organizations that do not comply will be introduced. The government did not say when it expects the bill to become law.

The newly launched U.K.-government mandated Transition Plan Taskforce launched a consultation on May 11 on what plans private companies are making to become carbon neutral. Feedback will help build regulations requiring some financial institutions and listed companies to publish climate transition plans. While many firms are publishing net zero plans, there is “huge variability in the quality and robustness” of the plans, the taskforce said. The U.K. government is moving toward making the publication of net zero transition plans mandatory.

China Enterprise Reform and Development Society, a state-backed think tank, has published China’s first ESG disclosure standard, developed with the help of Chinese insurer Ping An and other companies, Ping An announced on May 11. The standard has been created to address the specificities of the Chinese market and is based on Chinese laws, regulations and standards, Ping An said. It provides companies with a framework for disclosing ESG criteria, including specific principles, indictors, requirements, responsibilities and supervision for different kinds and sizes of corporations. It is designed to serve as a reference for companies’ own and third-party ESG evaluations. The standards are effective from June 1.

The Green Finance Industry Taskforce, set up by the Monetary Authority of Singapore, launched a second consultation on May 12 for the city-state’s green taxonomy, building on an earlier proposal published in January 2021. The Taskforce is seeking comment on its proposed thresholds and criteria for the energy, transport and real estate sectors, using a traffic light system. Green activities are on a net zero pathway, amber represents transition, while red refers to activities that are currently incompatible with reaching net zero. The Taskforce will launch a third consultation on another five sectors later this year, including agriculture and industry, with the aim of finalizing the taxonomy in 2023. The eight sectors account for 90% of greenhouse gas emissions in 10 southeast Asian countries, including the Philippines, Malaysia and Indonesia. Taxonomies have been springing up globally as a way of steering investment into sustainable activities. South Africa and Columbia recently launched their own taxonomies.

The Stock Exchange of Thailand said on May 6 it had published a sustainability reporting guide for listed companies to guide their sustainable development and investment. It provides ESG metrics for each industrial sector that are material for their business and is aimed at helping companies disclose sustainability-related information according to set standards, to ensure transparency and data quality. The disclosures will be added to an ESG data platform currently under development, which will function as a data center of all Thai ESG-related information, the exchange said.