Regulation is shaping the sustainability agenda and changing the way companies do business in different jurisdictions, but keeping pace with constant regulatory updates has become a mammoth task for businesses and investors. In this recurring series, S&P Global Sustainable1 presents key environmental, social and governance regulatory developments and disclosure standards from around the world.

In this month’s update, we look at an agreement between the European Parliament and EU governments on gender quotas on boards, new green finance guidelines in China for financial institutions and Canada’s new carbon emissions offset credit system.

The European Parliament and the Council of the EU, made up of government ministers from the 27 EU member states, reached a provisional agreement on June 7 on a draft bill to increase the representation of women on corporate boards. At least 40% of non-executive director positions, or 33% of all director posts, must be occupied by the under-represented sex, the European Parliament said in a statement. Companies will need to comply with the new rules by June 30, 2026. Listed companies will have to disclose their board’s gender composition to their national authorities annually. If they fail to meet the quotas, they will have to explain why and may face fines or penalties. Small and medium-sized businesses with fewer than 250 employees will not be subject to the quotas, the parliament said. 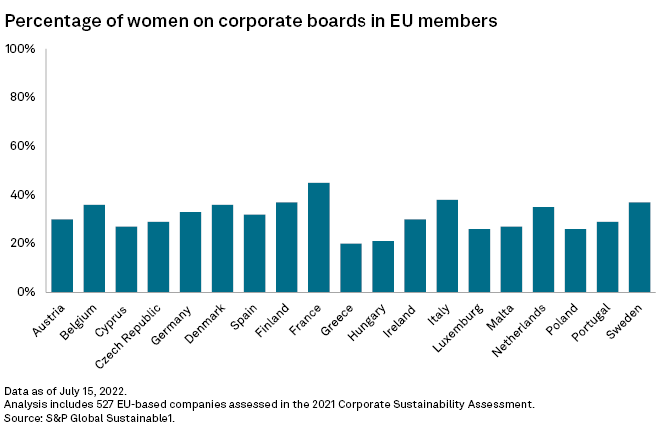 The European Parliament and the Council of the EU reached on June 21 a provisional agreement on new sustainability reporting rules for companies. The Corporate Sustainability Reporting Directive, proposed by the European Commission in April 2021, is a reform of the EU’s Non-Financial Reporting Directive introduced in 2014 to require large companies to report on environmental and social issues. The Council said the reform introduces more detailed reporting requirements on large companies to report on environmental issues and human rights, as well as governance criteria. The rules will be effective from Jan. 1, 2024, for companies already subject to the NFRD; from Jan. 1, 2025, for companies not already required to report under the NFRD; and from Jan. 1, 2026, for listed small- and medium-sized businesses.

The European Supervisory Authorities, which include the European Securities and Markets Authority, the European Banking Authority and the European Insurance and Occupational Pensions Authority, published on June 2 a number of clarifications on the draft technical standards issued under the Sustainable Finance Disclosure Regulation. The SFDR has been phased in since March 10, 2021, and requires asset managers, pension funds and insurers to disclose how they consider ESG risks in their investment decisions. The ESAs stipulate that principle adverse impacts, or the negative impacts of investment decisions on sustainability criteria, are mandatory for the “do not significantly harm” disclosures intended to confirm that an investment does not harm any of a financial product’s environmental or social sustainable goals. The supervisory authorities also said requirements to disclose the “minimum proportion” of taxonomy-aligned investments in precontractual financial product disclosures are “binding commitments" to provide transparency for investors. The EU taxonomy is a classification system of sustainable economic activities.

The Council of the EU, which brings together government ministers from the 27 EU member states, adopted on June 27 and June 29 its negotiating position on several proposals in the European Commission’s broad Fit for 55 climate package presented in July 2021. The plan is designed to reduce carbon emissions by 55% compared with 1990 levels by 2030. The Council said it had agreed to keep the 61% emission reduction targets in sectors covered by the EU’s Emissions Trading System, or ETS.  It also approved the phasing out of free allowances for sectors subject to a proposed carbon levy on some imports — the Carbon Border Adjustment Mechanism, or CBAM — over a 10-year period between 2026 and 2035. It also agreed to set a binding EU-level target of 40% of energy from renewable sources in the overall energy mix by 2030. The EU Parliament said it was in favor of increasing the ETS’ 2030 emissions target to 63% from 61%. It also said it supported introducing the CBAM earlier as well as ending free ETS allowances by 2032. The Council and the European Parliament are now set to negotiate on the directives’ final text. 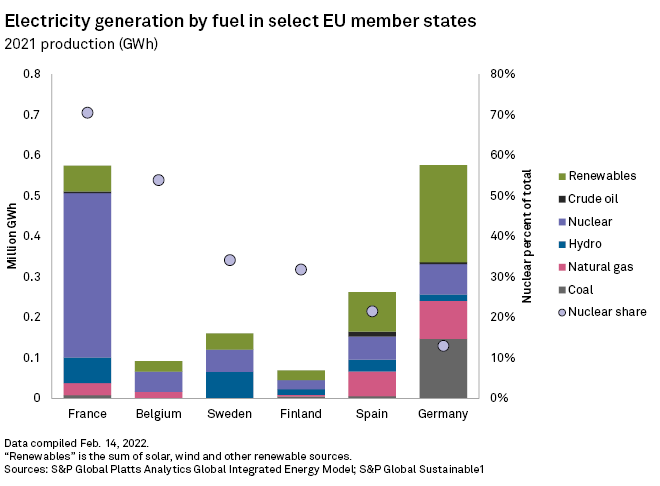 The European Securities and Market Authority on June 27 published the results of its consultation on the ESG ratings space, writing that users of ESG data and ratings cited poor coverage of specific sectors, insufficient granularity of data and a lack of transparency on the methodologies of ESG rating providers. The regulator also said that the ESG ratings space is split between a few very large non-EU providers and many significantly smaller EU entities. Although respondents were spread throughout about half the 27 EU member states, many of them were concentrated in just three countries, ESMA said.

The U.K.’s Financial Reporting Council, which oversees auditors, accountants and actuaries, published a consultation on June 15 on proposed changes to actuarial standards that would require actuaries to consider climate change risks in their work. The proposed requirements would ensure actuaries include climate as well as environmental, social and governance risks in calculating future material risk, the regulator said. While actuaries have built experience in more established risks, they need to take non-traditional risks such as climate change into greater consideration, the FRC said. The consultation closes on Sept. 7.

Japan’s financial regulator, the Financial Services Agency, or FSA, said ESG data providers need to ensure they are giving their clients quality data by setting clear procedures and analyzing key information in detail. In a report setting out a code of conduct for the ESG industry published in June, it said data providers must make sure they have qualified staff to provide clients with the quality of data they require. It also said data providers must establish policies to enable them to make decisions independently and address potential conflicts of interest. The committee that wrote the report said it expects the FSA to treat its recommendations as a “code of conduct” for ESG data providers in Japan.

The China Banking and Insurance Regulatory Commission published a set of green finance guidelines on June 2 requiring the banking and insurance sectors to play an active role in the transition to a low-carbon economy. The guidelines stipulate that the boards of financial institutions will be responsible for developing green finance strategies, while senior management will oversee setting objectives, the commission said. Banking and insurance groups will have to adjust and improve their credit and investment policies and support carbon emissions reduction. They will have to gradually reduce the carbon intensity of their asset portfolios, with the aim of making them carbon neutral, the commission wrote. Financial institutions will have to strengthen their ESG management throughout their lending process, according to the commission. They will also be required to strengthen disclosures as well as establish a green finance assessment and evaluation system, the commission said.

The Monetary Authority of Singapore and the Singapore Ministry of Finance published on June 9 a framework establishing guidelines for sovereign green bond issuances. The framework is aligned with international principles such as the International Capital Market Association’s Green Bond Principles 2021 and the ASEAN Capital Markets Forum ASEAN Green Bond Standards 2018. Singapore is aiming to issue up to S$35 billion in green bonds by 2030. In addition, the Singapore government has committed to annual reporting on the environmental, and where possible, the social benefits of the green bond issuances.

The Australian Securities & Investment Commission, Australia’s corporate, markets and financial services regulator, released guidance on June 14 on how managed and superannuation funds can avoid greenwashing. It defines greenwashing as “misrepresenting the extent to which a financial product or investment strategy is environmentally friendly, sustainable or ethical.” It said it had reviewed a sample of superannuation and investment funds and had identified room for improvement. Fund managers need to use clear labels, provide definitions of sustainability terms used and explain how they factor sustainability considerations into their investment strategy, the commission said.

The U.S. Supreme Court ruled on June 30 to constrain the U.S. Environmental Protection Agency's authority to regulate greenhouse gas emissions from existing power plants. The court found that the Clean Power Plan, which was presented in 2015 but never came into effect, adopted an approach to reducing power plant emissions that exceeded the agency's authority. Congress would need to give that authority expressly to the agency under a legal standard known as the "major questions doctrine," the majority held in an opinion written by Chief Justice John Roberts. In a joint dissent, the court's liberal justices argued that the decision will strip the EPA of power given by Congress to respond to "the most pressing environmental challenge of our time." 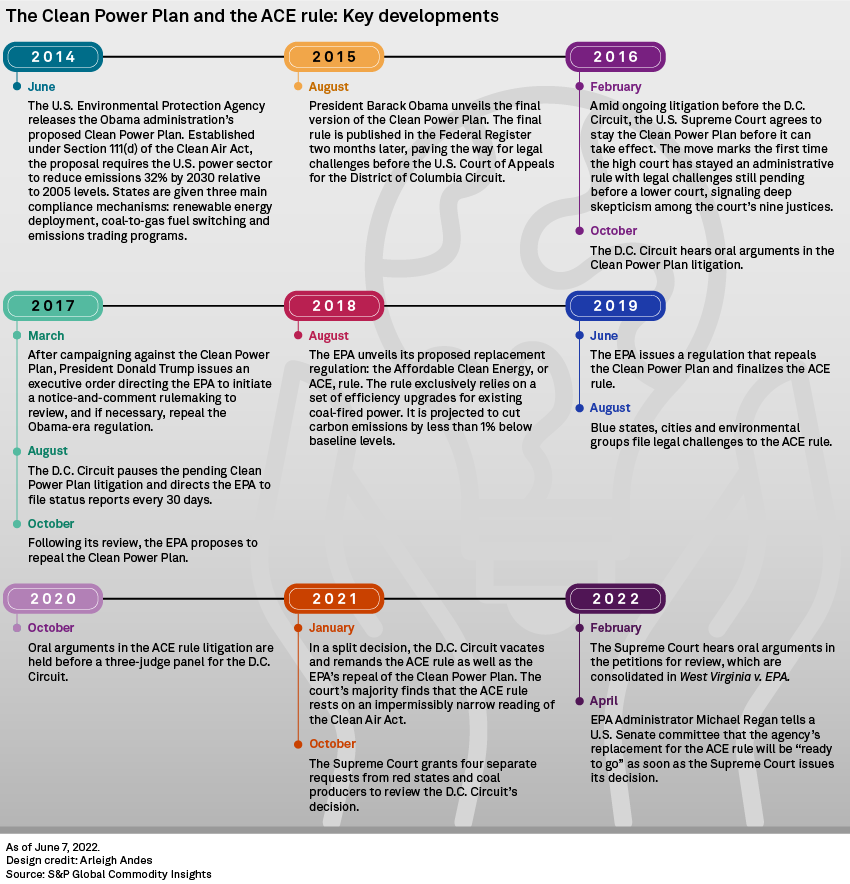 The Canadian government launched on June 8 a credit system to offset greenhouse gas emissions, as part of its 2030 plan to reduce carbon emissions by 40% below 2005 levels by 2030 and to achieve net zero emissions by 2050. Under the system, registered participants will follow a federal offset protocol to carry out projects, which will generate one tradeable offset credit for every tonne of carbon emissions they remove from the atmosphere. In the beginning, municipalities and other landfill operators will be able to generate credits for recovering landfill gas. Additional rules are being developed for four other sectors, including advanced refrigeration and agriculture. The government also said it was planning to develop protocols for carbon capture and storage, technologies that directly remove carbon dioxide from the atmosphere and permanently store it underground.


This list is not exhaustive, and information is current as of the publication date. If there are additional significant regulatory developments we should cover going forward, please reach out to Jennifer Laidlaw at jennifer.laidlaw@spglobal.com. We welcome feedback.