The strategic environmental importance of the Amazon, including its biodiversity, natural resources, and impact on global carbon emissions, makes Latin America a major focal point for climate-change-related initiatives over the next decade, with the region and its governments facing increased pressure from the United States, European governments, financial institutions, and environmentally related NGOs to take measures to preserve the Amazon rainforest. Latin America has also a long history of social conflicts driven by local community opposition to projects, particularly in the extractive sector. With a global trend emerging towards stricter environmental, social and governance (ESG) related regulations, NGOs and social media are offering local communities new avenues to publicize their concerns to a broad and receptive international audience. Such a situation will raise regulatory compliance requirements in the region over the next years as well as reputational and project delay/cancellation risks for projects opposed by local indigenous or farming communities.

As US and EU public concern for environmental issues and climate change grows and regulation of environmental standards becomes more pervasive, political leaders are also becoming more vocal supporters of environmentally friendly policies, looking to demonstrate green credentials or fulfill campaign promises. As a result, increased pressure on Latin America from European governments and the US administration appears highly likely.

While campaigning for the presidency, US president Joe Biden stated during a debate on 29 September 2020 that he would offer Brazil USD 20 billion to halt Amazon rainforest deforestation and warned that if deforestation continued, the US would impose economic sanctions on Brazil. Brazilian President Jair Bolsonaro rejected the offer, arguing that Biden's statement demonstrated a disregard for Brazilian sovereignty. The assertion that Brazil's environmental regulations are an issue of sovereignty (Bolsonaro argues that his policies are aimed at generating employment and economic development) and therefore should not be subject to foreign involvement or pressure highlights the conflict that companies operating in the region are increasingly likely to face. Meeting a local country's environmental regulations increasingly will prove inadequate for companies to satisfy pressure groups, forcing them to demonstrate and implement their own ESG policies, including commitments to demonstrate deforestation-free, sustainable supply chains. NGOs focused on environmental issues and climate change are also becoming more prolific and by their use of social media are putting growing pressure on companies to demonstrate ESG-friendly practices.

The role of financial institutions

Driven by investor demand and the need to foster transparency and financial and economic long-term performance, central banks and regulators in Europe are moving to create a regulatory framework to disclose and manage climate-related and ESG risks. Financial institutions are increasingly seeking to understand the impact of policy, regulatory, and technological adjustments of the transition to a low-carbon economy. Global changes in policy, particularly in developed countries such as the US and in Europe, are likely to include measures such as mandatory energy efficiency standards, the removal of fossil fuel and electricity subsidies, and implementation of carbon-pricing mechanisms, alongside shifting consumer preferences and policies to reduce deforestation and foster sustainable land use.

In Latin America, transition risks reflect the need to mitigate greenhouse gas (GHG) emissions to meet the Paris Agreement goals and underpin the fast deployment of low-carbon technologies. Government policies enacted so far have been broad, with no specific requirements for companies, or are still being planned. In addition, there are technical challenges associated with the lack of regulatory tools and infrastructure that threaten to prevent effective policy execution. Although companies are being pushed to disclose their ESG and climate-related risks using various reporting frameworks, such reports are still voluntary and focused on climate risk disclosures rather than management practices.

Social conflicts and prior consultation

Community opposition to mining, infrastructure, and oil projects is widespread throughout Latin America, particularly in Peru, Colombia, Chile, and Mexico. The distribution/pollution of water is often the main source of conflict along with grievances over the perceived lack of compensation and prior consultation of locals. Projects in the region already face increased scrutiny on the design and implementation of environmental and social impact studies, delays and cancellation risks as a result of violent protests or legal action as well as rising reputational risks connected to the community or environmental-related activism. 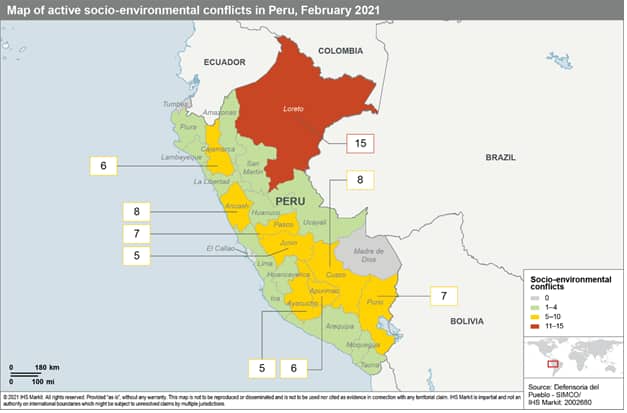 Latin American oil-producing countries, such as Ecuador, Mexico, Venezuela (despite sanctions), and Colombia, remain reliant on oil exports to generate foreign exchange revenue and fund post-pandemic recovery. The prospects of economic development over the next decade will therefore be affected as developed economies seek to prioritize energy transition via planning to decrease reliance on fossil fuel, particularly if energy-producing countries fail to diversify their economies via the promotion of other foreign-exchange generating sectors. However, in other instances, an increasing number of countries, notably Chile, are seeking to capitalize on investors' growing interest in ESG by issuing bonds linked to ESG outcomes or initiating concrete actions towards energy transition. The country has also set itself the goal to produce the cheapest green hydrogen in the world by 2030 and to be among the world's three largest hydrogen exporters by 2040. 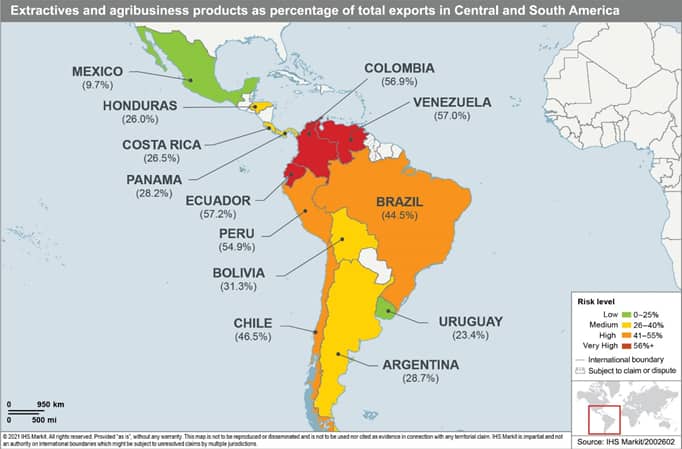 To learn more about this pressing issue, you can listen to our podcast: Episode 81: Sovereign level ESG in Latin America