VLCC freight rates at USD 300,000 per day to carry crude oil from the Middle East to Asia aren’t sustainable for a prolonged period in our view. The cost of transportation now represents in excess of 12% of the cargo’s value, much higher than the typical levels of 1.5% - 2%. The additional cost has been covered by the charterers for contracts already agreed weeks ago, with companies simply focusing on securing ships to carry the cargoes after the US imposed sanctions on COSCO. However, once we start observing a lack of new cargoes, which could start happening this week, sentiment will inevitably change, but only time will tell how long this rally in rates can be maintained. 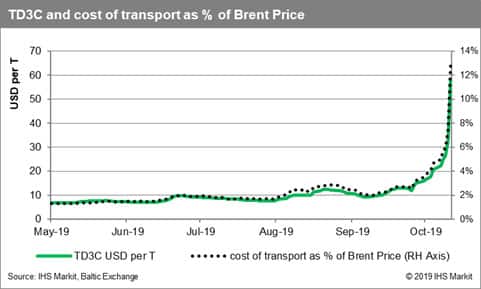 As we highlighted in our earlier article, the dominant role played by tanker subsidiaries of COSCO Shipping Corporation in Chinese oil imports will continue to have a ripple effect as buyers scramble to contract enough VLCC tonnage in a bid to secure the country’s crude oil supply.

The upward movement continued in the freight market of the Middle East Gulf with the VLCC sector having arguably reached highest levels on record. A tanker carrying 270,000 tonnes of crude oil from the region to the Far East is now earning above USD 300,000 per day, for loadings in the first decade of November. The sentiment across the market seems strong, with charterers competing against each other to secure tonnage. Meanwhile, the demand has been getting greater as the October program has added barrels compared to September, keeping the market around 5% busier. Moreover, charterers seem to be quite nervous and concerned and therefore trying to fix further ahead than usual, making the available supply look ever tighter. Just after the first decade of last month (around September 11th) almost nobody was fixing for the forward month (October), but we are aware of almost 30 cargoes that have been fixed already for November loadings. Activity will have to slow-down at some point, but for now the market continues pushing rates to new highs.

The Baltic Exchange’s BDTI stands at 1,941, its highest level since Q4 2008. The market seems to now understand exactly which Chinese vessels are under US sanctions, but some oil companies have now begun to ignore even vessels that have recently called at Venezuela, pushing the eligible fleet lower. Some vessels are currently tied up in dry docking and retrofitting, but some of the activity earlier scheduled for the next couple of weeks is believed to have been postponed as owners try to take advantage of the current freight rates. Owners will continue trying to push rates higher with little sign of slowing down so far. Meanwhile, adverse weather conditions expected in the US Gulf over the next week will cause further delays and tighten supply even further.