The vote should put companies on notice to take threats of votes against board members more seriously and to move quickly to address climate change.

On May 26, shareholders voted to replace at least two members of Exxon Mobil’s board with people nominated by an activist investor group over concerns the company is not moving fast enough to address climate change. Shareholders have threatened for years to oust board members of companies recalcitrant about climate change. Last week’s action shows investors will follow through on that promise.

Exxon’s board member ouster wasn't the only blow to oil majors last week: A Dutch court ordered Royal Dutch Shell PLC to accelerate emissions reductions and cuts its carbon footprint by 45% globally by 2030. And an investor vote called on Chevron Corp. to come up with a plan for curbing emissions at the customer level. S&P Global Sustainable1 views these developments as a sign that oil majors have no choice but to take a more ambitious approach to climate change. 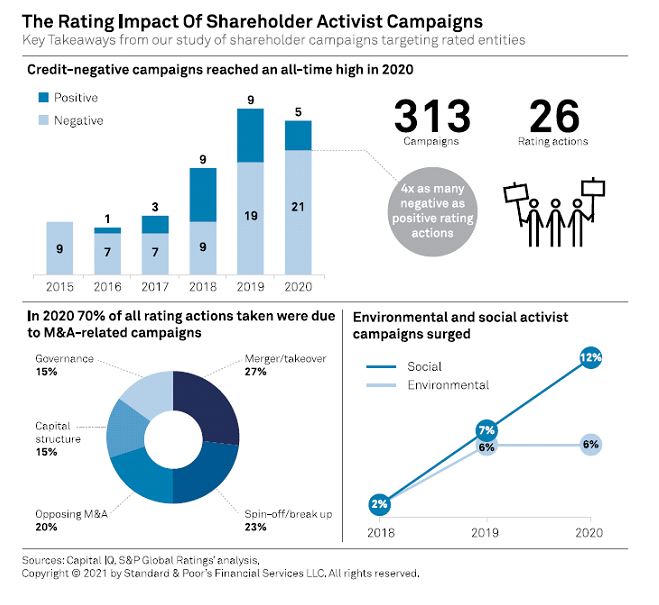 Investor activism can pose a credit rating risk to companies. S&P Global Ratings in March reported that it directly linked 26 rating actions in 2020 to activist campaigns, about the same level as in 2019. The “credit impact of shareholder activism on entities that we rate is largely unfavorable, albeit only moderately so, with most related downgrades being of one notch,” S&P Global Ratings wrote.

Oil companies have a long way to go to meet the goals of the Paris agreement, suggesting we will be hearing much more from the industry’s shareholders. Platts Analytics forecasts that even in the unlikely event that production from the six major international oil companies (ExxonMobil, Chevron, Shell, ConocoPhillips, BP and Total) dropped to zero, global oil supply would still need to contract by another 28 million barrels per day from the peak by 2050 to meet 2-degree warming targets.

Factors that led to the historic vote

Exxon has long held a reputation among the activist investor community as one of least cooperative oil majors when it comes to its willingness to meet with shareholders and to set big targets.

But several years ago the company began making its board members accessible to some investors, such as members of the Climate Action 100+, an investor-led initiative to ensure the world’s largest corporate greenhouse gas emitters take action on climate change.

Exxon also set new climate goals and pledged to disclose its Scope 3 emissions — those associated with its supply chain and with emissions created when customers use Exxon’s products.

But investors weren’t satisfied, and at the company’s 2021 annual meeting voted in two of four board members put forward by Engine No. 1, a small activist investor group aimed at forcing the company to take more aggressive action to slow climate change. The group argued that Exxon had not provided a “coherent and value-enhancing long-term strategy.” Engine No. 1 also suggested that Exxon’s latest moves were meant to placate investors and thus, “without real change, these gains could be short-lived.”

BlackRock, the world’s largest asset manager and Exxon’s second-largest investor, voted for three of the directors put forward by Engine No. 1. 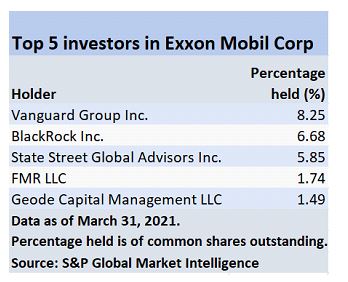 BlackRock in a statement said “more needs to be done in Exxon’s long-term strategy and short-term actions in relation to the energy transition in order to mitigate the impact of climate risk on long-term shareholder value.” BlackRock specifically called out Exxon for not having allocated capital toward reducing Scope 3 emissions, which comprise the vast majority of the company’s emissions.

For its part, Exxon in a statement welcomed its new directors and said it looks forward to “working with them constructively and collectively on behalf of all shareholders.” The outcome of the vote on a third Engine No. 1 board nominee was not known as of the company’s May 26 press release. Exxon could post additional voting results as early as June 2.

What are the implications?

Oil majors can't ignore the possibility that investors will escalate their engagement tactics and vote against uncooperative board members. The vote should put companies on notice to take threats of votes against board members more seriously and to move quickly to address climate change.

And these lessons don’t just apply to companies in the oil and gas industry. Shareholders from across the board are sure to be watching the success of Engine No. 1, and companies in other emissions-heavy sectors would be wise to take note.

The vote also shows that just having a climate plan is not necessarily enough to satisfy investors. Instead, companies need to be able to show in a concrete way how they are aligning with the goals of the Paris Agreement on climate change to limit global warming. Those plans must be comprehensive in scope, include clear short-term goals and targets, provide descriptions of how they will be met, and offer longer-term goals toward that objective.