Many companies are relying heavily on carbon offsets to reduce their CO2 emissions profile.

But existing offsets can be of poor quality and outdated, making it difficult to measure the benefits they offer.

Efforts are underway to improve the quality of carbon offsets so companies that buy them can make a meaningful contribution to fighting climate change.

To meet ambitious net zero targets, many companies plan to neutralize a large chunk of emissions by buying carbon offsets — credits generated by projects that are reducing carbon emissions elsewhere.

A company aiming for net zero can cut a portion of the greenhouse gas emissions emanating from its own operations. For what it can’t cut, it needs to find another option — such as a forest in South America that will absorb and store the carbon — to help net out those corporate emissions to zero.

Broadly speaking, the idea is that once a company has done what it can to tackle climate change directly, it then can pay someone else to avoid emitting or to remove emissions already present in the atmosphere. Projects like renewable generation and paying a landowner to prevent deforestation avoid emissions, while approaches like reforestation and direct air capture with carbon storage remove emissions. About a quarter of corporate offset demand is currently met by forest-related projects such as reforestation, forest management or preserving an ecosystem that would otherwise have been destroyed.

“Companies need offsets if they want to reduce emissions that they can’t themselves get rid of,” explains Mark Maslin, professor of earth system science at University College London.

It’s a booming business. Growing demand for these instruments could help push today’s annual carbon market, valued at about $400 million, to anywhere from $10 billion and $25 billion by 2030, according to a study by U.K.-based Trove Research. A separate analysis published by McKinsey in January forecast that the global demand for voluntary carbon offsets could increase by a factor of 15 by 2030 and 100 by 2050.

Corporate demand is a big factor here. Since May 2020, more than 2,100 companies have promised through the United Nations’ Race to Zero initiative to reduce their net emissions to zero by 2050 through various methods — by improving manufacturing processes, switching to low-carbon fuels, installing carbon capture technology, buying more wind and solar electricity — and by acquiring carbon offsets.

But because many of the carbon offsets on offer today are outdated, of poor quality or hard to verify, they risk boosting global emissions instead of curtailing them.

Not enough to go around

One of the biggest challenges of carbon offsetting is that there aren’t enough high-quality credits to counteract the massive level of emissions that businesses produce. What’s more, the world has limited capacity to create new ones.

For example, S&P Global Ratings in June 2020 found that capturing CO2 in forests and agricultural soils has the potential to offset less than 50% of annual carbon emissions.

Forest offsets involve a science-based calculation of how much carbon trees can absorb from the atmosphere and store. Soil carbon sequestration, though less developed, is a way of changing agricultural practices so that soils absorb and retain more carbon. 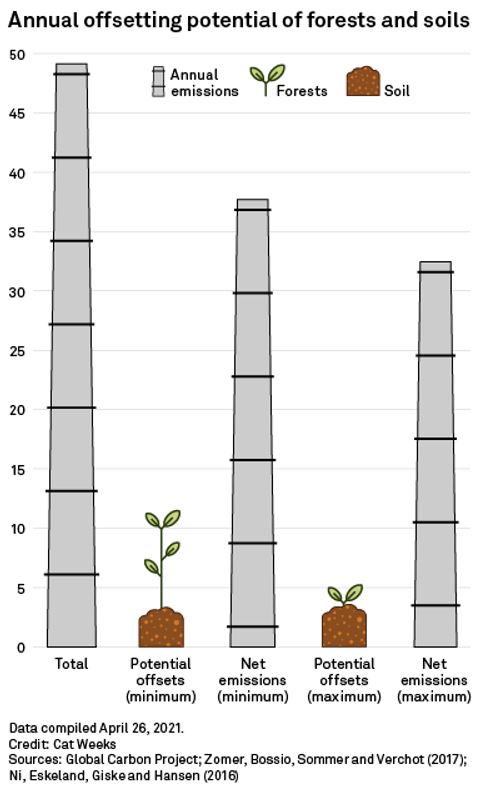 The ‘siren song’ of offsets

Not everyone is a fan of offsets.

“I've talked with enough CEOs who just want to check the box, write a check to a group once a year and [say] ‘I did my part on carbon,’” Kirby said. "We are not going to solve the problem [this way].”

That’s why United Airlines has decided to work on a pilot project aimed at sequestering carbon emissions underground, he said.

Another hurdle is that many companies keen to hit their net zero goals may end up buying outdated offsets (also known as carbon credits) from projects that don’t provide “additionality.” If there is no additionality, that basically means that purchasing offsets does not reduce emissions beyond business-as-usual.

“If the credits being bought are coming from projects that would have been built anyway, those purchases aren’t changing the emissions profile of the world,” says Guy Turner, founder and CEO of Trove and co-author of the study.

The surplus of older credits is significant. According to the Trove research, there is currently a surplus of more than 361 million tons of CO2 equivalent (MtCO2e) in the main voluntary carbon offset registries, representing 2.6 times the overall voluntary and compliance-related demand for carbon offsetting. 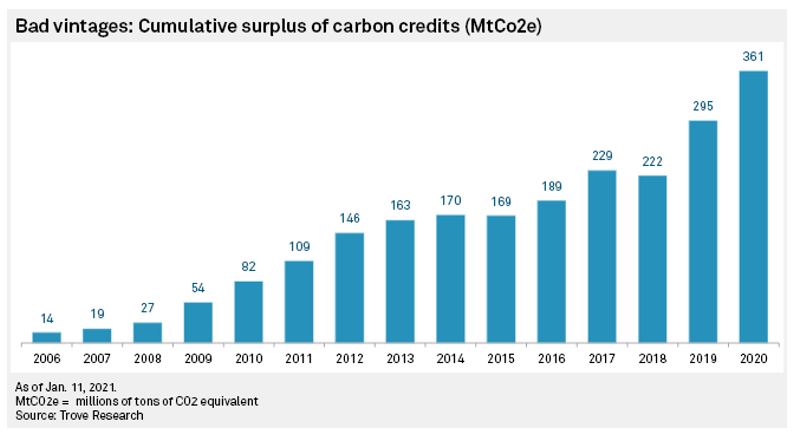 And that total is increasing. In 2020, 60 MtCO2e were added to the surplus. And because projects can back-issue credits, the estimated total surplus in the registries is equivalent to five-to-seven times the current annual demand, according to the Trove data.

“It could undermine the faith and credibility” in the voluntary carbon offset market, said Turner. “And corporates might get twitchy because they come in for criticism for buying older credits.”

“Really good firms will think carefully about which offsets they choose,” said Maslin. “There is a reputational risk” from buying outdated credits.

Where corporations and industries stand

The problem hasn’t gone unnoticed among some corporate buyers. One of the biggest is the Carbon Offsetting and Reduction Scheme for International Aviation, or CORSIA, a system that requires airlines to offset any CO2 emissions above the 2019 base year. To ensure the effort is meaningful, airlines aren’t permitted to purchase carbon credits on projects that commence before 2016.

Recent data suggests that company interest in good quality credits has driven up prices in some markets. For example, CORSIA-eligible credits started the year at 80 cents/mtCO2e, but climbed to $2/mtCO2e by early May, according to data from S&P Global Platts.

Another company concerned about finding high-quality carbon credits is Salesforce. The presence of legacy offsets “makes it a lot harder” to fight climate change, said Max Scher, head of clean energy and carbon programs at the cloud computing company. “We’ve generally steered away from large-scale renewable energy projects that are most suspect about this.” Scher added that Salesforce uses “a lot of additional screens to help weed out lower-tier carbon credits.”

What makes a good carbon credit? The answer isn’t always obvious, especially for older projects. In an interview with S&P Global Platts in February, David Antonioli, CEO of carbon offset registry company Verra, acknowledged that there was a “surplus overhang from historic vintages.” But he noted that awareness about the problem was growing.

"Some people won't want to buy those credits anymore and you'll have a tightening as people focus on newer vintages,” Antonioli said.

A number of initiatives are underway to help companies separate the wheat from the chaff when it comes to picking offsets that are high quality and credible.

The American Forest Foundation and The Nature Conservancy have developed a new Family Forest Carbon Program that aims to solve two problems.

First, it partners with U.S. companies to give families that own parcels of forest the financing they need to maintain that land. That money enables those private forest landowners to take steps that go beyond traditional forest management that will result in those parcels of forest absorbing more carbon than they otherwise would. For example, the landowner may clear away trees that do not readily absorb carbon to enable other types of trees that are better at absorbing the carbon to grow and thrive.

In exchange, the companies backing those projects can claim the additional carbon absorption those forests provide as a way to offset their emissions.

The second problem the program aims to solve is how to accurately measure the amount of additional carbon absorption the forest management efforts provide.

Christine Cadigan, Senior Director of the Family Forest Carbon Program, explained that some other carbon offset programs have traditionally calculated the offset level by using a modeled baseline, which is theoretical and provides no concrete proof that the project is making a difference.

The new modeling tool instead uses U.S. Forest Service’s Forest Inventory and Analysis National Program to compare the parcels that are part of the Family Forest Carbon Program with other forests in the region that are not. The data will show how the health and relative absorption ability of the forests differ over time, with the aim of providing a more concrete comparison than a model.

While the program is in its early days, at least one major corporation has already signed up. Amazon invested $10 million into the Family Forest Carbon program for forest conservation in the Northeastern U.S.

There are groups working to help companies navigate the voluntary carbon market. The World Wildlife Fund, Environmental Defense Fund and European environmental research consultancy Öko-Institut teamed up to work on guidance for buyers, releasing an initial paper that identifies six objectives for measuring the quality of carbon credits.

Carbon offsets "can be a powerful tool if they're done right,” said Alex Hanafi, the Environmental Defense Fund’s Director of Multilateral Climate Strategy, who is working on the guidance project. “If they're not done right, they can actually be detrimental to climate action.”

There are 2 types of carbon offset or carbon credit markets:

One is a mandatory or compliance market regulated by a national, regional or international carbon reduction regime.

An example is California’s cap-and-trade program, which starts with a cap on the total number of emissions companies subject to the program can directly produce annually and then lowers that cap over time with penalties for noncompliance. The goal is to lower total regional emissions over time.

The program splits the total cap on emissions into annual allowances, with each permitting a company to emit one ton of emissions. The program operator then distributes those allowances to companies through a combination of free allocation and by allowing companies to purchase allowances through auctions. The revenues from those auctions are then used by governments to fund low-carbon initiatives such as electrifying public transit vehicles.

Voluntary markets, on the other hand, are not regulated and therefore come with a significant number of additional risks.

Voluntary markets require much more research and legwork by companies if they want to avoid purchasing offsets that provide no additionality.

There are some groups that offer offset certifications. For example, the Washington, D.C.-based nonprofit Verra offers the Verified Carbon Standard. Under that program, projects are issued unique carbon credits known as verified carbon units, or VCUs.

Verra currently has more than 1,280 projects with VCUs in its registry as well as several hundred without. Projects in the registry include renewable energy, forest and wetland conservation and restoration, and transportation efficiency improvements.

Zero in on net zero with unparalleled data and insight from S&P Global Sustainable1.

We’re here to help you accelerate your journey to carbon neutrality. Get connected with an ESG specialist who can advise you on your next steps.


Talk To An Expert