Modest sustainability progress amid continued challenges across Latin America. Companies from the region show a gradual improvement in some aspects of corporate sustainability performance compared to 2018. Overall, however, these modest advances are counter-weighted by sustained weaknesses.

The Latin America Progress Report 2019 presents selected results from the 2019 Corporate Sustainability Assessment (CSA) which includes 124 actively participating companies from Latin America (“LATAM”). It highlights the sustainability challenges and opportunities addressed by companies in each of the following five countries: Brazil, Chile, Colombia, Mexico, and Peru, and across the region as a whole.

A positive sign that companies of LATAM are willing to address and improve their sustainability performance is the increased rate of their participation in the CSA, for a third consecutive year, from 38% in 2018 to 46% of invited companies. Invitations to be assessed in the CSA are issued to the largest companies globally. The CSA provides the research backbone for inclusion in the Dow Jones Sustainability Indices (DJSI).

Although progress appears slow for sustainability management measured by the individual criteria and questions of the CSA, the LATAM region achieved an average Total Sustainability Score (“score”) just marginally ahead of North America once again, which includes Canada as well as the United States. 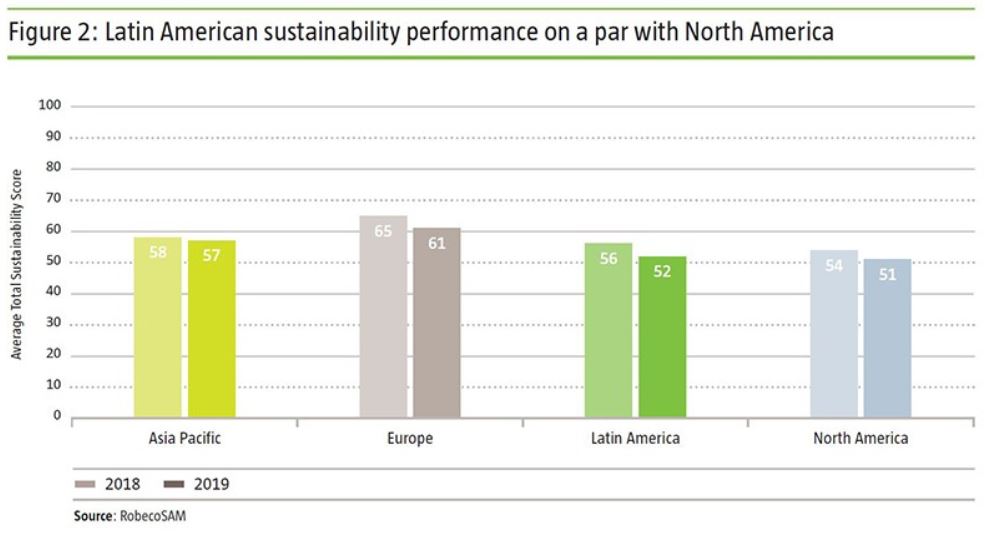 Colombian companies outperforming those of the other LATAM countries is a common theme from this year’s CSA results, continued from 2018 when Colombia had the highest average score of all five countries, as it did again this year. Meanwhile, companies located in Mexico, and in Peru show sustainability performance that is significantly less good for many questions within the three dimensions of the CSA: Economic, Environmental, and Social. 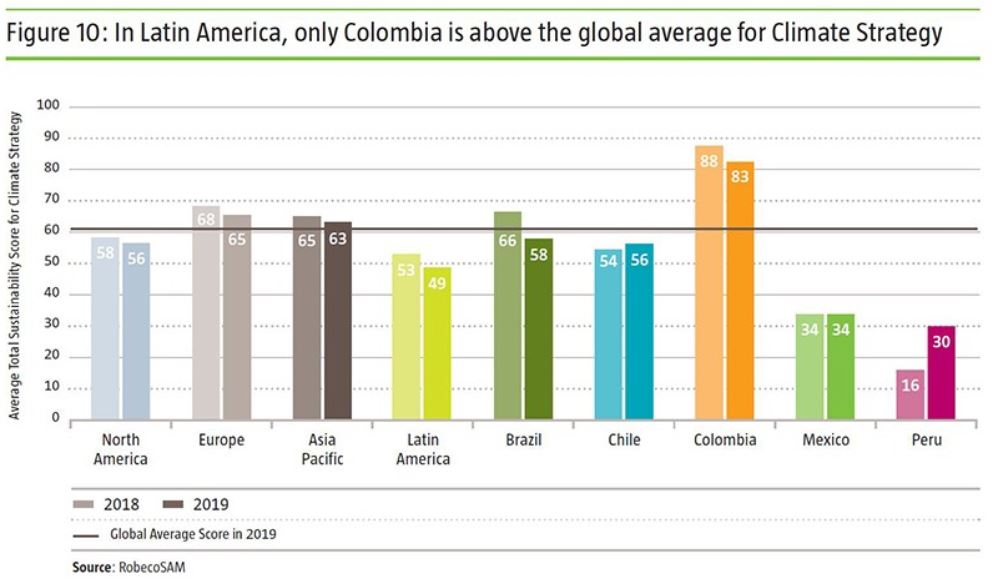 Within the Economic Dimension, the region outperforms the global average for Anti-crime Policy and Measures, Codes of Business Conduct, and Materiality. But for the remaining five general criteria sustainability performance is weaker. Most notable of these is Corporate Governance where LATAM companies perform far below firms in North America and Europe and still some points below peers in Asia.

LATAM companies show the best sustainability performance in the Social Dimension, where for most applicable criteria they keep pace with companies worldwide. For the criterion of Labor Practice Indicators, LATAM scores above both North America and Asia for a second year, demonstrating sustained commitment to selected social responsibility concerns. For each of the questions within this criterion - Diversity in the workforce, Equal Remuneration, and Freedom of Association – LATAM companies exceed the global average.

For overall sustainability management, CSA results point to LATAM companies continuing to lag behind the rest of the world as concluded in the 2018 Progress Report, but to a lesser extent. Evident from the rising participation rate and some stronger scores in certain countries – namely Colombia as well as Brazil and Chile – there is modest progress in the region towards improved sustainability performance, particularly in the Social Dimension and selectively in the Economic Dimension.

LATAM companies however still need to better address several economic and environmental concerns that currently tip the scales towards a comparatively weaker sustainability profile for the region overall.

For those companies unable to provide publicly available evidence of their sustainability policies, processes, metrics, and targets, their potential to score highly has been affected. Additionally, in some of the newer aspects of the 2019 CSA, the adjustment for some participants to fully address the new requirements has been challenging. This highlights the rationale for the CSA process to continue being demanding of companies for transparency of disclosure, as it seeks to drive the advancement of corporate sustainability performance globally.