Regulation is shaping the sustainability agenda and changing the way companies do business in different jurisdictions but keeping pace with constant regulatory updates has become a mammoth task for businesses and investors. In this recurring series, S&P Global Sustainable1 presents key environmental, social and governance regulatory developments and disclosure standards from around the world.

In this month's update, we look at a new climate bill in Australia, updates on the European Parliament’s positions on deforestation and sustainable aviation fuels, and new disclosure guidelines for ESG-related retail funds in Singapore.

European Parliament allows inclusion of gas and nuclear in taxonomy

The European Parliament voted on July 6 not to oppose including gas and nuclear in the EU green taxonomy, a framework for defining sustainable activities. The controversial proposal, which drew criticism from the EU’s expert group, was put forward by the European Commission, the EU’s executive arm, earlier in 2022. The inclusion of gas and nuclear in the taxonomy will apply from Jan. 1, 2023, and will broaden the pool of capital available for new gas and nuclear projects. Some investors have said gas and nuclear should not be viewed as sustainable projects, while others argue nuclear offers a low-carbon energy alternative and gas serves as a bridge fuel in the transition to renewable forms of energy. 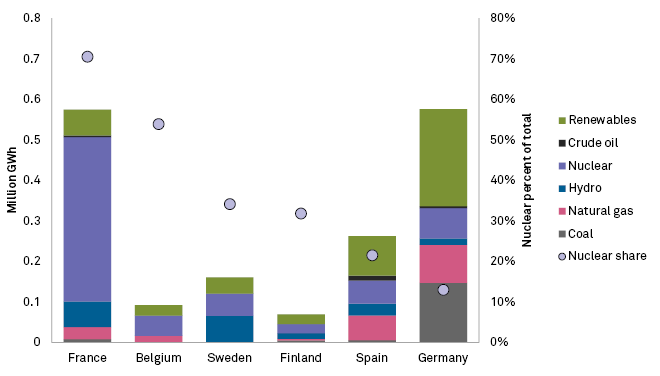 The European Parliament’s Industry, Research and Energy Committee on July 13 voted in favor of raising the target share of renewables in the EU’s energy mix to 45% by 2030 from a previous target of 40% under a revision of the EU’s Renewable Energy Directive. The new target also forms part of the European Commission’s proposed REPowerEU package designed to reduce the EU’s dependency on Russian fossil fuels and increase its renewables output. The committee proposed doubling the number of cross-border projects designed to grow the green electricity market within the EU to two per member state. Countries with the highest annual electricity consumption would have to adopt a third project by 2030. A vote on the committee’s proposals will take place in the European Parliament plenary session between Sept. 12 and Sept. 15.

The European Parliament’s Environment, Public Health and Food Safety Committee on July 12 adopted its position on proposals by the European Commission to require companies to ensure the products they sell in the EU have not been produced in areas suffering from deforestation. The Commission’s proposals would affect the sale of cattle, cocoa, coffee, palm-oil, soya and wood, or products derived from them such as leather, chocolate and furniture. However, members of Parliament want to widen the scope of the regulations to include pork, sheep and goats, poultry, maize and rubber, as well as charcoal and printed paper. They also want to ensure goods are produced according to international human rights law and that the rights of indigenous people are taken into account. The European Parliament is expected to adopt its position in September, and then negotiations will take place with the governments of member states. The Council of the EU, which is made up of the 27 EU member states, adopted its position on the regulation in June.

The European Parliament adopted its position on the European Commission’s proposals to make aviation fuels greener as part of its broad Fit for 55 climate package announced in July 2021. The Fit for 55 plan aims to reduce carbon emissions by 55% compared with 1990 levels by 2030. Parliament said it had raised the targets for the minimum amount of sustainable aviation fuel to be made available at EU airports to 37% in 2040 and 85% from 2050, compared to the Commission’s proposal of 32% and 63%, respectively. It also expanded the proposed definition of sustainable aviation fuels from synthetic fuels or biofuels, which are produced from agricultural or forestry residues, algae, bio-waste or used cooking oil, to include recycled carbon fuels. Parliament also proposed the creation of a Sustainable Aviation Fund, which would speed up the energy transition in the aviation industry and support investment. Parliament will now start negotiations with EU member states, which adopted their position in the Council of the EU in June.

Compliance with voluntary disclosures under the EU’s new Sustainable Finance Disclosure Regulation, or SFDR, varies “significantly” between financial institutions and generally lacks detail, but the situation should change for the 2022 reporting period after new rules apply, EU financial regulators said in a report on July 28. SFDR requirements have been phased in since March 10, 2021, and it requires asset managers, pension funds and insurers to disclose how they consider ESG risks in their investment decisions. One aspect of the regulation requires investment funds to disclose principle adverse impacts, or the negative impacts of investment decisions on sustainability criteria, on their website or to explain why they have not done so. The European Supervisory Authorities, which include the European Securities and Markets Authority, the European Banking Authority and the European Insurance and Occupational Pensions Authority, said that there was a “low level of disclosure” on alignment with the goals of the Paris Agreement, and disclosures that were made were often “vague.” They also said there was a “low level of compliance” on reporting by financial market participants on why they do not take the adverse impact of their investment decisions into account. The supervisory authorities recommended that national regulators conduct regular surveys in their own market to determine whether investment firms are complying with the disclosure regulations.

The Monetary Authority of Singapore on July 28 issued disclosure and reporting guidelines for ESG retail funds that will take effect as of Jan. 1, 2023. Fund managers will have to provide details on the fund’s investment strategy, the metrics used to select investments and the risks related to the fund’s strategy, Managing Director Ravi Menon told a media conference after the guidelines were published. The authority said it would require disclosures to be made on an ongoing basis. Menon said the move would reduce greenwashing risks and help investors have a better understanding of their ESG-related investments.

Fund managers need to improve disclosure of their ESG funds and are currently failing to provide adequate information for investors, New Zealand’s Financial Market Authority said on July 27 following publication of a review of ethical investing. The regulator said it had observed some “blurring of the line” between the disclosure of financial and non-financial factors, making it difficult for investors to understand and compare funds. Descriptions of a fund’s non-financial benefits or objectives were “so high level or subjective as to be of no value,” the regulator said, citing examples from some fund managers who only said their fund would have a “climate impact.” Investors are “overwhelmed by technical jargon,” and generally rely on fund manager websites and marketing to form opinions, the regulator said.

Australia’s new government, elected in May 2022, introduced on July 27 a new climate bill aiming to reduce Australia’s greenhouse gas emissions by 43% by 2030 from 2005 levels and achieve net zero emissions by 2050. The bill requires Australia’s Minister for Climate Change to report annually on progress toward the targets, and that the country’s independent Climate Change Authority will advise the minister. The Authority can also suggest additional 5-year targets after 2030, starting with a 2035 emission reduction goal.

The Reserve Bank of India, the country’s central bank, issued on July 27 draft guidelines to help the banking sector implement a strategy to address climate change risks. Regulators and other stakeholders have until Sept. 30 to respond. The recommendations include creating expert committees at the board level to guide climate-related strategy and ensure the board and senior management understand climate-related risks and to include climate-risk indicators, such as the carbon footprint of a banking lending portfolio and the greenhouse gas emissions of assets, in a bank’s risk management. In a survey of the Indian banking sector conducted in January and released on July 27, the central bank said only a few banks had an ESG strategy in place and were lagging in building up a green finance portfolio.

U.S. President Joe Biden announced on July 20 a series of executive actions on climate change, including the expansion of the offshore wind market. Biden said he will direct the U.S. Department of the Interior to propose its first areas for wind energy development in the Gulf of Mexico. These areas will cover 700,000 acres and could supply power to more than three million homes. Biden also requested that the Secretary of the Interior advance wind power development off the Mid-Atlantic and southeastern U.S. coasts. Under the executive actions, the U.S. Federal Emergency Management Agency announced $2.3 billion in funding to help communities increase their resilience to extreme weather events such as heat waves, drought, wildfires, flood and hurricanes.

Data compiled June 23, 2022.
* Calculated as the sum of prior year’s existing capacity determined through available in-service years and expected new additions.
^ 2030 expected new additions include projects that do not have in-service year available. Projects without in-service year account for 4,250 MW.
Capacities are based on actual state awards where they have been awarded and otherwise reflect lease areas or specific project capacities communicated by the developers.
Source: S&P Global Market Intelligence

Framing the Future for Nature