The European Commission has proposed a new energy independence policy called REPowerEU that would ramp up development of wind and solar power to wean EU nations off Russian fossil fuels.

The proposal aims to double the EU’s solar power capacity and require new buildings to be equipped with solar power.

The plan targets €210 billion in new energy investments, and the Commission estimates cutting Russian fossil fuel imports could save the EU almost €100 billion per year.

The European Commission, the EU’s executive arm, presented in May a plan to increase the roll-out of renewables to counter a spike in energy prices and to drastically reduce the EU’s dependence on Russian supplies of fossil fuels. The REPowerEU plan aims to achieve EU independence from Russian fossil fuels “well before” 2030 and to reduce Russian natural gas imports by nearly two-thirds before the end of 2022, the Commission said. Russia accounted for almost half of the EU’s gas imports in 2021 and is the largest supplier of the bloc’s crude oil and coal imports, according to the Commission.

How does the EU expect to achieve these ambitious targets?

The REPowerEU plan targets an additional €210 billion in investments by 2027 in renewables, hydrogen infrastructure, energy efficiency and imports of liquified natural gas, or LNG. Under the proposal, member states would diversify their gas supplies with LNG and pipeline imports from other suppliers. They would also increase production and imports of biomethane and renewable hydrogen. The plan also seeks to improve energy efficiency in residential, commercial and industrial buildings and speed up the deployment of renewable energy projects.

Full implementation of the Commission’s proposal would reduce annual gas consumption by nearly one-third, or around 100 billion cubic meters, by 2030. The proposal builds on the EU’s broader Fit for 55 climate package, proposed by the Commission in July 2021. That plan includes an array of regulation such as a carbon border levy as well as a reform of the EU’s emissions trading scheme, and it is still going through the EU’s legislative process. REPowerEU aims to raise some targets in the Fit for 55 package, including the EU’s 2030 energy savings target to 13% from 9% and the EU’s 2030 target for renewables’ share of its energy mix to 45% from 40%. The overall goals of a 55% reduction in carbon emissions by 2030 and overall carbon neutrality by 2050 — the key targets of Fit for 55 — remain the same.

How will the plan develop the renewables market?

Developing solar power forms a major part of the plan. The bulk of the €210 billion investment will be earmarked for renewables, with €86 billion for renewables such as solar and wind power, while €27 billion will be spent on hydrogen infrastructure. The proposal aims to double the EU’s newly installed solar photovoltaic capacity to more than 320 gigawatts by 2025 and targets almost 600 GW by 2030. New commercial, public and residential buildings will all be required by law to have solar panels, while an EU Solar Industry Alliance will be created to expand domestic production of panels. 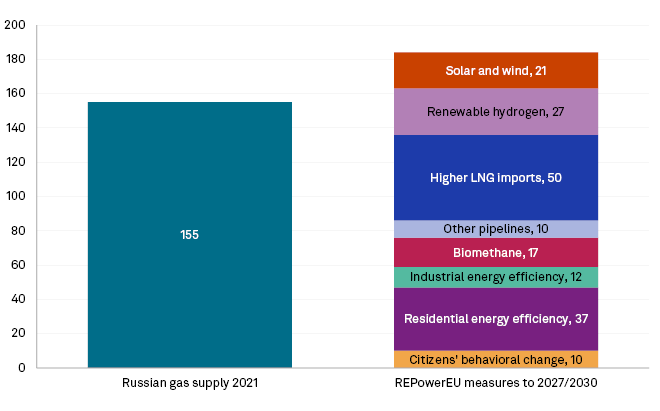 Data as of May 18, 2022.
REPowerEU is the European Commission’s plan to reduce reliance on Russian gas imports. Figures shown for the energy sources in REPowerEU represent the equivalent billion cubic meters of gas per year saved by the plan.
Source: S&P Global Commodity Insights; European Commission

The plan also attempts to address the thorny issue of obtaining permits for wind and solar power projects, which has been a roadblock to the development of renewable energy in the EU. In a working document on the permitting process, the Commission said that while the time it takes to grant a permit varies among EU member states, offshore wind projects can take up to 10 years, onshore wind from three to nine years, and solar power projects from one to more than 4.5 years. The Commission is offering support to member states to accelerate the permitting process, which is a significant move, Elisabetta Cornago, senior research fellow at think tank the Centre for European Reform, told S&P Global Sustainable1 on the ESG Insider podcast. “It's already progress to actually put a finger on this, recognize and say out loud that the permitting has really been an important bottleneck,” she said.

However, it will be up to national governments to change the rules and ease the process of granting permits, Cornago said. Northern European countries that have been rolling out offshore wind projects might take a more aggressive approach to permit reviews, while other countries may take a slower approach, she said. “So there's a bit of a risk there of further fragmentation of European markets in this sense,” she explained in the podcast.

How will the EU pay for these massive investments in renewables?

The Commission estimates that the plan would require a total of €210 billion from now until 2027, via national and EU funding in addition to private sector investment. It also says cutting Russia fossil fuel imports would save almost €100 billion a year. The bulk of the investments will come from unused loans from the EU’s Recovery and Resilience Facility created to protect the economies of member states from the impact of the coronavirus pandemic. Additional money may also be transferred from the EU’s cohesion funds, which support less wealthy EU member states.

The most controversial part of the financial plan is the Commission’s proposal to raise an additional €20 billion by auctioning some of the allowances granted for the EU’s emissions trading system, according to Cornago. The allowances are currently kept in reserve to maintain some stability in Europe’s carbon price, she said. There are, however, concerns that if additional allowances are auctioned, that would drive down the price of carbon in Europe and counter the objectives of REPowerEU, Cornago said.