Norway's crude oil production fell much faster than earlier expected in June, but based on data by IHS Markit Commodities at Sea, crude oil shipments returned closer to normal levels in July. Exports reached an average of 1.33 million b/d in July, around 20% up vs June's levels. Output from Norway remains much higher than a year ago, driven by the addition of the giant Johan Sverdrup oilfield, which started exporting in late October 2019. 350,000 barrels per day have been shipped in July, marginally lower than the previous month. This new field of 2.7 billion barrels has rejuvenated Norway's oil production. It was originally discovered in 2010 but came on stream last year. The country's oil production reached 2.1 million b/d in April, but dropped to 1.54 million b/d in June, below the country's target of 1.73 million b/d set by the Norwegian government. 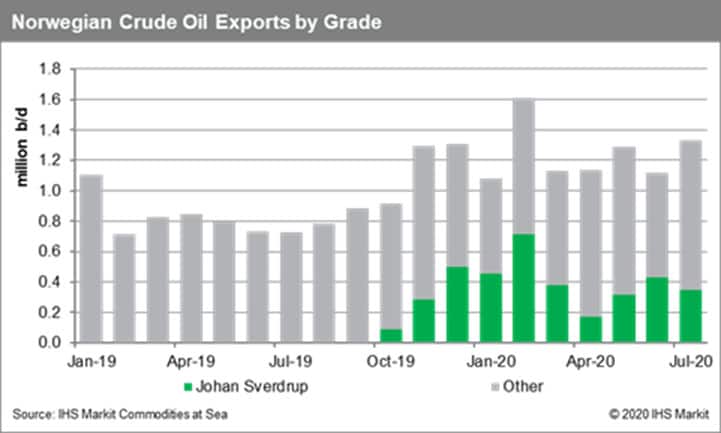 The country's oil income is sharply affected this year due to weak crude oil prices. Europe's largest oil producer (excluding Russia) is heavily exposed to the oil industry, which accounts for about a fifth of the country's revenue. The government has adjusted its forecast for net cash flow from the oil industry to 97.8 billion NOR crowns for this year, down from the October's prediction of 245 billion NOR crowns. 2021 cash flow is expected to only reach 116 billion NOR crowns. Measures taken such as temporary tax relief could boost oil firms' liquidity by as much as 100 billion NOR crowns over next couple of years. Norway agreed to cut its oil output from June until December, by 250,000 barrels a day in June and 134,000 barrels in the second half of the year.

Norway has delayed the start-up of production at several fields until 2021. This means that the country's total production in December 2020 will be around 300,000 barrels less per day lower than originally planned. The cut will include oil fields on the Norwegian Continental Shelf, being well distributed between the fields and different companies involved.

Meanwhile, Neptune Energy recently announced this year's largest oil discovery in Norway, at its Dugong well (PL882) in the North Sea. Estimates suggest volumes in the range of 6.3 - 19.0 million standard cubic meters (MSm3) of recoverable oil equivalent, or 40 - 120 million barrels of oil equivalent (boe). Dugong (PL 882) is located 158 kilometers west of Florø, Norway, at a water depth of 330 meters, very close to operating production facilities. Two reservoirs are involved, at a depth between 3,250 - 3,500 meters. Other new oil discoveries in the country include Aker BP's Liatarnet, at 80 million - 200 million barrels, and Bergknapp by Germany's Wintershall, estimated at 26 million - 97 million boe.

Focusing on North Sea's total crude oil loadings, activity is expected to hit this year's record low in September. Most recent loading schedules suggest exports will drop to 1.61 million b/d in September. This will be the lowest since October 2019. Loadings of the 12 main grades loaded in North Sea are expected to drop 16% compared to August. The decline will primarily be driven by maintenance shutdowns. Johan Sverdrup loadings are not expected to surpass 300,000 barrels per day in September. Only 15 Aframax-sized cargoes of the grade are scheduled to load next month. Loadings of Troll Blend scheduled are around 40% down in September.