World users of soybeans should benefit from a rebound in potential soybean production in 2020.

The main force driving world demand for soybeans is the increase in meat in the world population's diet. China has been the world's largest demand growth country with that country increasing imports of soybeans as China increases its demand for meat. Though the US-China Phase One Trade Agreement is expected to be implemented and result in more US exports of soybeans to China, it likely only could fuel the competition between the world's major soybean exporters (Brazil and Argentina)—making that a major factor given that supply is critical price determinant. 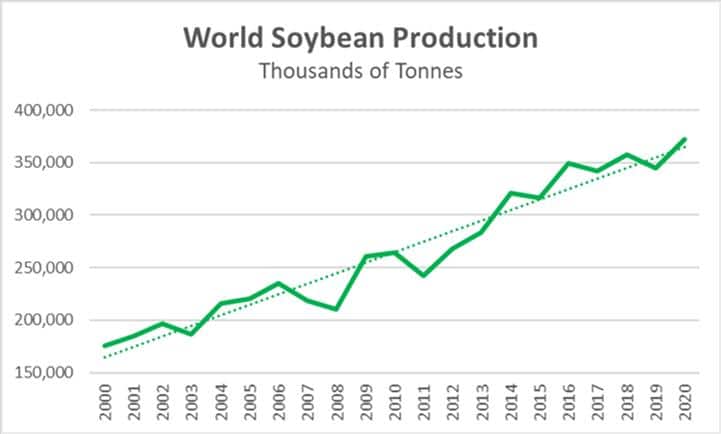 Bulk of World Soybean Production in US, Brazil, Argentina

World soybean production areas are spread across the globe with the bulk of the world's supply originating from three countries: the US, Brazil and Argentina. Last year, for example, soybean production in the US, Brazil and Argentina accounted for about 80 percent of the world's total soybean supply. The availability of the supply is somewhat spread out with Brazil's soybean harvest occurring between January and April, Argentina's harvest between April and June, and the US soybean harvest from September to November.

As of mid March, Brazil's soybean harvest was about half complete with production currently forecast at a level that is above the trend production. Over the past 20 years, Brazil's soybean yield potential has been increasing by an annual average of nearly two percent. However, this season, the yield is expected to increase to a level that is about five percent above the 20-year trend. This primarily is due to favourable weather.

Argentina's soybeans are not yet ready for harvest, however the crop has a production potential that is in line with the trend. Despite the erratic weather during the key yield-determining period that shifted the its production potential from below normal to above normal, the crop potential is back to near trend.

US soybean production potential is expected to sharply rebound in 2020 as plantings are expected to recover from last season's weather-reduced total given the 2019 flooding conditions. US production has the potential to increase about 20 percent. US plantings begin in May and continue into July. Annually, US yields have been increasing about 1.5 percent; however last year, in addition to floods that reduced area, the yields averaged five percent below trend. It will be sometime before actual plantings in the US are known. The first estimate of plantings from the US government is issued at the end of June and production potential will remain in question until October or November. 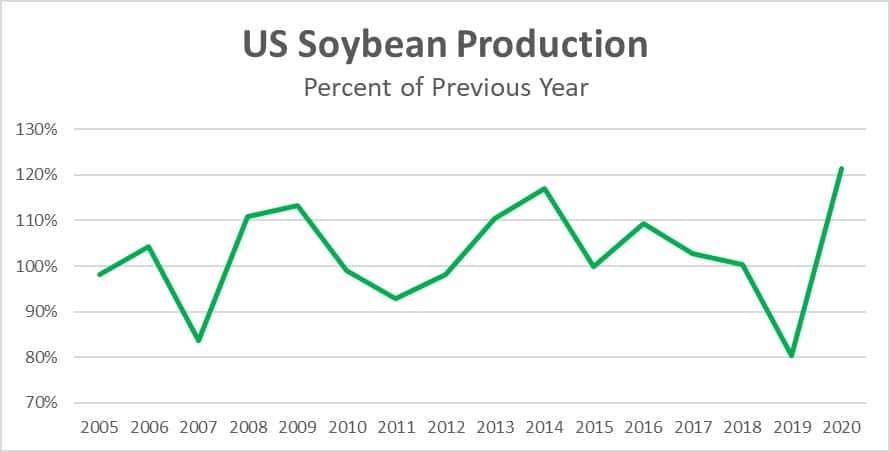 A larger global supply, under normal circumstances, would have a notably depressing effect on future plantings. However, each major producer has factors that favor soybean plantings that could supersede simple economics based simply on prices that drive likely returns versus cost calculation.

It will be difficult for lower prices to reduce the pace of Brazil's soybean planting potential given its ability to produce corn during the same season after it harvests soybeans from the same ground. This practice of double cropping corn following soybeans has been in place for about 20 years and is continuing to grow with 40 percent of this season's soybeans being followed with corn (versus 25 percent 10 years ago). In tonnage terms, a producer expects to harvest just over three tonnes per hectare for soybeans, about eight tonnes for single-crop corn, but double cropping allows the same hectare of land to produce 10 tonnes of these crops per hectare.

In Argentina, soybeans are seen as a way to insulate assets from the nation's unpredictable and often volatile economy. Soybeans in Argentina are dominantly an exportable product that is traded in US dollars, which gives it a safe-haven status compared with its banking system.

In the US, given Brazilian and Argentine reasons and abilities to plant soybeans makes the US-China Phase One Trade Agreement that much more important that it be implemented. To live up to the agreement, China is expected to be a major importer of US soybeans that is expected to keep that crop competitive for land with corn and cotton in future US planting years.

Supply is a key factor influencing prices and should the larger soybean supplies weigh on prices, it will be difficult to markedly discourage plantings in 2021 given Brazil's unique ability to double crop with corn, Argentina's use of the crop as an economic safe haven, and the expectation in the US to gain greater access to China's market with the implementation of the US-China Phase One Trade Agreement.