The bear was—and still is—knocking at the door, although the 6.58% one-week rebound near the end of May (its best week since November 2020) put the trade back, permitting the S&P 500 to (technically) post a gain for May (0.01%). The index played cat and mouse with the bear; it traded at an intraday bear, but never closed there. The chase for weeks down also continued, but failed, though the S&P 500 did post seven consecutive weeks of declines (-14.18% cumulatively), an event that has only occurred four times since 1928, with the last one in March 2001 (-15.53%); the only nine-week decline was in 1923 (note the exchange was open on Saturdays back then). Thanks to the one-week rebound, the index posted a gain of 0.01%, after being down 7.78% (intraday, May 20), while it remained deeply in the red YTD (-13.30%), with strategists reducing target prices faster than oil prices went up at the pump. Economic data quantified significant price increases (CPI 8.3%, PPI 12.0%, Import Prices 12.9%), as housing slowed down (-5.9%, but prices were up 14.8% to a new record), with retail profits falling as consumers pulled back. Worse was the guidance, as companies forecast higher costs and admitted their “limitation” to pass them along (although operating margins remained high for Q1 2022, at 11.97%; the historical average is 8.21%), and the Fed notes said they may need to go beyond neutral (suggesting it could be more than “transitory”). But—and there is always a but—inflation is showing more signs that it has peaked, be it partially due to resistance, which in this case is not futile, but is recessionary. There does seem to be support levels across the market (which may be tested again), companies do appear to be starting up capital expenditures (be them from COVID-19 delays), employment remains high (according to the ADP and Monthly Employment reports), and consumers are still willing to spend—be it on leisure items and travel, which may eventually be reclassified as a one-time relief spending rally from COVID-19 hibernation.

As for the S&P 500, it posted a 0.01% gain after April's -8.80% decline and was down 13.30% YTD, as inflation fears struck individuals and profit concerns struck investors. While “we” all knew the economy would slow, the reality of the event caused selling (with buyers happy to exit as prices declined). The ability of the index to stay above 3,800, which still would keep it at a 2022 17.0 P/E (the current 2022 is P/E is 18.5), with 2022 earnings estimates having a 7.5% increase, spoke to those willing to buy for longer holding periods (with faith in the U.S. dollar averaging down). At this point, more bad news is likely ahead (inflation, interest rates, supply shortages, then supply backups once China opens up), which will test the pockets of those buying and the ability of the bulls to sell the story that inflation and supply issues are at or near their bottom, with the sun (and new highs) coming in 2023. Perhaps for now, anyone wanting to “buy in” needs to have liquidity and the ability to live past more volatility (and potential losses). As for the new risk/reward trade off, dividend stocks appear to have attracted more than the normal income seekers, which has helped those stocks (relatively), but those new investors may not be long term, so when the winds shift to growth, they may add to that selling.

At the root of the S&P 500 drop, up until May 20, was data from retailers that consumers were slowing on spending due to higher prices, and a growing belief that the Fed's interest rate increases would be quicker than expected, with the old 0.50% hikes and a potential 0.75% increase being replaced with 0.75% and a mention of 1.00%. Post-May 20, the index rebounded on more evidence that inflation may have peaked, and the underlying economy was still strong (and rich) enough to support spending (and profitability). 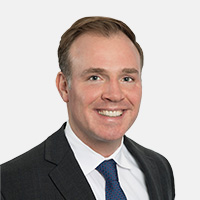 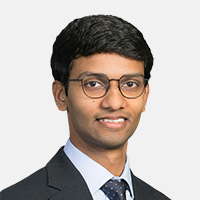 In the first quarter of 2022, there was uncertainty in fixed income markets due to rising inflation and interest rates, the ongoing Russia-Ukraine conflict and slower economic growth prospects following the unwinding of the central bank actions in 2020 to combat the COVID-19 pandemic. In such market conditions, tradable credit indices have yet again shown that they are an effective instrument for navigating credit exposure. We outline the Q1 2022 volumes linked to key iBoxx, iTraxx and CDX indices.

In the following sections, we will examine ETF AUMs linked to key iBoxx credit indices across North America and Europe.

Headline inflation remained hot in April.  The ongoing conflict in Ukraine maintained upward pressure on energy and commodity prices around the world.  The pandemic lockdown in China exacerbated the supply chain bottlenecks, further boosting inflation in many economies.  In the U.S., domestic consumption accelerated at an annualized rate of 2.7% in Q1 2022.  In response, major central banks shifted to a more hawkish stance in their monetary policies to combat inflation.

Asian credit spreads contracted this month, but the rise in interest rates offset gains from the spread tightening.  The USD Asia IG index sank 2.49% with large losses seen in long maturity buckets, while its average credit spread narrowed by 9 bps.  The USD Asia HY index fell 0.91% as its spread shrank by 80 bps.  The CCC-rated segment plunged 7.56%, dragged down by defaults of Sri Lanka government bonds and Chinese real estate issuance. 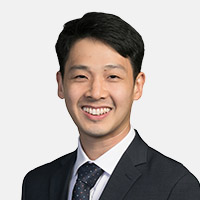 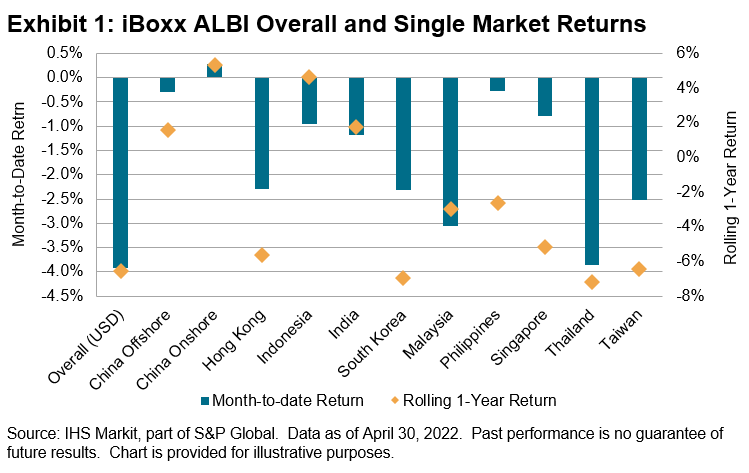 As the Omicron wave of COVID-19 subsided in most parts of the world, border restrictions were either relaxed or removed in a number of countries, and businesses and individuals began to look forward to lives that may somewhat resemble pre-COVID-19 days.  This said, global markets did not have the best month in April due to a slew of reasons—including the ongoing Russia-Ukraine conflict, global supply chain disruptions, tightening COVID-19 restrictions in China and inflationary pressures.

Global equities were down 8.15% (as per the EMIX All World Index).  U.S. Treasuries fared slightly better but still ended the month down 3.23%.  In Asian fixed income, the iBoxx Asian Local Bond Index

(ALBI) (unhedged in USD) was also in the red, losing 3.92%, as all eligible markets except China Onshore (up 0.29%) lost ground.  The worst-performing markets were Thailand (‑3.86%) and Malaysia (‑3.05%).  Apart from China Onshore and the Philippines, all other markets recorded losses (in local currency terms) across the yield curve.  The largest losses were concentrated in the long end.  Of these, Thailand 10+ (-7.12%) and Hong Kong 10+ (-6.97%) were notable.  On the bright side, China Onshore saw modest gains across all maturity bands.

Through April, the overall index yield increased by 26 bps to 3.99%.  Excluding China Onshore (‑1 bp), all other underlying markets saw yield increases, with Hong Kong climbing 56 bps to 3.51%—exceeding 3.5% for the first time since index inception.  India remained the highest-yielding bond market in the index, offering 7.19%, while Singapore (2.79%) was the lowest-yielding market.

Shorter- and longer-term interest rates in developed markets moved higher in April.  The broad increase in rates reflected a progressing inflationary environment stemming from hot headline inflation, the impact of the pandemic and the ongoing Russia-Ukraine conflict.  Global equities declined and fixed income underperformed, as the abrupt lift-off in rates prompted markets to adjust to new valuations. The U.S. dollar surged to a recent high on the back of aggressive U.S. rate hike forecasts, and commodity prices remained at elevated levels supported by supply dislocations.

In Singapore, the MAS raised the core inflation forecast for 2022 and adopted a tighter monetary policy to slow inflation momentum and maintain price stability.  The iBoxx Singapore Dollar (SGD) Overall Index fell 0.76% in April, after the worst monthly loss of -3.03% since inception over the preceding month.

All investment grade (IG) subindices fell in the red, with the A sector registering the best performance and the BBB sector the worst.  In general, SGD IG bonds endured losses across the curve and faced sharp declines in longer-dated maturity buckets.

With lower duration and higher yield, the non-sovereigns sub-index outperformed both the overall index and government subindex.  Temasek and LTA bonds had the longest duration among the worst performers.