"If you can't get on the train, step aside, there's another one right behind it." That automated New York City subway announcement moved to Washington this month, where a "go big" outlook on fiscal stimulus continued. The original USD 1.9 trillion stimulus bill (passed by the House and sent to the Senate) is now expected to total at least USD 1.6 trillion (after the opening Republican offer of USD 618 billion), with another one in the USD 1+ trillion area being worked on. Good thing interest rates are "still" low to cover the debt, wouldn't want to inflate the concern—but note the 10-year U.S. Treasury closed at 1.42%, as the 30-year closed at 2.15%. The impact of the prior stimulus bill was seen in the Weekly Unemployment Report (this month), as the total number of people collecting unemployment in all programs increased 2.6 million to 20.44 million (ending the month at 19.04 million), and the supplementary USD 300 weekly payment was started up again (the expired one had been USD 600). The effect of the stimulus bill was also shown by the 10% increase in Personal Income seen in January. For the market, the two-part harmony of the U.S. Fed and Treasury stimulus and support expanded, as some now saw it as three-part harmony, with the third part being individuals, which had been heard for a while, but they had now continued long enough to be considered part of the band by many. While not everyone agrees on the third part (ask GameStop traders), the two-part harmony seemed strong enough for the short-term, and if you don't fight the Fed you don't short Fed and friends (with the sidebar being that there is not much selling, outside of some IT profit taking, yielding little resistance to the upside). The Street's bottom line was the S&P 500 posting five new closing highs for the month (with six for The Dow®), as the S&P 500 closed above 3,900 for the first time, ending the month shy at 3,811.15 (3,800 was broken on Jan. 7, 2021; 3,700 on Dec. 8, 2020; 3,600 on Nov. 16, 2020). The S&P 500 posted a 2.61% February gain (it was up 5.94% on Feb. 12, 2021), making up for January's 1.11% decline. The index was up 1.47% YTD, up 13.12% from the U.S. Nov. 3, 2020, presidential election, and up 12.55% from the pre-COVID-19 Feb. 19, 2020, closing high (posting 30 new closing highs since then). A warning for the fun and potentially misleading stats for the Feb. 19, 2020, high (3,386.15) through the March 23, 2020, low (2,237.40), when the index declined 33.93%: the change from Feb. 19, 2020, was 12.55%, as the change from March 23, 2020, was 70.34% (personal belief: anyone using these numbers should explain the base, and not just quote a selected stat to support their point—keep your presentation kosher).

The takeaway for the opening month of the year was the same as the takeaway from December (or to some degree, of post-March 2020)—neither virus nor politics nor any fundamentals shall keep the market from its appointed rounds of new highs. However, the takeaway did not include anything about a one-day return of -2.57% or a 1.93% decline from web-based social trades (which raised questions like, "What's the matter with kids today?" or "Why is my boy just like me?") Now delivering those first-class highs were individual investors, fed by optimism, and a new breed of younger investors, who can no longer hang out spending their money (ah, the humanity of the emptiness of the bars). So, aided by "fun" web-trading toys, they are "stimulating" the market (did someone say to read the FT (Financial Times), not the newspaper, but the programs of the Fed and U.S. Treasury?) I should note that it takes a lot of small investors to move the market, compared to the assets of money managers, with a sidebar (of more seasoned observers) pointing out that the participation of so many new investors speaks well to the size (but not necessarily the profitability) of future investors (at least for those that survive) and their eventual inheritance. While the market went on its merry way, the last week of January saw volatility increase (and VIX® jump from 21 to 37 in one day), leaving the week (and month) "bloody, but unbowed." The S&P 500 posted significant declines those two days, resulting in a 3.31% weekly decline, the worst week since October 2020 (-5.64%), and turning the monthly gain into a decline of 1.11%, leaving the index down 3.66% from its Jan. 25, 2021, closing high.

In the volatile first quarter of 2020, U.S. insurance companies invested heavily in Fixed Income ETFs as liquidity dried up in the cash market. In the second quarter, insurers sold off Equity ETFs, but in the third quarter, they returned to buying ETFs, adding over USD 1 billion to their portfolios. While holdings data are not available on a quarterly basis, we were able to analyze ETF transactions. In this analysis, we compare how ETF trading varied between the third quarter and the first half of the year. 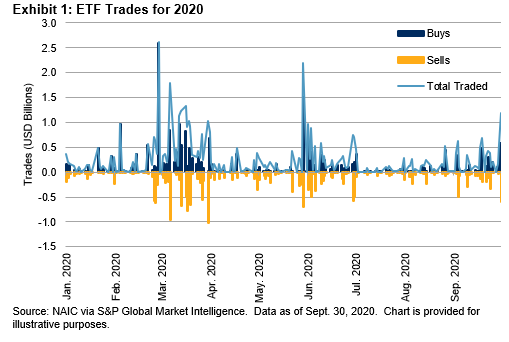 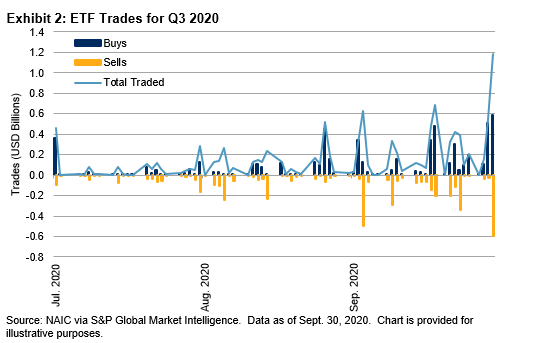 Volatility is often the name of the game in Latin America. While 2020 was no exception, global markets also rode the COVID-19 volatility wave. The global pandemic exacerbated uncertainty around the world and all capital markets were affected, particularly during Q1 2020.

The S&P Latin America BMI experienced the greatest loss (-46.0%) among our major regional indices in 01, followed by the S&P MILA Pacific Alliance Composite (-37.5%), which represents Latin America excluding Brazil. Latin American equities rose in Q2, roughly in line with the global recovery, but then they lagged in Q3. Propelled by global economic optimism following the announcements of vaccine developments, the S&P Latin America BMI topped the leaderboard in Q4, gaining more than 30%, but it was not enough to recoup losses from earlier in the year, as the index finished the year down 12.9%. Similar trends were seen across sectors and countries throughout the year. During the first quarter, all sectors and countries dropped, with Energy and Brazil performing worst. During the subsequent quarters, countries and sectors staged a strong recovery, though some fared better than others—a sign that the pandemic affected some countries and sectors more than others. While Q4 saw impressive returns, with Energy generating the best returns (51.2%), it was the Information Technology (49.2% YTD) and Materials (28.3% YTD) sectors that more consistently contributed to positive performance throughout the year. Materials companies, which include exporters of copper and iron, registered record prices for their exports, since January 2013 for copper and October 2011 for Iron.


Among Latin American countries, all flagship indices ended the year under water when measured in USD. The best performers were the S&P/BVL Peru Select 20% Capped, down 0.4%, and Mexico's S&P/BMV IRT, down 1.8%. The story was different for returns in local currencies, given the significant depreciation of most currencies versus the U.S. dollar during the year. The S&P Brazil BMI in BRL (6.43%), Argentina's S&P MERVAL in ARS (22.9%), and the S&P/BVL Peru Select 20% Capped in PEN (8.8%) rounded up the leaders for YTD returns in local currency.


With the pandemic still raging in many parts of the world, what should we expect in 2021? The good news is that there are two vaccines with high efficacy being distributed in several countries. Currently, only citizens from Brazil, Chile, and Mexico have started to get vaccinated, while remaining Latin American countries are on a long waiting list. Economists in the region are watching the slow and fragile recovery. It is summer in the southern hemisphere, which has helped to curb the number of infections and hopefully by the fall and winter of 2021, the vaccine will have helped control the spread. The key now is how quick and effective the rollout of the vaccines will be in Latin America and the rest of the world before the global economy returns to a strong growth trend. It's going to be an interesting year, yet again.

The pandemic has proven a time to shine for mandates that invest with ESG principles in mind. Fueled by an accelerated appetite for sustainable funds in Asia, Morningstar data for the third quarter of 2020, for example, showed a record high $8.7 billion of net inflows. This helped total ESG fund assets in Asia to reach $25.1 billion, up 75% from the previous quarter.

Investing through an ESG lens has become more common in line with growing evidence that companies with good characteristics are expected to be more resilient during a crisis. Yet it is easier said than done to find relevant investments, integrate ESG in decision making and evaluate different managers and strategies.

To assess the tangible influence of ESG on portfolios and on potential drivers for future engagement, a new survey by AsianInvestor, in collaboration with S&P Dow Jones Indices (S&P DJI), gathered insights from 85 senior investment executives in October and November 2020.