The person-to-person payments space, where names like PayPal Holdings Inc. are dominant, is becoming even more crowded with the launch of a peer-to-peer network in the mobile applications of many of the largest U.S. banks.

The new network, known as Zelle, went live June 12, 2017. It enables fund transfers between bank accounts within minutes using email addresses or mobile phone numbers. Zelle joins the ranks of a number of entrenched services that consumers have grown comfortable utilizing to send money to one another.

In the coming year, Zelle functionality will appear in the individual mobile applications of the more than 30 participating financial institutions. Peter Tapling, chief revenue officer at Early Warning Services LLC, the bank-owned entity behind Zelle, said around 17 to 20 bank and credit union partners will refresh their apps to add Zelle in the next several weeks.

Vining Sparks analyst Marty Mosby said Zelle will bring peer-to-peer payments into the mainstream and allow people to use the service more effectively. He said there will still be "inertia" around services from early-movers in the space like PayPal and Venmo Inc. PayPal Holdings acquired Venmo as part of its $800 million acquisition of payment processing startup Braintree in late 2013.

At its developer conference June 5, Apple Inc. said the iOS 11 Apple Pay platform, to be launched in the fall, will feature a person-to-person payment option.

"We expected that announcement from Apple last year at their developer conference," said Bernstein analyst Lisa Ellis. "So they're sort of late to the party."

In late January and early February, S&P Global Market Intelligence surveyed 504 individuals in the U.S. who had used mobile payment apps in the past 30 days, along with 400 individuals who had not done so. PayPal was the most popular service for sending or receiving money, followed by bank-specific mobile apps. Facebook Inc.'s Messenger app and Square Inc.'s Square Cash were also popular, but they trailed Google Inc.'s Google Wallet and Venmo. 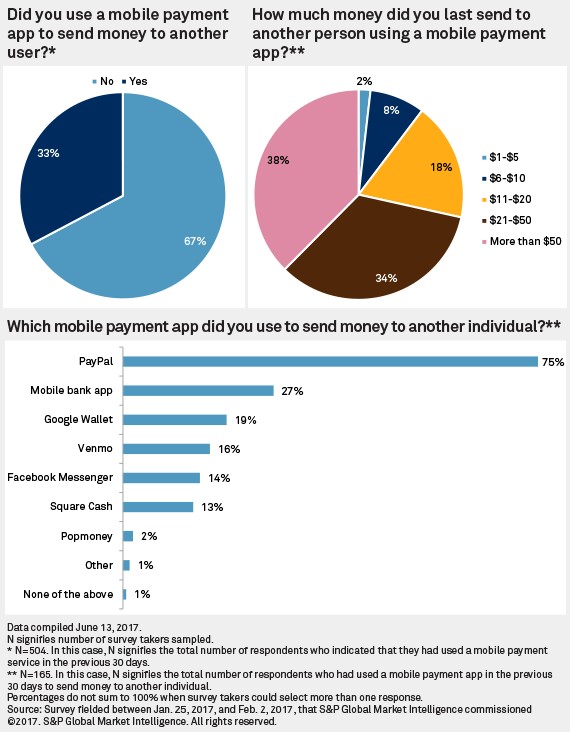 Unlike some other peer-to-peer options, Zelle offers real-time fund availability, which is powered by a contractual obligation among the partner banks that requires them to move funds immediately. Transactions might clear later that day, but users should see money arrive in their accounts within five minutes or less, Tapling added. Zelle was built over a legacy payment structure, and most transactions clear over the existing Automated Clearing House payment rails, he explained. Since 2009, banks have offered their own individually branded peer-to-peer services on top of the clearXchange network.

Now the network has become available to 86 million U.S. mobile banking customers. According to data from Early Warning Services LLC, Zelle processed a network volume of $16 billion and completed 51 million transactions in the first quarter. Those figures represent clearXchange customers who will be live on Zelle in the next few weeks, Tapling said.

As of June 12, PayPal said it has more than 203 million active customers. The company's PayPal, Venmo and Xoom services processed $64 billion in total peer-to-peer payment volume in 2016. On its own, Venmo processed $6.8 billion in the first quarter and $17.6 billion in full year 2016.

"We welcome any development that helps people address the awkwardness of dealing with cash when paying friends or family back," a PayPal spokesperson said in an emailed statement. "We have multiple services to make that easy, including PayPal, Venmo, and Xoom, which work across multiple devices, operating systems, and financial institutions. Millions of our customers have been using their smartphones to send money for years, and the news that more financial institutions and companies will be introducing similar services will only help to increase digital payments.”

Credit Suisse analyst Paul Condra does not see Zelle as much of a disruption for rival services like Venmo.

"The [peer-to-peer] space is growing very fast, so you have other players that will grow and it doesn't necessarily mean Venmo will lose share," he said.

Condra said Zelle seems focused on a slightly different use case than its peers. It may be aimed at larger transactions like a parent lending money to a child or businesses conducting transactions, he said.

The S&P Global Market Intelligence mobile payments survey found that about 72% of outgoing peer-to-peer transactions involved amounts exceeding $20. Mobile bank app customers were slightly more likely than PayPal users to send more than $50, although Venmo exceeded both bank apps and the PayPal service in that regard, according to the survey results.

Ellis said Zelle may be a long-term concern for PayPal and Venmo because peer-to-peer payments are increasingly commoditized. That means they are becoming core services within bank mobile applications and social message services.