Based on their community focus and essential local news, U.S. TV stations could see advertising rebound in the second half of 2020 as states and municipalities reopen businesses and political campaigns boost their ad spend.

Based on their community focus and essential local news, U.S. TV stations could see advertising rebound in the second half of 2020 as states and municipalities reopen businesses and political campaigns boost their ad spend.

While the COVID-19 crisis could have a more profound impact on revenue than the last recession of 2008-2009, the U.S. TV station industry has shown resilience amid downturns in the U.S. economy. Going into this current health crisis, most large to midsized TV station groups were on solid financial footing. This has allowed broadcasters to be creative and nimble during the crisis when the call came to serve their communities with volunteerism, charity and essential local news.

However, disruptors in the form of lower-cost, new direct-to-consumer streaming options that bypass legacy linear TV, such as Disney+, Peacock and HBO Max, as well as limited-ad or ad-free OTT platforms like Pluto TV, pull viewers away from traditional pay TV bundles and retrans fees away from local TV stations. TV stations will need to continue to innovate through their own over-the-top and mobile initiatives like Sinclair Broadcast Group Inc.'s STIRR platform and nationwide rollout of Next Gen TV broadcast signals. 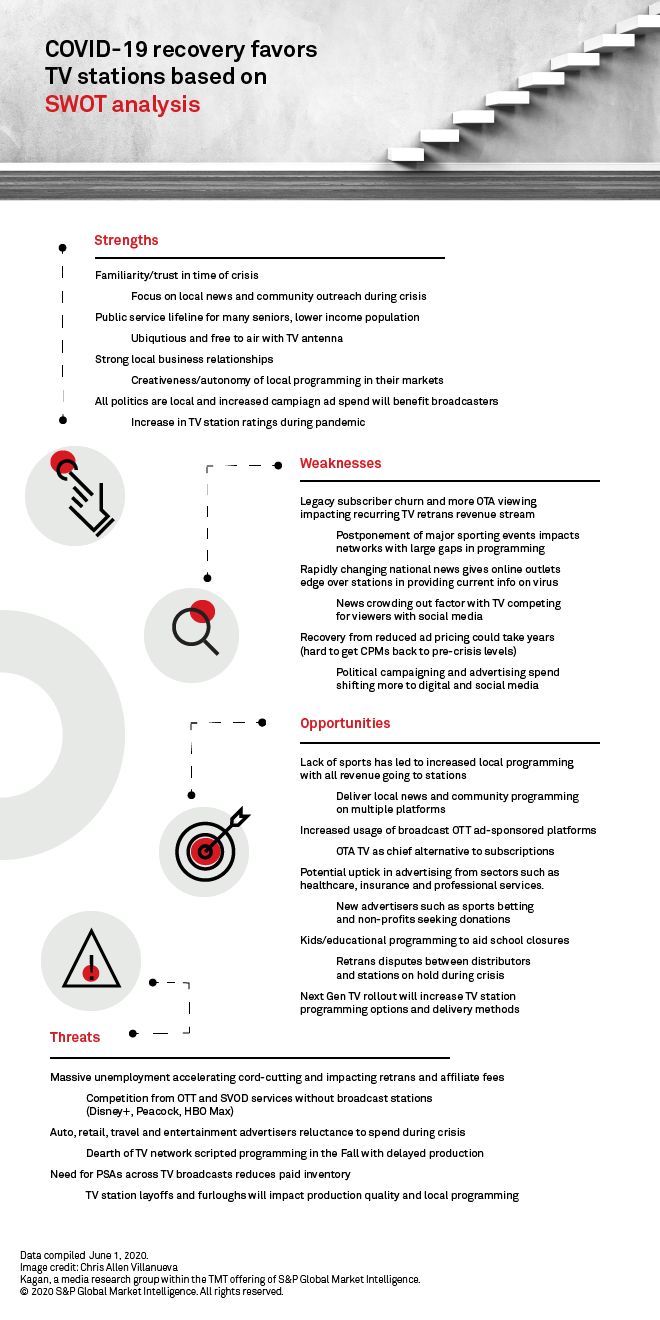 TV stations have seen major declines in core advertising in the second quarter, with core revenues down 30%, 40% or 50% in some cases. However, green shoots are appearing as local businesses reopen in areas that have lifted shelter-in-place restrictions. Sports like golf and NASCAR have restarted and the MLB, NBA and NHL are in negotiations for resuming play sometime in July. A big concern for CBS, FOX and NBC TV stations is whether NFL games will resume as scheduled in September, with NFL representing a major draw that brings in advertising in the second half of the year.

On political, the limitations of campaigning during the pandemic initially dampened advertising spend, although the added factors of civil unrest and brutal partisan politicking have made it even more important for the presidential, congressional and local campaigns to put out their own messages to influence the November elections.

Political advertising on TV might exceed our initial $3 billion estimate if former candidate Michael Bloomberg and Democratic-leaning super PACs flood the airwaves with pro-Biden and anti-Trump ads, and GOP supporters and Trump's reelection campaign have to fend off and put out their own messaging in retaliation. TV ads may even be more important for Trump in this election, given he is not receiving earned media at campaign rallies and is having a feud with his preferred medium, Twitter Inc.

The key to the recovery for local TV stations is flexibility in operating in the new environment and the ability to pivot quickly to advertisers' needs, whether for a store grand reopening, promoting a new pickup or home delivery service, or community outreach to build brand awareness and goodwill during the pandemic. In these difficult times for all local businesses, broadcasters have continued to operate and provide essential services during the shelter-in-place orders. The sector will remain on the front lines during the reopening phase across the country.