Jun. 19 2018 — In a show of hands, cable network programmers were the clear majority in attendance at the Streaming Brasil 2018 conference, held in São Paulo on Monday, June 11. Indeed, in Brazil and throughout Latin America, these traditional multichannel players have led the way in the expansion of streaming offers, being the first to invest in TV Everywhere platforms, which are increasingly becoming available to nonpay TV subscribers through partnerships with ISPs, mobile carriers, streaming aggregators and app stores.

Drawing from years of experience in content curation, programmers are testing the waters for the opportunities provided by new online distribution platforms. The aim is to increase direct contact with consumers and learn more about their viewing habits, as well as extend the shelf life of their licensed content, exploiting multiple windows beyond the limits of linear channel schedules, and to increase brand engagement with fans through interactive content. This way, programmers hope to better compete with online players for advertising dollars.

Speaking at the event, representatives from Turner, Viacom and Globo made sure to point out the value of maintaining their existing relationships with operators. "We still believe in the pay TV model and do not want to prioritize digital at the expense of pay TV, and that is why multichannel operators continue to be our main partners," said Bianca Maksoud, head of sports marketing and distribution at Grupo Globo.

The company, however, is exploring different distribution models and how to best match them to each type of content and viewing window. Globo's catch-up TV service, Globo Play, provides paying subscribers with early access to the broadcaster's series, some of which go on to air months later. In May 2018, Globosat launched its first direct-to-consumer offering, allowing nonpay TV users to subscribe to the TV Everywhere platform for its UFC premium channel Combate. 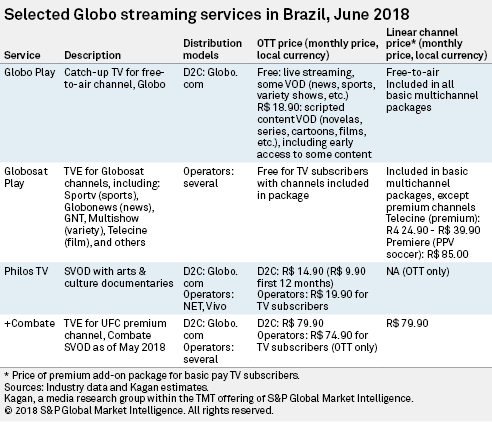 According to Maksoud, these online services allow the company to gain consumer knowledge that was previously limited to operators. However, she pointed out that this was only possible as Globo's licensing agreement with UFC allowed for this type of model, indicating that it would be difficult to replicate for the company's other channels with multiple content sources.

But for fellow programmers that are not part of Brazil's largest media conglomerate and therefore unable to leverage that amount of existing customer service infrastructure, this approach is less simple. Operator partnerships are key. Both Turner and Viacom denied any plans to offer their content direct-to-consumer, or D2C, in Brazil, preferring to work together with operators to explore new distribution models.

Turner Brazil Vice President Anthony Doyle cited the success of a recent partnership with cable operator NET to premiere a new TV show on video on demand first through the operator's NET NOW service before broadcasting on the linear channel TNT Series. "We had the stacking rights for VOD distribution for 'Rua Augusta' and that allowed us to experiment," he said. The company also distributes its Esporte Interativo sports content to nonpay TV subscribers through bundling partnerships with ISPs and wireless carriers. 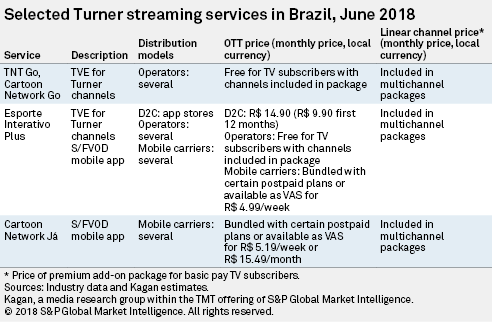 Similarly, Viacom has been partnering with wireless carriers to distribute its Nick Jr. branded kids’ content through the mobile app Noggin. The app leverages second-window opportunities for Viacom's content — first window-priorities continue to lie with the linear channel — and increases engagement through games and by reaching their target audience on the devices they most spend time on after TV. According to Rogério Francis, senior director for content distribution at Viacom Brazil, while 97% of children watch TV, 70% use smartphones and 68% use tablets.

Traditional TV players are not the only ones testing new distribution models. New platforms may even threaten what has long been considered linear television's last stronghold in times of cord cutting — live events. This was made clear by Twitter's sports partnerships director Pitter Rodriguez, who presented the social network's recent successes in livestreaming events such as sports and award shows.

According to Rodriguez, the company totaled 135 million live transmissions in 2017, attracting advertisers such as Gatorade and Caixa, a Brazilian state bank, to sponsor the events. Even events considered niche, with no coverage from linear channels — such as the Brazilian Basketball league and the Women's Copa America soccer championship — attracted sizable and engaged audiences on Twitter.

Globo's Maksoud conceded that the media group often acquires the rights for niche sports content that gets sidelined because there's no space for them in the company's linear programming. Streaming is, therefore, becoming an increasingly attractive solution for live events, and not just niche events, as evidenced by Amazon's recent acquisitions of major sports content such as the NFL and the English Premier League.

Regulatory uncertainty —
Regulation was a recurring topic during the conference, with lawyers taking part in most panels to help clear up the country's confusing regulatory framework of taxes and fees for traditional video services as well as the proposals currently in discussion for over-the-top regulation.

For Fernando Magalhães, director of programming for America Movil's Brazilian multichannel operations, greater flexibility will be key: "Charging taxes and fees per transaction may work for platforms such as Netflix or NET NOW. But if we were to build a bundle with three channels for broadband subscribers, for instance, that model wouldn't be viable. The high tax value would prohibit the investment." America Movil is Brazil's largest pay TV player, owning cable provider NET (Claro Brasil) and DTH service Claro TV Brasil.

While in Argentina, operator Telecom Argentina prepares to launch its TV Everywhere platform Flow to nonpay TV subscribers later this year, in Brazil operators are reticent to adopt OTT business models fully, citing regulatory uncertainty as the main barrier. This is especially concerning to Brazilian operators as — unlike Argentina and most other Latin American markets — Brazil's multichannel subscriber base has been shrinking steadily since 2015. 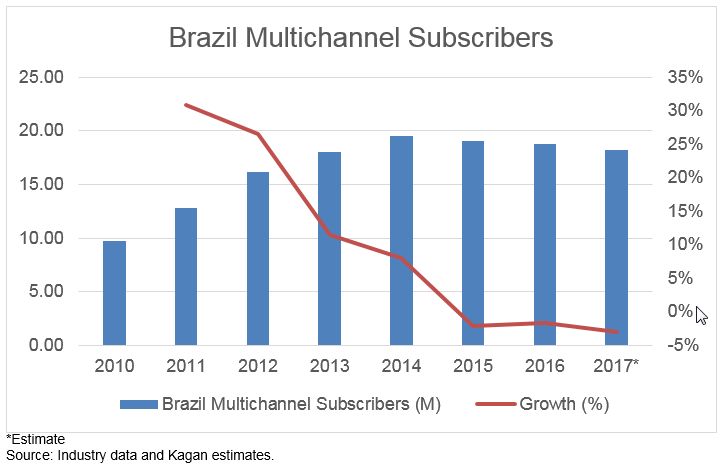 In this scenario, a virtual model similar to DIRECTV NOW and Sling in the U.S. could help multichannel operators sustain long-term growth, as well as reach new fixed and mobile broadband customers currently not covered by their own physical networks.