As the coronavirus pandemic has intensified across the U.S., governors, regulators and utilities have taken swift action to preserve universal service through mandatory or voluntary moratoriums on service terminations during the crisis. Answers regarding how the lost revenue, as well as any increased operation and maintenance costs to keep the service flowing, have received less immediate attention.

As of March 16, Regulatory Research Associates, a group within S&P Global Market Intelligence, had reported that seven states had mandatory prohibitions on service disconnections in place, while in 20 of the jurisdictions covered by RRA, one or more utilities had voluntarily announced they would temporarily refrain from shutting customers off for nonpayment. 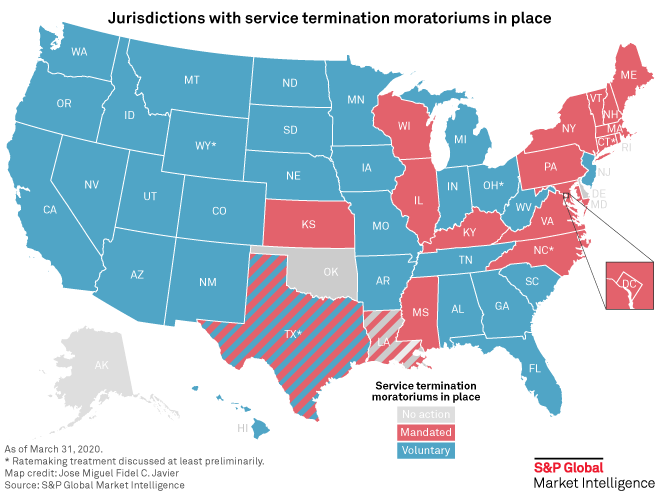 With public health and safety and maintaining universal service the top priorities, regulators in five of these states have begun to provide some guidance or make some provision for ratemaking treatment to address increased costs and/or lost revenue associated with the pandemic and the cessation of shut-offs.

The Connecticut Public Utilities Regulatory Authority, after having ordered a moratorium on shut-offs March 12, on March 18 ordered regulated gas, electric and water utilities to maintain a record of all costs incurred and revenues lost as a result of implementing the required emergency measures and permitting the establishment of a regulatory asset to track incurred costs.

On March 26, the Public Utility Commission of Texas issued a series of orders that, in addition to preventing service terminations by retail electric providers within the Electric Reliability Council Of Texas Inc., establishes a funding mechanism for the associated lost revenue. The orders also allow the transmission and distribution utilities and vertically integrated utilities in the state to establish regulatory assets for the related costs and lost revenues.

An order issued by the Wyoming Public Service Commission on March 26 acknowledges that the utilities have voluntarily instituted temporary moratoriums on service terminations and allows the utilities to seek an accounting order to defer any related costs and lost revenues.

This is similar to the treatment that has been accorded costs arising from severe weather events such as named hurricanes, so precedent does exist within utility case law, with the accrued regulatory assets generally recovered over a period of five to seven years or through securitization.

By contrast, orders issued by the Public Utilities Commission of Ohio and the North Carolina Utilities Commission state that the prohibitions on shut-offs do not eliminate any payment obligation on the part of customers, implying that the utilities would be able to recoup the forgone revenue on a customer-specific basis through an extended payment plan of some kind. Presumably, details concerning the time period for recovery and whether carrying charges would be applied will be addressed at a later date.

Notably, while data has not been aggregated on a systematic basis, some of the utilities that voluntarily ceased service terminations have indicated that they plan to take this type of approach; RRA believes that regulators would ultimately have to sign off on the specifics.

While ratemaking treatment for the costs associated with the coronavirus was not addressed, the Kentucky Public Service Commission issued an order March 17 opening a proceeding to address issues related to the crisis, and presumably ratemaking issues will eventually be addressed therein.

In certain states for some or all of the companies, full revenue decoupling mechanisms are in place that may allow the companies to begin addressing the impacts on a more expedited basis. For additional detail on adjustment clauses nationwide, refer to the RRA Topical Special Report "Adjustment Clauses — A State-by-State Overview."

Similarly, companies that have been permitted to use a straight-fixed variable rate design, under which all fixed costs of providing service, including a return on investment, are recovered through the fixed monthly customer charge and only marginal costs are recovered through volumetric charges, would be insulated from any reduced usage the companies experience due to the coronavirus outbreak. These types of mechanisms are used only in Georgia, North Dakota and Ohio, and then only for gas utilities. 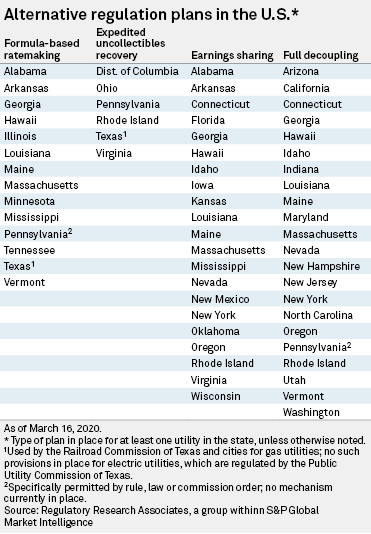 Utilities with broader-based alternative regulation plans, such as formula-based ratemaking and/or earnings sharing plans, may also be somewhat insulated from the impacts of the pandemic.

Under formula-based ratemaking plans, baseline rates are generally set as part of a base rate case where an authorized equity return target is established. The plans allow utilities to adjust rates periodically to address changes in operating costs and investment without adjudicating a full rate case. These plans generally contain a true-up mechanism designed to keep the company's earnings within a preestablished band around the authorized ROE. So, by definition, the plans would implicitly reflect increased employee and other costs associated with the outbreak as well as lost revenue associated with declining usage and increases in bad debt.

The plans may include limits on the percentage that rates can increase in any given year, and cost increases or sales declines that would cause rates to rise by more than the benchmark would be deferred. Nonetheless, there would be a greater opportunity for timely recognition of pandemic-related impacts than can generally be accomplished via traditional ratemaking.

As noted in other recently issued articles by RRA, the pandemic is having myriad procedural and policymaking impacts as there have been delays in elections in certain states, delays are occurring in rate cases and other pending proceedings due to social distancing requirements and state legislatures are adjourning early or suspending their sessions for similar reasons, effectively stranding pending legislation in a year when there has been a significant amount of energy-related legislation on the agenda.