Precipitous Decline In Case Filings Suggests Some Requests Have Been Withheld


Precipitous Decline In Case Filings Suggests Some Requests Have Been Withheld

Every domestic industry has been impacted by COVID-19 in recent weeks. The electric and natural gas utility sector is no exception.

In the four weeks ended April 10, there were five rate proceedings initiated in the U.S. This figure is a stark contrast to the number of case filings that were submitted during the same period in each of the previous nine years, as shown below, according to data from Regulatory Research Associates, a group within S&P Global Market Intelligence. There were 21 rate filings submitted during the comparable period in 2019.

The case filing data compiled from the past four weeks are a clear anomaly and imply that logistical constraints associated with many organizations' transitions to remote operations could be a factor that led to the sharp drop in filing activity. 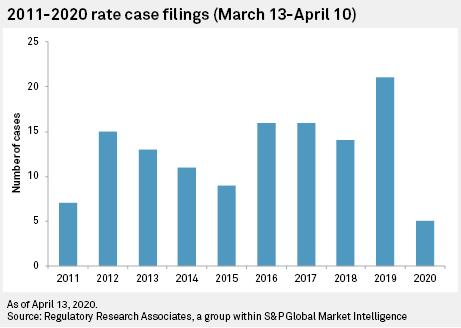 The busiest time for rate case filings tends to be in the late spring or early summer, with the least activity seen in the fall. By contrast, the fourth quarter is generally the busiest time of year for rate case decisions, particularly in December. According to RRA, nearly two dozen other rate proceedings could be submitted by the end of the year.

Many jurisdictions require notices of intent to be submitted prior to formal rate case applications. However, in other jurisdictions no such notice is required and often filing plans are not publicly disclosed. In these circumstances, industry stakeholders typically look to utility investor presentations for anticipated case filing time frames.

In March, when COVID-19 led many businesses to shutter or impose unprecedented changes on their operations, RRA provided details regarding the initial measures taken by some commissions and utilities in response to the situation. RRA subsequently gave an assessment of certain pending rate proceedings that had been delayed to that point and later released additional details, reflecting data available at the time.

In its preview of April regulatory events, RRA drew attention to key developments that were expected to occur during the month, including possible rate case filings that were expected at the time. Several base rate change applications were expected to be filed during April, but RRA later said the current state of affairs has the potential to impede the filing of some of these applications. Although uncertainty remains, several prominent utilities appear to still be readying case filings over the next few weeks, as discussed below.

Possible case filings in April and May

Illinois — Exelon Corp. subsidiary Commonwealth Edison Co. is required to tender its annual formula rate plan, or FRP, proceeding for its electric distribution business by mid-April. ComEd's previous FRP proceeding, Docket No. 19-0387, was decided in December 2019, when the Illinois Commerce Commission ordered a modest revenue requirement reduction be implemented based on an 8.91% ROE.

Kentucky — Atmos Energy Corp. said in February that the company intends to file a gas distribution base rate case as soon as April. The company's most recent Kentucky-jurisdictional base rate proceeding, Case No. 2018-00281, concluded in May 2019, when the Kentucky Public Service Commission ordered Atmos to implement a slight rate reduction based on a 9.65% ROE.

Missouri — Summit Natural Gas of Missouri, Inc. notified the Missouri Public Service Commission on Jan. 30 that it planned to file a gas distribution base rate request in Case No. GR-2020-0213. However, as of this writing, no such filing has been submitted. Utilities in Missouri seeking to increase rates must file tariffs 60 days prior to the proposed effective date. The most recent base rate proceeding for Summit Natural Gas, a subsidiary of Summit Utilities Inc., was completed in 2014, when the PSC established a 10.8% ROE.

Nebraska — Black Hills Gas Distribution LLC has indicated that a gas distribution rate case could be filed in April. The company, which is a subsidiary of Black Hills Corp., last completed a base rate proceeding in 2012, at which time a 9.6% ROE was established.

South Carolina — Dominion Energy Inc. subsidiary Dominion Energy South Carolina Inc., or DESC, recently requested Public Service Comm. of South Carolina permission to delay a required May 1 case filing deadline until at least Aug. 15. The case was required in accordance with the terms of the PSC's 2018 approval of Dominion's acquisition of SCANA Corp. The test year to be used in the case was the 12 months ended Dec. 31, 2019, updated for known and measurable changes through Sept. 30, 2020. New rates were contemplated to be implemented in January 2021. DESC said it would utilize this test year in the eventual case filing if the commission approves use of an updated test period ended Nov. 30, 2020. If approved by the PSC, new rates would not take effect until at least March 8, 2021. DESC's last base rate case, Docket No. 2012-218-E, was decided in 2012, when a 10.25% ROE was established.

Utah — PacifiCorp anticipates filing an electric rate case in early-May. PacifiCorp's last rate proceeding in Utah, Docket No. 13-035-184, was decided in 2014, when the Public Service Commission of Utah adopted a settlement that allowed the company to implement a rate hike based on a 9.8% ROE.

Virginia — Virginia Electric and Power Co., or VEPCO, a subsidiary of Dominion Energy Inc., had intended to file on April 1 for an update under Rider U, which pertains to its initiative to underground at-risk distribution lines. However, on April 1, the Virginia State Corporation Commission approved VEPCO's motion to delay the filing until June 1. In so doing, the commission extended the effectiveness of the existing rider revenue requirement through March 31, 2021. The most recent update to Rider U became effective in November 2019, when VEPCO implemented an $18 million revenue requirement decrease, resulting in an annual Rider U revenue requirement of $51.5 million.

VEPCO is expected to file annual updates to several other key riders in May, namely Rider B, Rider GV, Rider R, Rider S and Rider W.

Wisconsin — Alliant Energy Corp. subsidiary Wisconsin Power and Light Co., or WP&L, is planning to request electric and gas base rate changes in the near future. WP&L's most recent base rate proceedings were resolved in 2018, when the Public Service Commission of Wisconsin issued an order approving a settlement freezing electric and gas base rates for 2019 and 2020. Any rate adjustment approved in the upcoming rate cases for the company would ultimately take effect in 2021.