The National Association of Insurance Commissioners (NAIC) regularly updates its regulations. In 2020, the NAIC proposed a more granular set of designations for bonds. The proposed regulations expanded the number of designations from 6 to 20. These proposed designations align closely with the ratings provided by nationally recognized statistical ratings organizations, such as S&P Global Ratings (see Exhibit 1). The proposed expanded factors also add more transparency to the varying degrees of risk within insurers' fixed income securities. 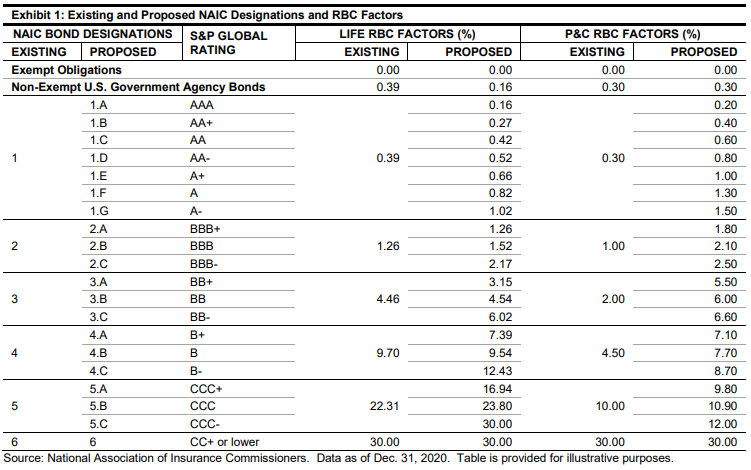 The Life industry has been the primary focus of the 20-designation project, given the contribution bond risk to Life insurers' overall RBC profile. Within individual designations, the impact of the proposed factors would be broad. The reduction in AAA/Fannie/Freddie RBC charge would lower the industry level charge by 60%. At the other end, the increase in the NAIC 1.G factor would increase this capital charge by 160% (see Exhibit 2). Overall, the after-tax C-1o charge would only increase by 11.25%—from USD 55.6 billion to USD 61.9 billion. However, the ACL ratio would decrease by 37.3%—from 970.89% to 933.59%. Although the overall impact on industry-level RBC ratios is not material, scenarios at the individual company level could cause the changes to be more than superficial in certain instances.