A tool previously used by state insurance regulators to give insurance companies and their investment portfolios time to bounce back from severe dislocation in financial markets could become a temporary source of billions of dollars of relief to the extent fallout from the COVID-19 pandemic persists.

While U.S. life industry capital and surplus ended 2019 at an all-time high of $422.18 billion when incorporating group-level consolidations and $501.46 billion when excluding them, many of the same investment-related factors that weighed on capitalization during the 2008 financial crisis are all but certain to pressure results for the first quarter of 2020 and, quite possibly, the full calendar year. The potential for excess mortality related to COVID-19 presents an additional risk factor to the 2020 outlook.

Insurers can request regulatory approval to use permitted practices, which are an accounting methodology for specific assets and liabilities that deviates from the National Association of Insurance Commissioners' statutory accounting principles and the principles prescribed by insurance codes in some companies' domiciliary states. The U.S. life insurance industry used permitted practices in year-end 2008 statutory statements as companies sought to mitigate what otherwise would have represented significant pressure on capital and surplus and, in turn, risk-based capital ratios.

"There have been situations where an insurer would be able to maintain operations for 20 years, but to date, since liabilities barely exceed assets based on [statutory accounting], the insurer is nearly or technically insolvent," according to a February 2010 NAIC white paper on alternative mechanisms for troubled companies. "A carefully thought-out permitted practice could allow a troubled insurer time to dramatically restructure in order to provide better results for consumers in terms of timely claims payments."

An S&P Global Market Intelligence analysis finds that the U.S. life industry received an estimated net benefit of $9.47 billion in 2008 from the use of permitted practices. That, in turn provided a 3.1% lift to what would have been the aggregate capital and surplus amount for individual life insurers, excluding the effects of intercompany adjustments, when adhering strictly to statutory accounting principles. Even with that boost, aggregate individual company capital and surplus still fell by 4.6% in 2008. The consolidated industry surplus, including the impact of intercompany adjustments, declined by 5.7%, which represented the lone year-over-year retreat during the period from 2002 through 2019. 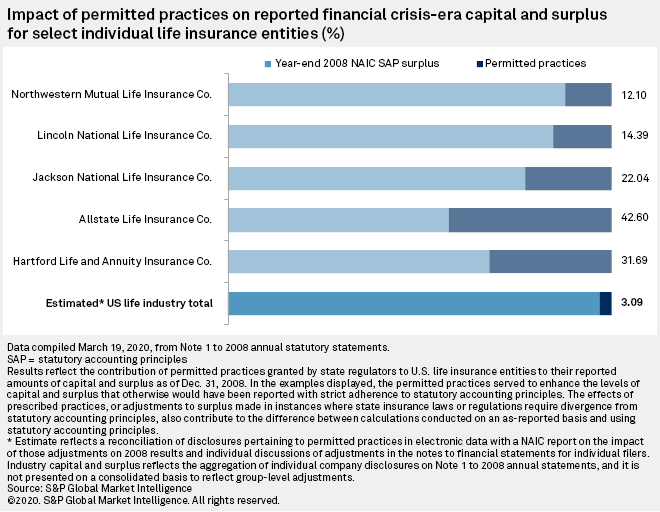 The industry posted a net loss of $52.31 billion in 2008, reflecting factors such as $50.92 billion in net realized capital losses and a 3.5% reduction in net investment income earned. The negative $14.61 billion net change in unrealized capital gains and losses also placed downward pressure on capital and surplus. A positive change in net deferred income taxes of $35.46 billion, which stemmed in part from the application of permitted practices to allow the admission of a higher amount of deferred tax assets, helped mitigate some of the damage.

Looking forward to year-end 2020, if we were to assume a decline from 2019 levels in unadjusted industry surplus as calculated using statutory accounting principles in the same relative magnitude as 2008 and then apply a comparable relative boost from permitted practices, there would be a 4.2% drop in the as-reported result as compared to a 7.3% decline without it. The difference implies a benefit of $14.4 billion based on 2019 capital and surplus levels, but that amount could prove conservative given the likely repeat of one significant permitted practice already in use.

Among those eight companies, the median increase to capital and surplus under statutory accounting principles was 25.6%. Allstate Life showed the largest increase on a relative basis as its reported capital and surplus for 2008 of $3.25 billion was 74.2% higher than it otherwise would have been in the absence of permitted practices.

The company obtained a permitted practice from Illinois regulators that allowed it to deviate from statutory accounting principles with respect to the amount of deferred tax assets it could classify as an admitted asset. Another permitted practice allowed the company to record market-value-adjusted annuities held in a separate account at amortized cost.

"In the extreme market conditions of the economic crisis, the market value method of accounting reduced statutory surplus due to unrealized losses on investments caused by wide credit spreads and the liquidity based dislocations in the investment markets in a manner not representative of the economics of the related liabilities," Allstate said in its annual report for 2008. 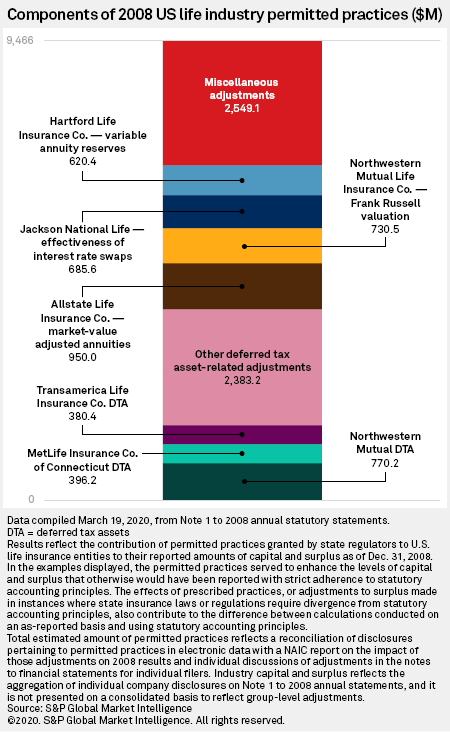 Such permitted practices would no longer be relevant in the same form as statutory accounting rules regarding the admission of deferred tax assets have changed since 2008. Companies may currently admit them, subject to certain limitations, so long as they are realizable within three years and represent less than 15% of capital and surplus, which corresponds to the treatment typically requested in 2008 as a permitted practice. At that time, admissibility was limited to deferred tax assets realizable within one year and in an amount of up to 10% of capital and surplus. But the unique nature of the current crisis could lead to the emergence of new and different avenues for relief.

Other permitted practices requested by life insurers pertained to items such as the valuation of investments in affiliates, the use of particular mortality tables in connection with the calculation of certain life insurance reserves, the classification of certain furniture and fixtures as admitted assets, the accounting for separate accounts funding agreements, and the method of reporting on the effectiveness of hedging programs related to interest rate swaps.

For one company that received a permitted practice in 2008 pertaining to the use of a specific mortality table in determining its minimum reserve liabilities, the related impact contributed to its ability to avoid reporting a surplus deficit.

Life reinsurer Scottish Re (U.S.) Inc. would have posted a surplus deficit of $219.7 million under statutory accounting principles if not for the cumulative $197.2 million in permitted practices and $189.9 million in practices prescribed by Delaware regulators under "emergency" orders that amended certain provisions of the state's insurance code.

Since 2008, in part reflecting the change to deferred tax asset admissibility standards in 2009. The impact of permitted practices has been much less consequential to the industry with one particularly notable exception.

Employers Reassurance Corp., the General Electric Co. subsidiary that has garnered attention in recent years for its long-term care reinsurance business, reported permitted practices in each of the past three years in amounts of no less than the $7.27 billion it recorded in 2019. Those permitted practices related to the company's spread of the full recognition of the indicated increase in additional actuarial reserves over a multiyear period, and they are offset in full by like amounts of prescribed practices pertaining to agreed upon capital contributions by GE.

Given that the Employers Re accounting predated the outbreak and is likely to recur in 2020, it creates the potential for the relative magnitude of benefits provided to industry capitalization from permitted practices to exceed the 2008 level should significant stresses persist through year-end.

Sign up to receive upcoming issues delivered directly to your inbox