Northwest Wind Rebound May Be More Supportive Of Q1'20 Earnings


Northwest Wind Rebound May Be More Supportive Of Q1'20 Earnings

After low winds reduced wind power production in the U.S. Northwest in 2019, winds picked up in first-quarter 2020, providing significant additional generation to the region. This boost in generation comes at a time when reported load at Bonneville Power Administration, or BPA, came in somewhat lower. While much of the region is impacted by COVID-19 pandemic mitigation measures, initial analysis indicates that BPA load responds to temperature changes more than demand reduction from stay at home orders issued in April.

Timely data on loads is not readily available in the Northwest. The second quarter of 2020 is shaping up to be more normal, with temperature changes determining BPA load more than impacts of COVID-19 stay-at-home orders. The BPA seven-day moving average load trended above the maximum seven-day moving average load for the past five years for 12 days in late March and early April, during which the daily high temperatures were below average in Seattle, Portland, Spokane, Wash., and Montana. April 16-17 saw BPA loads less than the minimum load for the last 5 years, paired with unseasonably warm temperatures in the Northwest U.S. A large BPA load reduction attributable to stay-at-home orders is not apparent so far in April 2020. 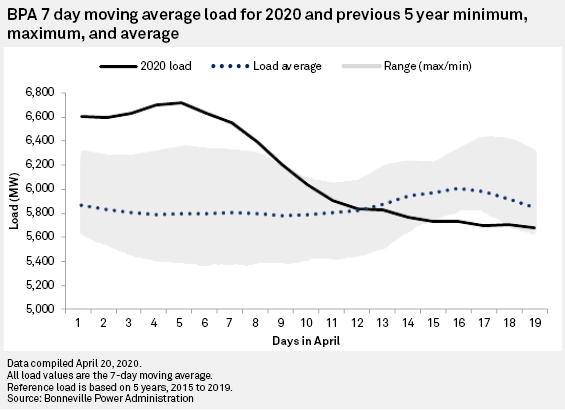