Global oil oversupplies have crushed prices and the fallout from the coronavirus has driven slackening demand worldwide. This setting has invoked an energy environment that is especially challenging for the liquids-f-focused midstream businesses.

The midstream industries that are closest to the upstream sphere, including the gatherers and processors, may experience the greatest disturbances in their cash flows, while liquids transportation and logistics enterprise will not be immune.

Considering the additional complexities brought by the arrival of the coronavirus and the volatility and uncertainty in the global financial and economic landscape, many midstream enterprises are likely to rely on their revolvers to address cash constraints in this unprecedented operating environment.

The revolver landscape varies considerably across the midstream industry, with observed borrowing levels outwardly dependent on a few variables such as market capitalization, position along the midstream value chain, and commodities mix. 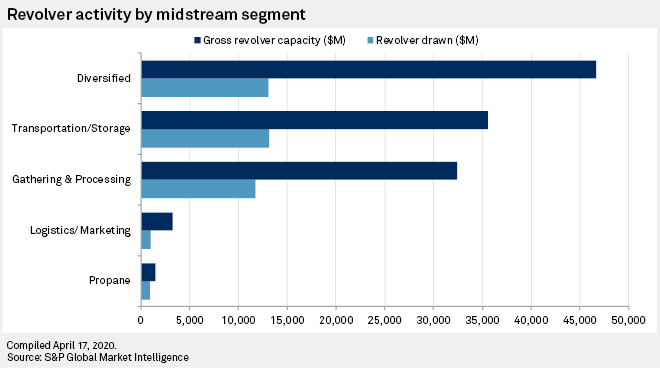 Those businesses with relatively small market capitalizations, modest diversification and a commodities composition weighted toward liquids generally have a higher percentage of their revolving credit facilities drawn.

A representative pool of midstream companies was assembled to evaluate short-term capital use and capacity across the value chain. A midstream industry snapshot, compiled from S&P Global Market Intelligence data available April 17 for a 48-company sample, revealed $79.5 billion of undrawn funds accessible to the group.

Note that revolver levels represent a roll-up of subsidiary term loans to the parent level. Market Intelligence data may not necessarily reflect all revolver drawdown activity in 2020 as some revolver access information may not be released until companies post first-quarter earnings and other updates in upcoming Form 10-Q and Form 8-K SEC filings.

Scrutiny of the group indicated many of the companies with the highest revolving loan utilization levels exhibited some or all of the following elements: relatively small market capitalizations, minimal diversification, and commodities composition skewed toward liquids.

The degree of revolver drawdown was more prominent with gathering and processing businesses, natural gas liquids producers and transporters, enterprises that manage the propane supply chain, and crude oil pipelines and terminals. These businesses are also likely to exhibit increased revolver utilization for the near term as they seek to bridge gaps in operating cash in an environment with no evident timeline to resolution and recovery.

Diversified segment has an average of 72% of revolver capacity available

Diversified enterprises with a primary focus on large-scale interstate transportation of natural gas appear less prone to draw on their revolvers. Three of the five largest diversified enterprises, measured by market cap, had from zero to 2% outstanding short-term revolver use. The group of three are Kinder Morgan Inc., Williams Cos. Inc. and Enterprise Products Partners LP

Together, the three have drawn roughly $98 million of a combined $13.5 billion of gross revolving credit, whereas Enbridge Inc. and Energy Transfer LP have respectively drawn 41.5% and 33.5% of the roughly $10 billion and $19 billion correspondingly available to these enterprises and their subsidiaries. As a group, the seven companies that comprise the diversified segment have drawn 28% of their available facilities, leaving $33.6 billion of $46.7 billion gross capacity available.

Gathering and processing companies have drawn 36% of aggregate revolver capacity

Conversely, within the 17-member gathering and processing, or G&P, segment, 13 companies had tapped revolvers to a considerable degree, with drawdowns that ranged between 25% and 80% of available capacities. The other four companies had between zero and 11% of their revolvers engaged. The aggregate market cap of the entire G&P segment was 64% lower April 17 compared with year-end 2019, falling to $30.8 billion from $85.6 billion in value. Total outstanding revolving credit for the segment was $11.7 billion, or 36%, of $32.4 billion total gross capacity. 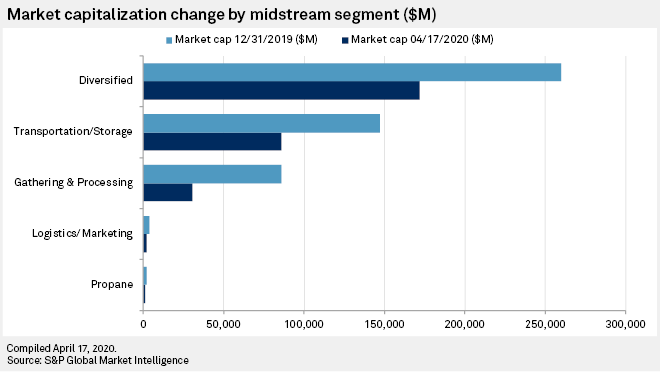 Transportation and storage segment revolver use is split by liquids vs. gas-centric players

A significant component of the transportation and storage segment has deployed capital from revolving credit lines. Nine of the 18 companies have drawn between 50% and nearly 88% of their gross available revolver capacities. The nine enterprises with the largest drawdowns primarily handle crude products and liquids including crude oil, tar sands, NGLs, refined petroleum, and ethanol. The market capitalization of these companies averaged $816 million and represented $7.3 billion in aggregate market value April 17.

The average market cap of the natural gas containing group was considerably higher at $8.7 billion on average for each company, or $78.6 billion in aggregate, April 17. While the liquids-focused group of nine lost nearly 58% of its aggregate market value this year, the natural gas containing group of nine was down just over 39% through April 17, likely from the mediating effect of its higher natural gas assets. Together, the 18 transportation and storage companies have experienced a 41.6% decrease in equity value this year.