Major mining companies have resumed investing in exploration-stage assets in the past two years, after a brief downturn in the last half of 2017. Deal activity in the first half of 2019 suggests that higher metals prices year over year will sustain renewed interest for a third consecutive year, although global macroeconomic headwinds might curtail base metals-focused activity. 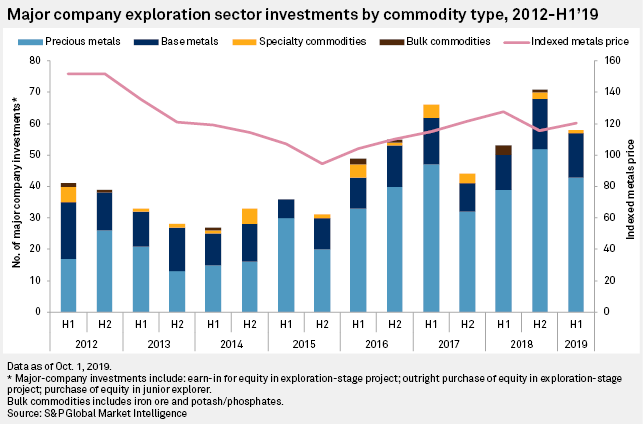 The general increase in metals prices since a five-year low in 2015 has been one primary driver of majors' increasing investment in early-stage projects and the junior companies that own them. Another may be a longstanding industry perception that producing companies are late in focusing on their long-term need to replace reserves, which ultimately can only come from new discoveries and early-stage project development. The majors' pullback in exploration sector investment in the last half of 2017 coincided with a spike in market capitalization, driven by higher metals prices; with high valuations at the time, the group exercised caution with acquisitions to avoid overspending.

Rising prices revived the fundraising ability of junior explorers, including through equity investments by the majors, which almost tripled to 40 in 2018 from 14 in 2015. The volume of deals is on track to rise again in 2019, with 20 deals in the first half compared with 14 in the year-ago period. Majors' direct participation in projects through purchase and earn-in deals has remained steady at around 37 in each of the past three halves — their most sustained period of early-stage project investment over the past eight years..

Gold has consistently dominated major company investments in the exploration sector over the period and has accounted for more than 60% of all deals in each half-year since 2016. Gold's share has fallen in the first half of 2019, however, dropping to 62% from 68% throughout 2018, while perennially second-placed copper's share has doubled in the past four halve, from 11% to 22%. These two metals' combined 84% share of all major company exploration deals in the first half of 2019 reflects their importance to the world's largest producers. 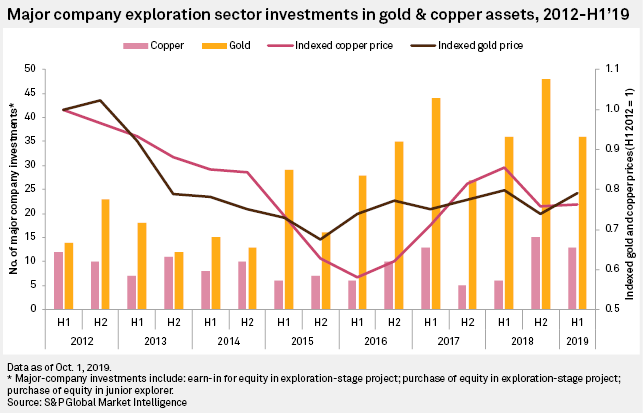 Canada-US region home to most targets but also most volatile

Canada and the U.S. have attracted the most interest in generating deals. Latin America is a distant second and appears more stable — likely because the juniors are less active than the majors in the region, whereas the juniors are much more active in Canada and the U.S. Of note in this view is how much more global majors invest in Canada-US early-stage projects than in projects in the Asia-Pacific region, which includes Australia. This suggests both that Asia-Pacific projects tend to be smaller and therefore less attractive to major producers and that Australian juniors have been more successful in raising funds on the Australian Securities Exchange to fund their projects.

The outlook for the remainder of 2019 and for 2020 is for the major producers to maintain or increase their current levels of investment in early-stage exploration, including direct purchases of projects and companies and participation in junior company financings. The majors' stronger balance sheets after recent cost-cutting efforts, along with improved investor confidence due to increased dividend payments, allow the majors to resume taking on the risk inherent in exploration sector spending. The picture will likely change, however, if the spreading consequences of the ongoing U.S.-China trade war and unresolved global political uncertainties cause a significant or prolonged retreat among metals prices and dampen investment in equity markets.