Mining industry M&A received a jolt in September 2018 when Canadian gold producer Barrick Gold Corp. and London-listed Randgold Resources Ltd. announced a US$6.10 billion merger to create the world's biggest gold producer at the time. Barrick completed the acquisition in January 2019. Just as important for M&A, the merged company announced its intention to divest a number of valuable assets considered noncore by the new Barrick, promising a string of substantial mine and project deals over the next few years.

Industry observers speculated at the time that this shocking event might also trigger a wave of strategic realignments in the industry, at least in the gold sector, and they were correct. Not to be outdone, in late January 2019 U.S.-based Newmont Mining Corp., Barrick's long-time rival for top gold producer, announced a friendly takeover of Canada's Goldcorp Inc., and in February, Barrick tried to thwart the deal by launching a hostile, but short-lived, bid for Newmont itself. This M&A upsurge among large gold producers began as annual average market gold prices continued trending upward in 2018, to US$1,270/oz from a six-year low of US$1,160/oz in 2015, and in light of a consensus five-year forecast of US$1,324/oz by 2023.

The total price paid in gold and major base metals (copper, nickel and zinc) acquisitions more than doubled year over year in 2018 to a six-year high of US$24.89 billion in 76 deals. The increase was a sharp rebound from a 13-year low of only US$11.53 billion paid in 90 deals in 2017, and the average deal value increased even more, from US$128 million in 2017 to US$327.5 million, the highest average deal value since 2012 and the second highest in 10 years. Despite the substantial increase, however, the total was still below the 10-year annual average of US$26.59 billion. Base metals deals accounted for 53% of the value and gold deals 47%, reversing the 2017 breakdown of 44% for base and 56% for gold. 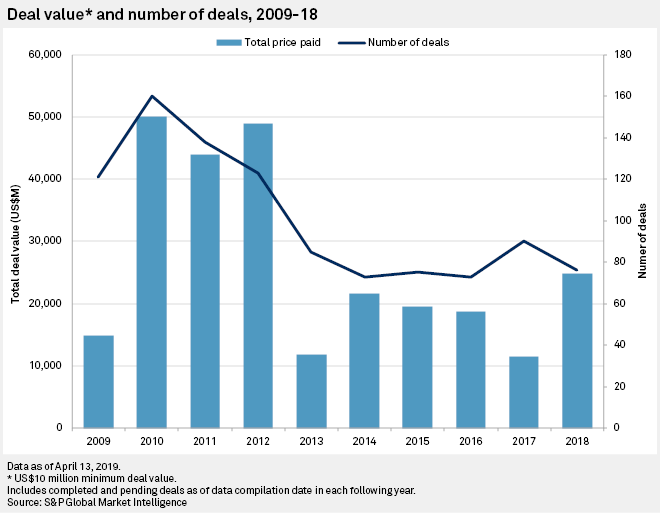 The financial collapse of 2008-09 marked the end of a strong seller's market in the previous three years, which was driven by high Chinese consumption, strong industrial metals prices and annual average gold prices increasing by leaps and bounds. The impact of the downturn manifested fully in 2009, with the annual deal value collapsing 64% year over year to US$14.88 billion in 121 deals — the high number of deals and the low price illustrating the steep decline in asset valuation.

Optimism over a surprising rebound in metals prices in 2010 and the attraction of still-depressed asset valuations drove the annual total paid and number of acquisitions in 2010 to record highs of US$49.98 billion in 160 deals, levels that were largely sustained through 2012. By mid-2012, however, an abrupt halt in Chinese construction, falling metals prices and the onset of years of corporate retrenchment triggered a buyer's market that began in 2013 and continued through 2017, as companies divested noncore assets — often at fire-sale prices — and curtailed expansionary spending in favor of increasing shareholder dividends.

Increase in base metals deal value twice that of gold deals

The year-over-year increase in total value in 2018 was split between gold and base metals acquisitions, with base metals deals rising the most. The base metals value jumped 159% to US$13.16 billion in 30 deals from US$5.09 billion in 31 deals in 2017, for an average deal value of US$439 million compared with US$164 million the year before. This was the third upswing in the five years since the 2013 collapse in mining M&A, during which the base metals total has alternated between about US$13 billion and less than US$7 billion (see table below). The annual number of base metals deals has, however, remained within a tight range of 28 to 31. The resulting fluctuation in the annual average deal value at least partly reflects the long period of uncertainty surrounding the global economy and industrial metals' market prices. 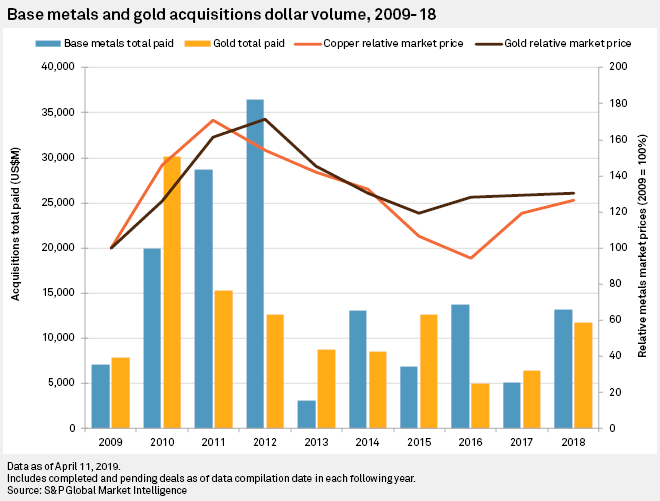 Throughout this report, projects are categorized by primary metal. We do not split the acquisition cost for projects that contain more than one metal. Terminated, non-equity (royalty and streaming) and "earn-in" transactions are not included in the analysis, and deal status is as of the time the data was compiled.

The gold value rose 82% to US$11.72 billion in 46 deals from US$6.44 billion in 59 deals in 2017, for an average deal value of US$255 million compared with US$109 million the year before. Just over half of the gold total was in one large deal, Barrick's US$6.10 billion acquisition of Randgold; otherwise, the gold total would have been just over the 12-year low of US$5.01 billion in 44 deals in 2016. The more-than-doubling of average deal value year over year suggests that the period of gold companies offloading lower-value assets or being forced to sell below value may be over and that acquisition prices are beginning to reflect the stronger gold price. Certainly, Barrick and Newmont Goldcorp have indicated their intention to seek maximum value for the substantial number of surplus post-merger mines and advanced projects they will be putting up for sale over the next few years. 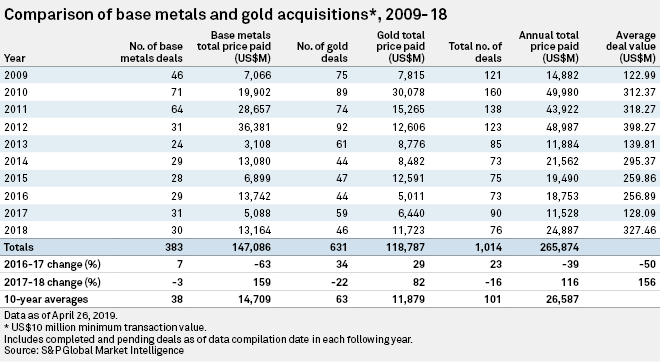 Barrick Gold's acquisition of Randgold was the largest deal in 2018. The second largest was Freeport-McMoRan Inc.'s transfer of 41.87% of the giant Grasbergcopper-gold operation in Indonesia, valued at US$3.85 billion, to privately owned local conglomerate PT Indonesia Asahan Aluminium (Persero), or Inalum. The transfer was part of the Indonesian government's policy of enforcing majority Indonesian ownership of mines and gave Inalum a total 51.2% interest in Grasberg. Rio Tinto received US$3.50 billion of the value in cash for its 40% participating interest in Grasberg based on the mine's production. Freeport received US$350 million in cash and emerged on closing in December 2018 as the 48.8% owner of Grasberg and its operator. 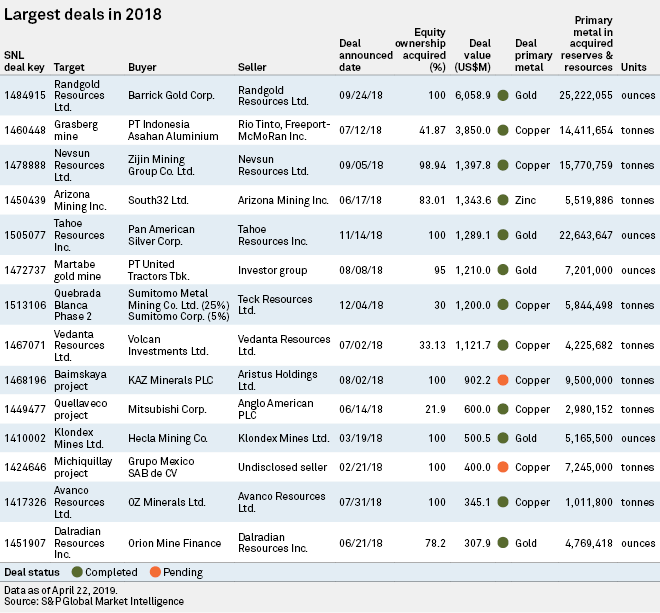 In the third-largest deal, Zijin Mining Group Co. Ltd. outbid Lundin Mining Corp. for Nevsun Resources Ltd. in September 2018. In July, Lundin had announced an unsolicited takeover offer of US$3.621 per share in cash to acquire Nevsun and its feasibility-stage Timok copper-gold project in Serbia. However, Lundin's proposal included plans to spin off Nevsun's only revenue-generating asset, the 60%-owned Bisha copper-zinc mine in Eritrea, which did not sit well with Nevsun and many of its shareholders. Zijin subsequently made a successful offer of US$4.55, or C$6.00, per share in cash for the 98.94% of Nevsun it did not already own, representing a premium of 21% to Nevsun shareholders (57% to Nevsun's price prior to the Lundin bid). The deal closed in March 2019. Zijin said it would retain Bisha and would extend its mine life and explore for new deposits at the project.

The outlook for full-year 2019, based on 26 first-quarter transactions with a deal value totaling about US$13.26 billion, is for year-over-year increases in number of deals and deal value, with higher prices paid for metals in reserves and resources. The first quarter was marked by increased major company deal activity, reflecting strategic shifts among the larger producers, who had been relatively dormant since 2012. Among the larger plays, the merger of Newmont and Goldcorp was completed April 18. Although Barrick's hostile takeover bid for Newmont failed, the attempt accomplished one of Barrick's long-standing goals: after years of balking, Newmont agreed in March to enter into a joint venture with Barrick on the two companies' top-tier Nevada gold operations, Barrick Nevada and Nevada Operations. Although the joint venture represents substantial value, no deal value has been announced pending completion, so the value is not included in our first-quarter data. Also in March, Glencore PLC, Goldcorp and Yamana Gold Inc. agreed to integrate the Alumbrera copper mine and the Agua Rica copper project in Argentina. Yamana will own 56.25% of the combined project, Glencore 25% and Goldcorp, as Newmont Goldcorp, 18.75%. This deal is also pending closure and does not yet have an announced value. 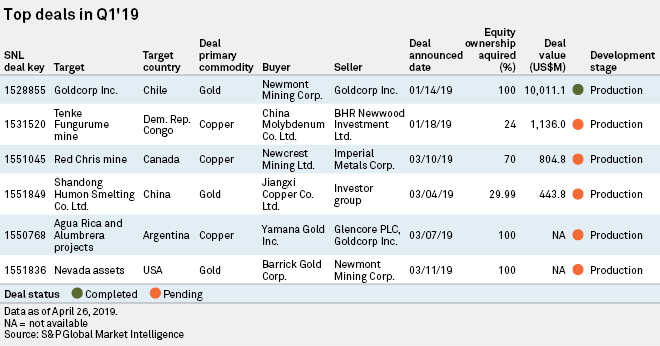 Talk to a Metals & Mining Expert.

State Of The Market: Mining