Heating degree days, or HDDs, nationwide during the first quarter of 2020 were 14% below the same period in 2019 and 10% lower than the monthly norm. HDDs for March were 22% below year-ago levels and 12% below the March norm. Last month’s data represents a fourth consecutive month wherein heating degree days have fallen short of both last year’s comparable levels and the corresponding norm for each month.

As seen in the monthly map, while mild winter temperatures were widespread across much of the nation, there were some regional variations. From a monthly perspective, the East South Central, West South Central and South Atlantic regions were particularly warm. The Pacific region was the only one to see cooler temperatures than a year ago, and the Mountain region was essentially even with last year. 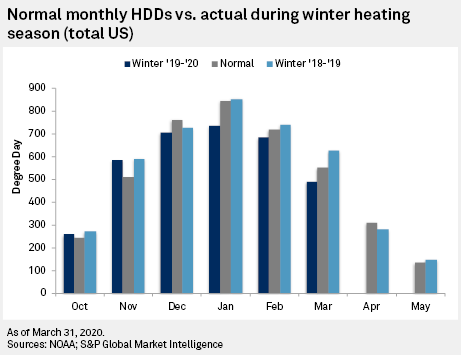 Recall that 2019 finished on a mild note, with fourth-quarter HDDs 2% lower year over year. Despite the lackluster start to winter, adjusted earnings for the companies in the RRA utility universe were up 13.2% in the fourth quarter of 2019 compared with the fourth quarter of 2018. For full-year 2019, EPS for the utility group were up 4% on average. Based on S&P Global Market Intelligence consensus estimates, EPS are projected to grow 5% in 2020.

Almost all covered gas utilities have substantially protected their revenues and earnings from the variability that results from abnormal weather through implementation of regulator-approved clauses and mechanisms. When these mechanisms are implemented in a symmetrical manner for both colder and warmer weather, there should be little difference in the revenues collected by a utility compared with those authorized based on normal weather in its last general rate proceeding.

Despite the increased use of such regulatory mechanisms, the lackluster winter weather and broad decline will not help the profit outlook for the group, especially for those companies with exposure to gas exploration and production activities, having felt the squeeze from the pandemic-stalled economy. 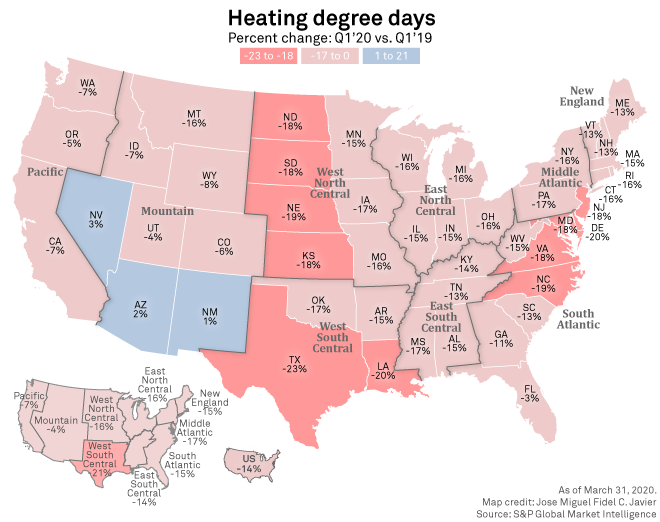 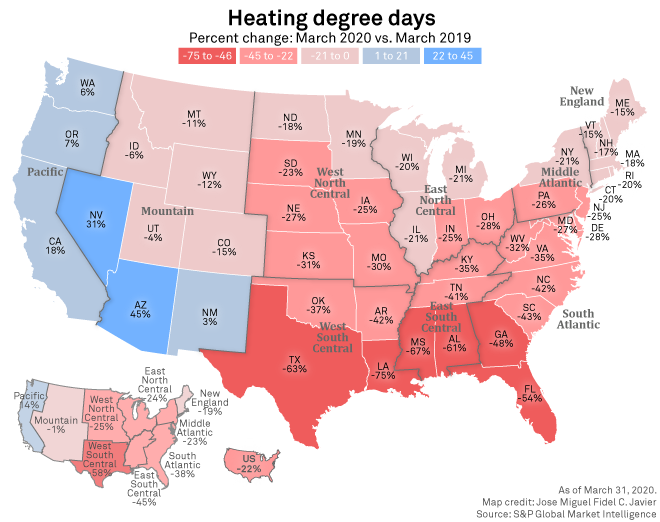 Additionally, very much at issue will be the negative impact on the U.S. economy and utilities specifically of the coronavirus pandemic. Based on current S&P Global Market Intelligence consensus estimates, which are likely to be trimmed in the coming months, so far few, if any, companies in our coverage universe have altered guidance for 2020 EPS or their longer-term profit growth goals. Likewise, analyst profit expectations remain relatively unchanged over the past month.

However, as events unfold in coming weeks and as companies release first-quarter data, some pronouncements are likely to be made regarding both earnings outlooks and capital spending, as projects are interrupted by supply-chain impediments, labor issues and near-term demand reductions. While difficult to forecast future events, it is not unreasonable to expect that 2020 EPS growth assumptions could be in the low-single-digit range for the group once all companies have reported first-quarter results.

It appears logical that first-half 2020 EPS results for companies will experience contracted profits, most especially as sales to industrial and commercial customers are under pressure. Regarding the second half of 2020 and beyond, much will be dependent on the location and pace of the restart of the US economy, clouded by a possible second wave of virus activity as has been forecast by some sources. Looking ahead to the upcoming summer air conditioning season, recall that last year’s third quarter was 8% above normal on a nationwide basis. 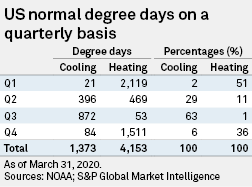 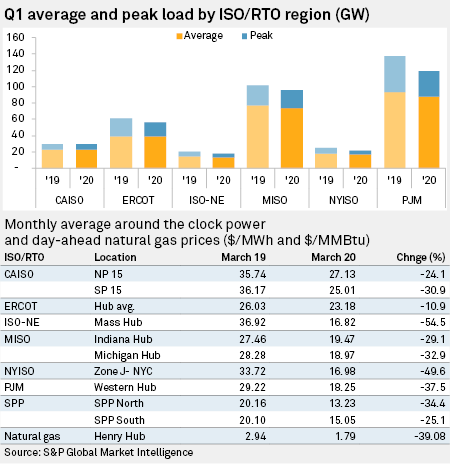 With the exception of a small uptick in the Electric Reliability Council Of Texas Inc., average loads continued to decline across U.S. power markets last month as below-normal heating demand and coronavirus measures kept demand in check. The number of HDDs was as much as 42 degree days below normal each week in March nationwide

On a quarterly basis, average load in ERCOT rose 0.7% to 39 GW year over year, while around-the-clock prices fell 11% to $23.18/MWh. The steepest declines in power demand in the first quarter were observed in PJM Interconnection, with average and peak loads down 9% and 18.8%, respectively, and in New York ISO, which saw average and peak demand decline by 9% and 13.4% quarter over quarter.

Grid operators have been monitoring impacts to electricity demand, with certain markets seeing more pronounced drops in load compared to expectations. On March 25, NYISO said it observed a 2% decline in daily peak energy load relative to the norm at this time of the year, according to its blog.

On March 23, the Midcontinent ISO reported its peak energy use in March to-date was 18% below levels from the same period in 2019. Market Intelligence data shows a similar 18.4% drop in peak load year over year. Other markets have seen smaller shifts in average hourly and peak loads year to year. The California ISO average hourly load in March fell 1.1%, and peak load was down 0.3%.

A cooling degree day is created for each degree that the mean daily temperature exceeds 65 degrees Fahrenheit, and a heating degree day similarly reflects below-65 degree temperatures. The data included in this report is based on population-weighted data collected by the NOAA/U.S. Department of Commerce. Beginning with this version of the Degree Day Report, we have altered our presentation of NOAA "normal" data. Whereas in the past, the NOAA data has been provided to show 30-year "norms" based on historical data, we have calculated more up-to-date and relevant "norms" by computing real-time 15-year norms. We believe this data will be more representative of current weather trends and will reflect recent climate changes.