Leadership Change That Matters: A Value and Momentum Story

The volatility associated with momentum began to climb in June 2020, peaked in November, and has declined since. Value outperformed momentum over the same time.

Volatility remains at elevated levels, indicating that the rotation may continue until momentum again resumes its leadership.

Markets rotate between types of stocks when investment attributes fall in and out of favor.  By at least one indicator, the rotation from momentum to value which began last summer appears to be aging. Cheap stocks (value stocks) earned a premium over stocks with high prior returns (momentum stocks) across the globe in the second half of 2020. Value stocks have historically outperformed momentum stocks when the volatility of returns to momentum is elevated, a previously documented[1] relationship that has held globally. 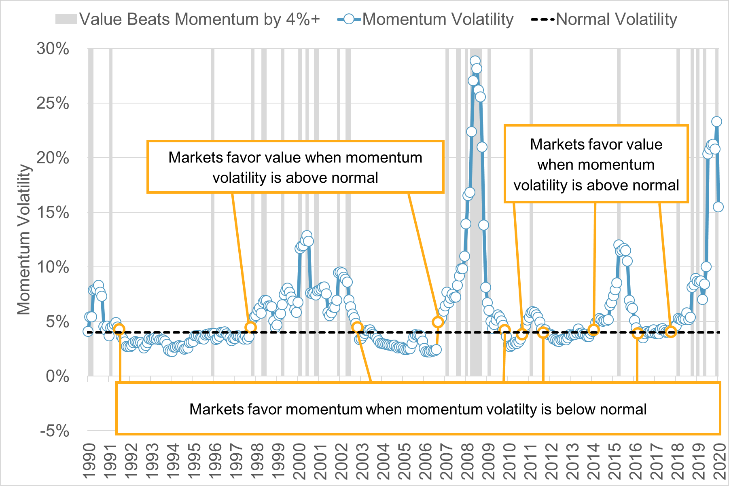 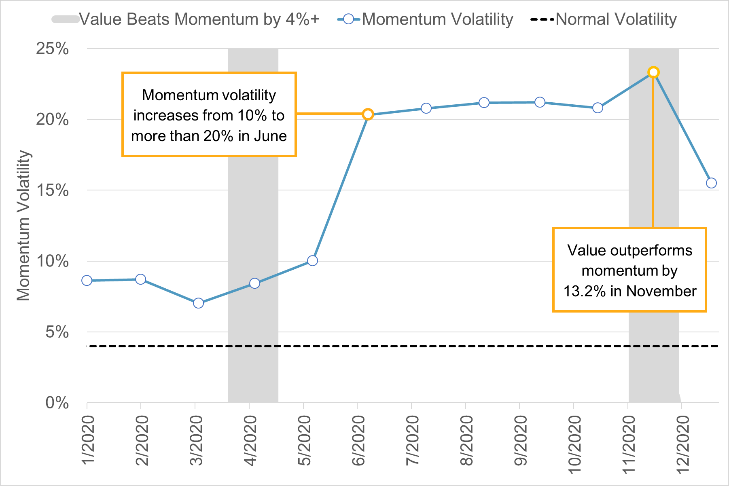 Source: S&P Global Market Intelligence Quantamental Research. Data as of January 11, 2021. Indices are unmanaged, statistical composites and their returns do not include payment of any sales charges or fees an investor would pay to purchase the securities they represent. Such costs would lower performance. It is not possible to invest directly in an index. Past performance is not a guarantee of future results.

Historically, the momentum style (also called ‘trend following’) has worked well when trends persist but crashes when trends change. For example, as markets began to recover from the Great Financial Crisis in 2009, momentum in the Russell 3000 universe saw a 48% drawdown. Just prior to this drawdown, momentum’s volatility[2] increased to 28%, seven times higher than the median 4.05% over the 30-year period (Figure 1). Value continued to dominate momentum until volatility returned to its baseline in 2010. Momentum returns were positive over the next 5 years (2010-2015), averaging a 6% return per year. Then in 2016, momentum’s volatility again saw double digits and returned -9.6% over the year.

In June of 2020, volatility in the momentum style reached levels that have not been seen since the Great Financial Crisis. The value style outperformed the momentum style in the second half of 2020 by more than 10%. Volatility in momentum remains near its highs as of year-end 2020, which has historically indicated additional upside to value stocks.

[1] Sandberg, D.J., 2019. “Value and Momentum: Everywhere, But Not All the Time.” S&P Global Quantamental Research, https://www.spglobal.com/marketintelligence/en/news-insights/research/value-and-momentum-everywhere-but-not-all-the-time

[2] Volatility is defined as the standard deviation of daily returns over the previous 126 trading days.