We expect a greater seaborne iron ore deficit of 54 million tonnes, which is increased from 36 Mt due to larger-than-expected disruption at Rio Tinto's mines in Australia and a slower resumption of idled Chinese concentrate capacity.

Global iron ore production is expected to grow by 1.2% year over year in 2019 to 2.2 billion tonnes.

We expect steelmaking activity in China to decrease over the December half of 2019.

Prices for 62% Fe iron ores have remained at approximately US$90/t to US$100/t since the beginning of April and have been above US$100/t in their latest run since June 10. We have increased our price expectations on increased supply disruptions, though we hold our estimates for steel demand broadly constant given policy uncertainty and a long-held assumption of capacity curbs for the December half of 2019. We expect a greater seaborne iron ore deficit of 54 million tonnes, which is increased from 36 Mt due to larger-than-expected disruption at Rio Tinto's Pilbara mines in Australia and a slower resumption of idled Chinese concentrate capacity. 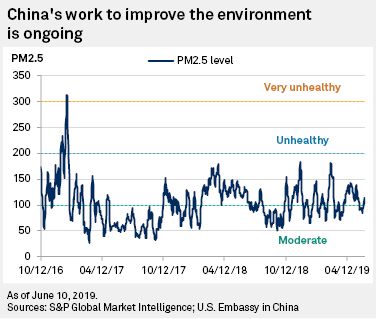 In China there has been heavy promotion of electric vehicles for environmental reasons. Electric vehicle growth is driving steel substitution by aluminum for weight reduction as well as increased demand for copper, nickel, cobalt and lithium. In its latest policy, the government requires all light vehicles to adhere to tougher "China VI" emission standards by 2020 as part of efforts to combat pollution. The reinvigorated growth in demand for electric vehicles has caused an 18% year-over-year increase to 97,000 units in April while China's total car sales fell by 15% to 1.98 million, according to the China Association of Automobile Manufacturers.

We expect the environmental pressures within China's iron ore and steel supply chain to spread throughout the more economically developed world, and even more so in emerging economies such as India. The environment becomes an important issue once citizens have the space to consider it without depriving themselves of other, more essential short-term items. China has already achieved peak production in a multitude of metals including steel, where consumption is already at approximately 560 kilograms per capita, with only the likes of South Korea and Japan boasting greater rates due to their significant export share in a number of end-use goods such as vehicles and shipbuilding.

State Of The Market: Mining