Sara May Bellizzi, Steve Piper and Ciaralou Palicpic contributed to this article.

While steady capacity revenue streams and positive spark spreads have encouraged a wave of combined-cycle gas turbine, or CCGT, development in the PJM Interconnection region, Market Intelligence estimates suggest a wide range of financial performance. Specifically, S&P Global Market Intelligence projects that on an unhedged merchant basis, CCGT plants in Ohio have higher profitability than plants in New Jersey. This is attributable to greater seasonality of natural gas prices along the Atlantic coast relative to prices in Ohio and West Pennsylvania, where plants can access the abundant and low-cost gas from the Marcellus formation, closer to wellhead production. The difference in fuel costs is also reflected in the capacity factor of Ohio plants compared to that of New Jersey plants. Least-cost generators will run more often and at higher generator margins, or spark spreads.

The Marcellus gas region, underneath Eastern Ohio, Pennsylvania, West Virginia and Western New York, provides a large supply of gas. While that natural gas flows relatively unconstrained and at low prices to New Jersey and New York during the summer, pipelines become constrained during periods of high heating-season demand, leading to much higher spot prices along the coast compared to the Marcellus region. Natural gas forward markets have reflected this difference in prices for the last several years. 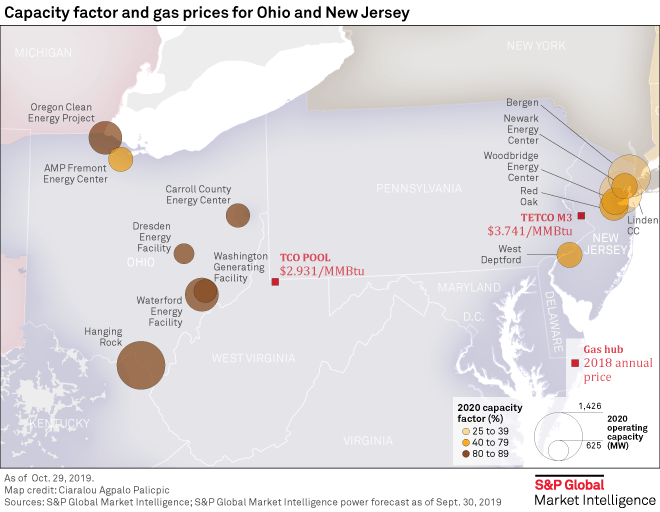 To illustrate this difference, Market Intelligence evaluated the forecast unhedged margins of representative power plants in Ohio and New Jersey. The open margin analysis assumes market rates for electricity, capacity and input natural gas. Contracts and hedges in place for these CCGT plants could materially change their actual financial performance. 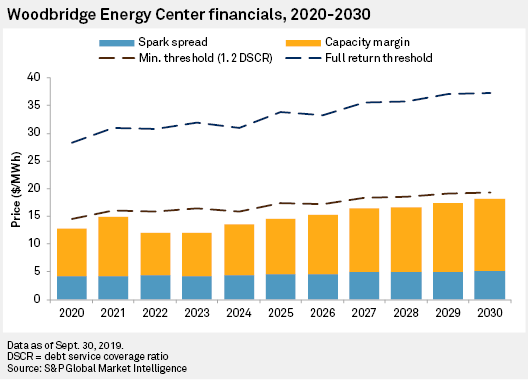 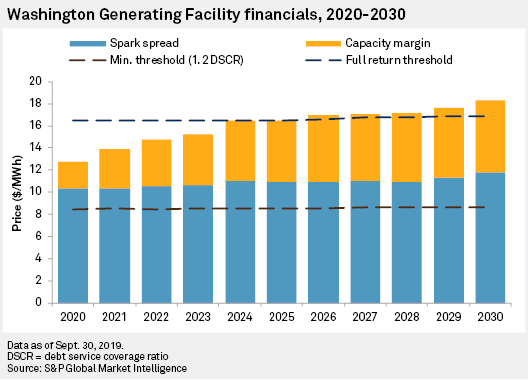 In 2018, the reported Woodbridge Energy Center capacity factor is 72%, while the Washington Generating Facility reported a capacity factor of 77%. For 2020, the Market Intelligence Power Forecast projects a lower capacity factor at Woodbridge of 51%, while Washington Generating Facility is projected to run more, close to 88%. With natural gas prices expected to decline over the next few years, the competitive advantage of the Ohio CCGT plants in wintertime is expected to grow. As the number of new CCGT projects in the Marcellus region grows, plants on PJM's eastern seaboard may face greater risk of displacement and financial impairment. New Jersey is scheduled to reenter the RGGI market in 2020 and this may further decrease the margins for New Jersey CCGT plants.