China’s bond market witnessed a rising trend of defaults in 2019. Up to 121.7 billion RMB of payments had not been fulfilled on time, which hit a new record.[1] Among all these companies with defaulted bonds, we have chosen a private company with public debt and publicly traded subsidiaries as an example to illustrate how to leverage the S&P Global Market Intelligence quantitative credit analytics models to monitor creditworthiness and deterioration ahead of the actual default.

The company we have selected used to be one of the pioneers of China’s State-Owned Enterprises (SOEs) reform that was designed to bring private capital and management into SOEs. It enjoyed fast development since the reform began in 2014 through a series of mergers and acquisitions (M&A). In a mere four to five years the group diversified its business model by engaging in a wide range of activities; from financials and real estate, to information technology and beverages (wine). However, reliance on heavy borrowing and extreme investing ultimately dried up the company’s cash flow and made it unable to fulfill an interest payment of 2.5 billion yuan in March 2019. Although the bill was guaranteed at the time by another financial institution that paid the interest and principal, the debt-ridden company couldn’t pull itself out of its financial quagmire and soon defaulted on another bond payment in April 2019. This was just the beginning as the company subsequently failed to meet several other financial obligations.

S&P Global Market Intelligence Credit Analytics’ product offers two types of quantitative probability of default (PD) models for public companies- a fundamentals-driven PD model and a market-driven PD model. When both models generate outputs, it is recommended to analyze them together in order to reconcile the common limitations of statistical models, related to type 1 and type 2 error:

Type 1 error- the risk of a model assigning a low PD to a company that will default; this leads to extending loans to companies that will default in future, exposing the lender to unwanted losses.

Type 2 error- the risk of a model assigning a high PD to a company that will not default; this limits the number of firms to which an originator is willing to extend a loan, thus reducing the business that the lender can sustain.

The first figure shows a significant increase of the company’s PD value between the period of Q3 2018 and Q4 2018, while the other three benchmarks are stable or even decreasing. To make a better and more straightforward comparison the second figure depicts the spreads of the lines, which is the difference between the company’s PD value and the three benchmarks, respectively. The widening spread from Q2 2018 to Q4 2018 confirms the deterioration of the company’s creditworthiness versus the benchmark values.

A sharp increase of the PD spread (which gives an early warning signal of credit profile deterioation) appears at least two quarters before the missed payment event, whilst domestic credit rating agencies still maintain a positive credit risk assessment for the company. Hence, from a fundamentals point of view, the deterioration of the company’s creditworthiness has already been reflected in its financial statement and the S&P Global Market Intelligence Credit Analytics fundamentals statistical model captured it and generated early warning signals in advance.

PD Model Market Signals (PDMS) is a market-driven credit risk model that utilizes firm-specific market data to obtain daily credit signals that enable monitoring of the market perception of credit risk for the same companies.[6] Since the company we have selected is not publicly listed but operates as a private industrial conglomerate, PDMS is instead applied to analyze its four publicly traded subsidiaries, namely Subsidiary A, Subsidiary B, Subsidiary C and Subsidiary D.

The reason we select these four companies is that the company is either their largest stock holder or the actual controller of these companies.  This means these firms’ business capabilities have great impact on its parent company’s profitability, thereby influencing the parent’s creditworthiness. In short, the idea is to gauge the evolution of the creditworthiness of the privately held parent company by focusing on a subset of its publicly listed subsidiaries. 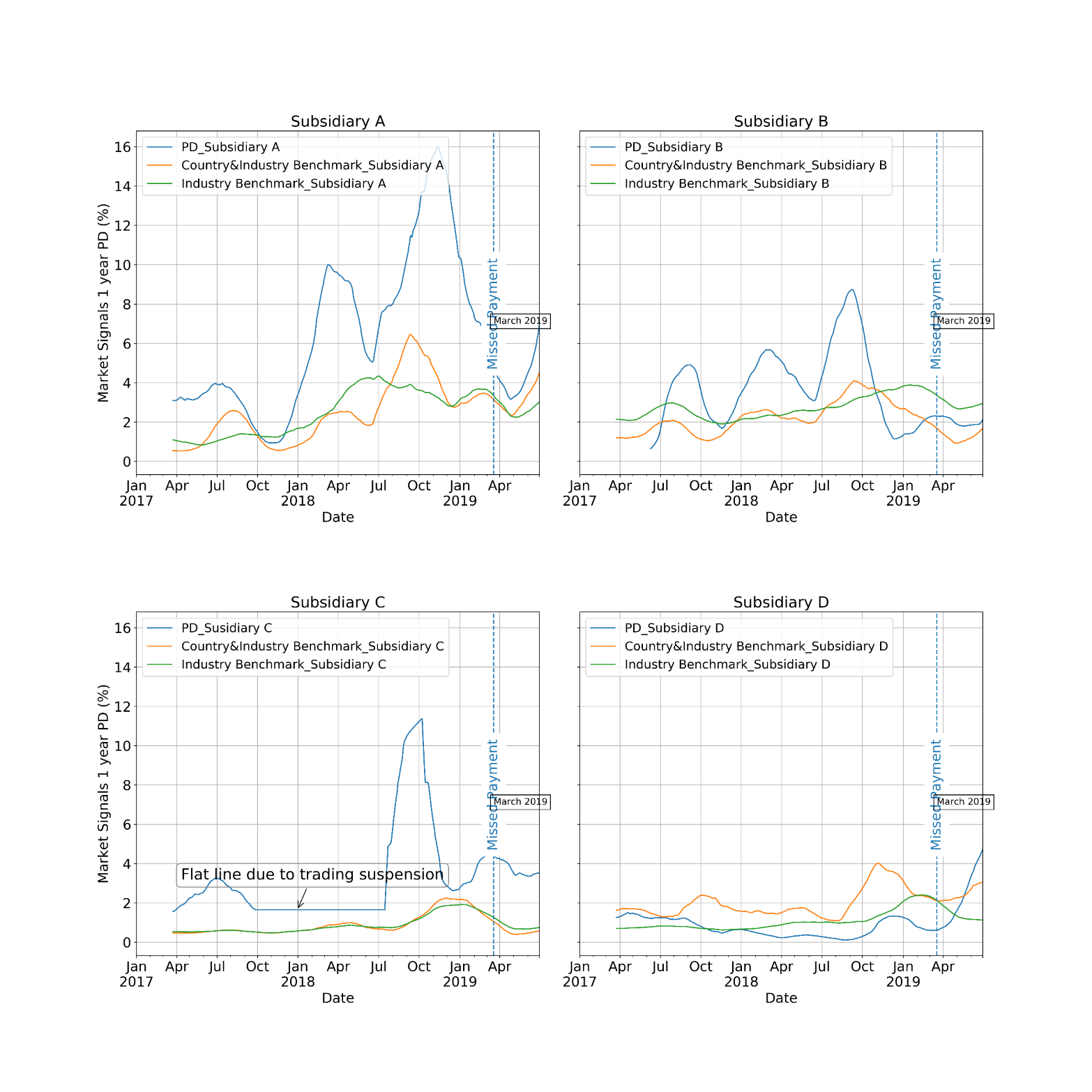 Furthermore, in order to quantify the overall difference between the four subsidiaries’ PD values and their corresponding benchmarks, we have also calculated the average of the percentage deviation as the following figure shows. With the significant increase of the percentage deviation value around September 2018, one can possibly detect their parent company has already been in a precarious situation. 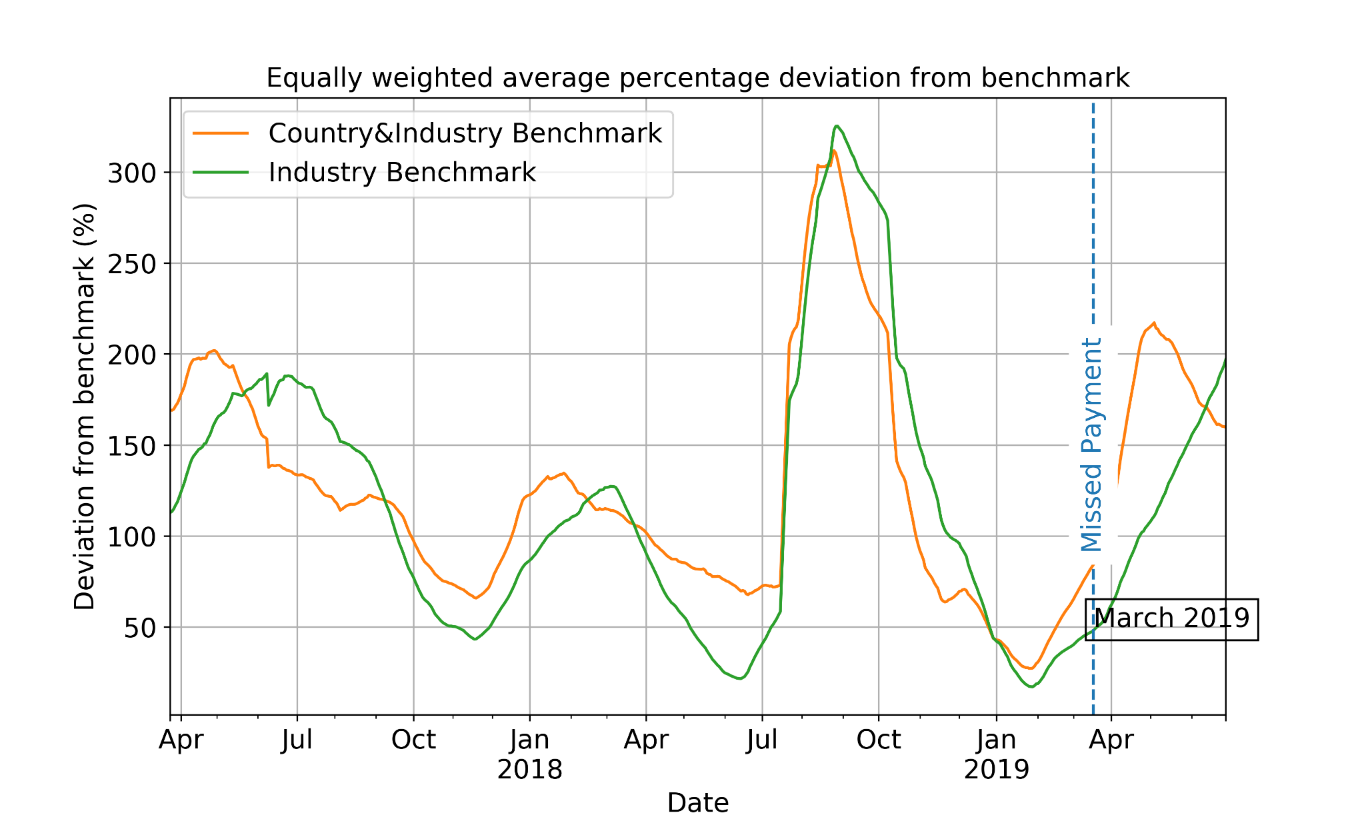 In summary, we have shown it is possible to complement the fundamentals analysis of a private company with a market-driven view on its public subsidiaries, and leverage the S&P Global Market Intelligence Credit Analytics’ PD Model Fundamentals and PD Model Market Signals. In this case study, both quantitative credit risk models manage to generate early warning signals of credit risk deterioration at least a couple of quarters prior to the actual default. The analytical framework described in this case study can provide investors and risk managers with new, efficient and straightforward approaches to complement their traditional credit analysis.

[3] Company Country Benchmark is the median of all companies’ PDs of which the underlying company is geographically registered.

[4] Company Industry Benchmark is the median of all companies’ PDs within specific GICS industry sector.

[5] Company Country & Industry Benchmark is the median of all companies’ PD within specific GICS industry sector and where the underlying company is geographically registered.