The ethanol industry narrative could not be more different, with a limited product palette and high dependence upon the domestic fuel blending market.

Earnings pressure has continued this year as the U.S. ethanol industry struggles against eroded margins from lower ethanol prices, higher supplies, and growing production capacity. While there is considerable debate regarding the origin of the industry distress, a central force behind the upheaval appears to be overcapacity and overproduction. 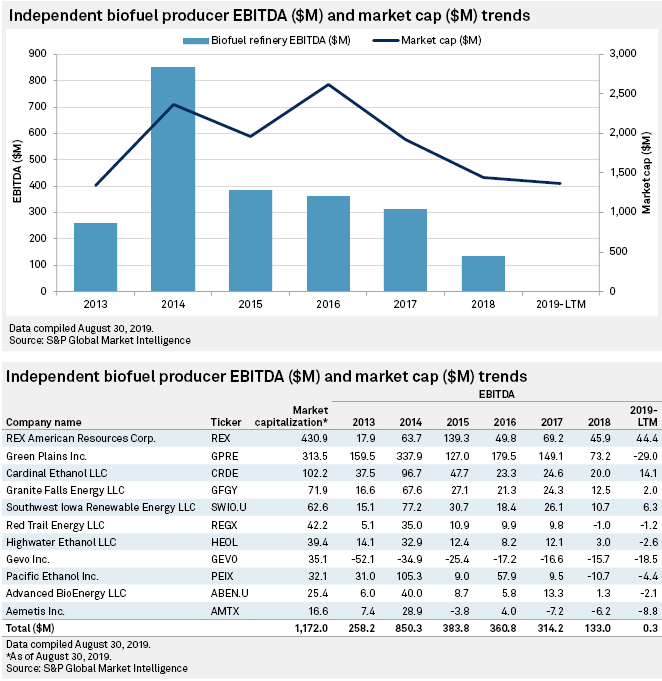 Ethanol production reached nearly 16.1 billion gallons in 2018 by data from the U.S. Energy Information Administration. Whereas demand as assessed by the EIA was 14.4 billion gallons — matching the level of demand in 2017. The ethanol blend concentration in gasoline for both 2017 and 2018 was reported by the EIA to be 10.1% overall by volume, rising slightly from 10.0% in 2016.

U.S. nameplate ethanol production capacity reached nearly 16.9 billion gallons per year in January 2019 according to EIA survey data, rising from about 16.3 billion gallons in January 2018. In response to continued margin erosion in 2019, several ethanol producers, including Green Plains Inc. have slowed production and idled some plants. Green Plains management mentioned in second quarter earnings discussions that it planned to shift the company's primary emphasis from ethanol to the production of high-protein cattle feed, in a move to escape some of the volatility of the ethanol business. Distillers grains are one of a few side products generated from the ethanol fermentation process, and may be fortified to provide nutrient rich animal feeds.

Although the U.S. renewable ethanol industry has steadily grown capacity the last several years, aggregate earnings for a group of 11 publicly traded independent ethanol producers, used as a proxy for the industry, began to show clear signs of challenge in 2018. Since 2017, when EBITDA was $314 million for the group, aggregate EBITDA dropped to 133 million in 2018, and through the 12-months ended June 30, 2019, EBITDA precipitously dropped to $0.3 million for the group. The proxy of 11 are used to assess the overall ethanol industry, considering that many of the largest ethanol producers are diversified enterprises and do not provide segmented financials. 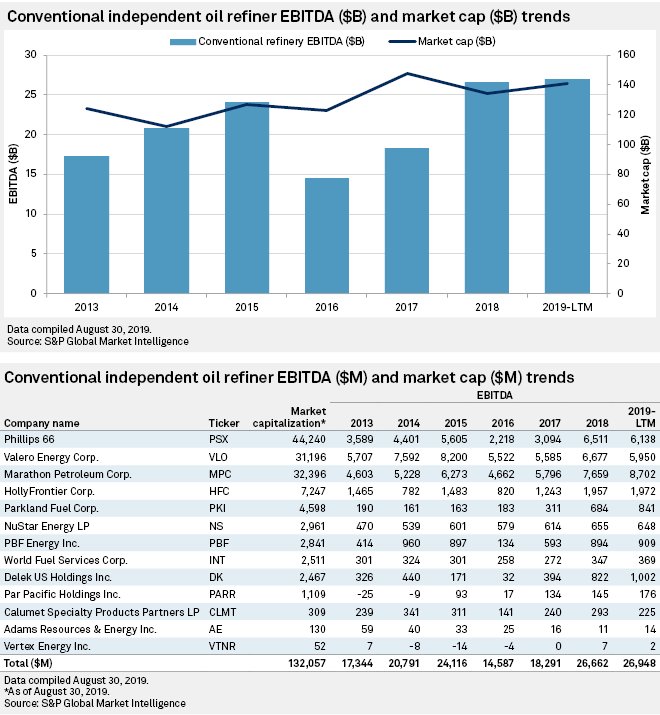 U.S. oil refiners have conversely experienced a rebound in fortunes since their aggregate EBITDA dipped to a low point in 2016 when the market was struggling with oversupply and low prices. Since that time EBITDA has risen every year at a representative group of 13 independent conventional refiners. The diversity of products that are derived from oil refining, including kerosene, jet fuel, diesel, gasoline, asphalt, and a host of petrochemicals, alongside a wide breadth of domestic and international demand for refined products has contributed to healthy product margins for conventional refiners the last several years.

The ethanol industry narrative could not be more different, with a limited product palette and high dependence upon the domestic fuel blending market. Excess production can quickly overwhelm demand due to the limited range of use for ethanol and derivative products such as distillers grain, corn oil, and corn syrup. As a result, the export market for ethanol remains modest despite growth potential from Brazil, driven by that nation's robust fuel blending mandate. However, the majority of Brazil's ethanol demand is served by its own industries.

The fuel blending standards of Brazil presently call for ethanol to comprise 27% of gasoline, compared with 10% to 15% in the U.S. Brazil also has a significant number of vehicles that are capable of burning 100% ethanol. While transportation demand for ethanol grows robustly in Brazil, the country generates the vast majority of its needs through cultivation and fermentation of sugar cane. Considering that sugar cane is a seasonal crop with peak yields during May through October, the transportation industry may rely upon non-domestic sources if supplies run short, or the cost of importation moves lower at times, creating opportunities for arbitrage. Only so much arbitrage is possible as 20% tariffs kick in when ethanol imports move above an annual ceiling of 600 million liters or 158.5 million gallons.

Outside of Brazil, the next largest market opportunity for the U.S. is Canada, as that country, much like the U.S., incorporates ethanol in gasoline, at a federally mandated minimum level of 5%. Since 2013 the national blend-rate has exceeded 6% as some provincial blending requirements exceed 5%. Canada's ethanol producers serve about two-thirds of the country's annual ethanol needs of 830 million gallons through an established agricultural industry and network of bio-refineries, with the shortfall imported primarily from the U.S. Canada is expected to soon adopt a carbon intensity approach to the incorporation of renewable fuel into gasoline, which may eventually increase the required level of ethanol in gasoline.

Canada's new approach has not met with resounding acceptance as five provinces have challenged the carbon pricing framework in court. Saskatchewan, Alberta, Manitoba, Ontario, and New Brunswick prefer to maintain their own volumetric mandates rather than accede to the federal carbon intensity offset approach. Despite the uncertain outcome of the clash, Canada is expected to represent a moderate growth outlet for U.S. producers for some time, as ethanol capacity in Canada is not expected to grow significantly the next several years. Additional information is available in the Canada Biofuels Annual 2019 produced by the Foreign Agricultural Service of the U.S. Department of Agriculture.

China could represent one of the largest potential markets, considering the country's desire to become an environmental leader and improve air quality, especially in urban areas. In 2017 China announced a nationwide requirement for 10% ethanol in gasoline by 2020. E10 is presently being trialed in at least 11 provinces. In one scenario proposed by the Food and Agriculture Organization of the United Nations, the U.S. could supply up to 90% of the required ethanol. While the potential windfall for U.S. farmers and ethanol producers would be enormous, considering the potential demand for billions more gallons of annual ethanol production, normalized trade between the U.S. and China remains elusive.